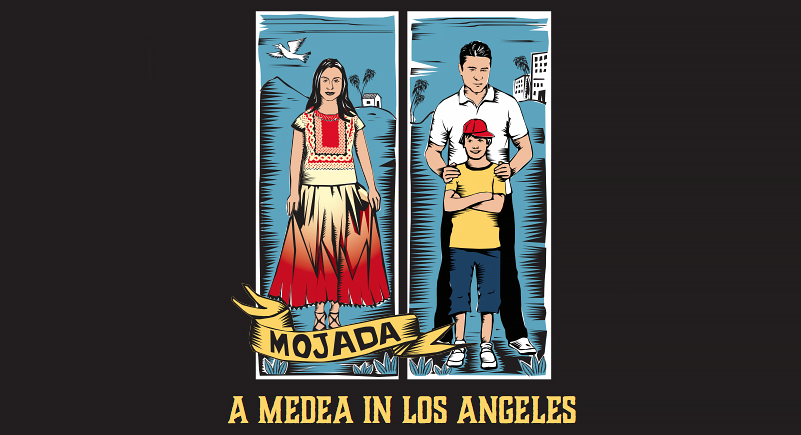 I think its super important to have that next generation come see a play like this. Not just my play, but also to come to the theater to wrestle with the big ideas of our society, to sit in a communal space, and to learn the ritual of theater. In some way we go to the theater to learn to be better people. — Luis Alfaro

At a time when the bombastic politics of Donald Trump are dehumanizing and vilifying Mexican immigrants, Luis Alfaro’s new play gives audiences a much-needed human perspective on migrants in Los Angeles. Alfaro brings into sharp relief the tragedies undocumented workers face, and the sacrifices they make in order to work in the United States.

The Getty Villa in Malibu is the perfect setting for Alfaro’s new play, Mojada: A Mexican Medea in Los Angeles. The Getty Villa opened in 1974, modeled after the Villa of the Papyri at Herculaneum, it’s an architectural anomaly—nestled at the foot of a Pacific Palisades hill populated by suburban stucco post-war homes. But it is Los Angeles, after all: the land of illusions and fantasies, a triumph of the hyper real, more real than reality. And so is Alfaro’s new play: It is a contemporary Latina/o adaptation of Euripides’ play, Medea, first performed at the City Dionysia Festival in 531 BCE. The piece is best known for its dramatic climax wherein the protagonist murders her children to spite her unfaithful lover, Jason, who has left her, a barbarian, to marry the daughter of the King (who Medea also kills). The theme of prolocide also has uncanny resonance in Mexican and Mexican American culture, particularly as it recalls the mythology of La Malinche and La Llorona (the Weeping Woman), whereby the Spanish conqueror Hernán Cortés, rejects his Indian lover, Malinche, for his Spanish wife when he brings the Spanish noble woman to Mexico to occupy his palace. Like Medea, Malinche kills the children of her imperial lover, and her own, to spite him. But in Malinche’s case, she drowns them, explaining why her ghost often inhabits bodies of water, searching for her children while weeping.

The narrative arc of Alfaro’s Mojada is consistent with the main plot points in the original. The mandate of the Getty Villa is to promote Greek and Roman culture so there had to be consistency. “The Greeks did it all,” he tells me over breakfast at the Farmer’s Market in Beverly Hills. “They tackled all of life’s great questions. When I do an adaptation of a Greek play I just make it relevant for today’s audiences.” Indeed, the play is a hybrid between the old and the new, bridged by eternal and universal human impulses: love, hatred, sex, fear, greed, desire, ecstasy, and death. Religious and spiritual issues. No doubt his robust fusion approach to play adaptation reflects his own upbringing marked by religious hybridity, he was raised in both Pentecostal (Apostolic) and Roman Catholic churches: “Mostly Pentecostal with a bit of Catholicism,” he says. His mother, the Pentecostal, would take him to church on Saturday nights. On Sundays he was an altar boy at the Catholic church he attended with his father. As a result, religious themes saturate his work: the drama of the Pentecostal service, with the “testimonio,” the testimony where congregants publicly narrate their triumphs and tragedies testifying to God’s grace and to their mighty faith; combined with the rich pageantry of Catholic ritual.

One of his major concerns is fate versus self-determination. How much can humans really control their lives, and what is left to chance? Last year he wrote and produced a play on Pentecostalism entitled Delano, it is one in a trilogy he calls “The Golden State.” It was staged at San Francisco’s Magic Theater. Much of the narrative emerges through the testimonio. It explores some of Alfaro’s most pressing concerns: morality, suffering, family, and agency. It asks about the existential conditions of possibility for leading lives of extreme moral self expectation under conditions not of one’s own choosing. The results are tragic. Similarly, this past February I saw him perform his one man show, St. Jude, in which he tells the story of caring for his father, after his father’s Cancer diagnosis until his death. He asks the tough question about the artificial prolonging of life: who does it serve? The piece is peppered with flashbacks. In one, as a child he receives the Holy Spirit and breaks into typical Pentecostal ritual: trembling and shouting halleluiah, he claps his hands in frenzied rhythm until he breaks into glossolalia—a seemingly involuntary tongues speech that leaves the audience entranced. In another scene, Alfaro arrives at a Christmas dinner to find his entire family waiting for him with the intention of asking him to accept Christ as his personal lord and savior (and to presumably reject the gay life style). He leaves immediately in quiet disgust.

Alfaro was raised in the Pico Union neighborhood of downtown Los Angeles, one of the most dangerous in the city, in what he describes as “extreme poverty.” Yet he tells me this without wiping what seems to be a permanent smile from his friendly round face, which is a perfect complement to his soft round body, topped by a sporty trilby hat of checkered Scottish tweed. Speaking with him is more like listening to a riveting monologue that engaging in an actual dialogue. I interrupt only to prompt him to switch topics. I’ve known him since the 1990s, but I find him immediately likable. He is either grinning, smiling, giggling, or breaking into a hearty guffaw. “I’m happy,” he tells me as he struggles to eat his giant waffle topped with bananas in front of the loteria iconography that adorns one of the stalls at the trendy west side eatery. He seems anxious, but not stressed. He doesn’t rush even as his demanding schedule consists of media interviews and more rehearsal before the third night of previews opens at 8:00 PM. At the previous night’s performance one of the actors skipped significant text he tells me. I ask how he will handle the situation. “Well, first I’ll pull them aside and ask what is going on and if there is anything I can do. Then I’ll listen. Then I’ll ask them not to blow it for me, for us, for all of us.” He may be lovable but he is serious, circumspect, professional about his art.

Alfaro has many credits for his work, but perhaps chief among them is a MacArthur “Genius Grant” in 1997, forever credentialing him as one of America’s premier artists. These days he is juggling his time as an author in residence at the Ashland Shakespeare Festival, and as Associate Professor of Theater at the University of Southern California. He also has numerous commissions for new plays. (I tried to friend him on Facebook recently but instead received the message that he had reached the allotted number of friends so I could only follow him. That was good enough.) Mojada is his most recent. It is the third in a series of adaptations of Greek tragedies into Latina/o contexts. In 2004 he adapted Euripides’ Electra into Electricidad. In 2010 came Oedipus El Rey, an adaptation of Sophocles’ Oedipus Rex. This time, the title Mojada, was a risky choice that provoked some controversy in the community; it is a derogatory way to refer to undocumented migrants, literally a wet woman (or man, “mojado,”). The term is usually translated as “wetback.” Alfaro smoothed over tensions by explaining his reasoning for using the term in public forums.

This work certifies Alfaro as a modern myth-maker, especially since no myth begins from a tabula rasa, but builds on previous sacred stories of hope and despair, triumph and tragedy to explore the realities and possibilities of existence. In this case, it’s about the tragedy of assimilation at three stages. The titular character, “Medea,” is barefoot throughout the entire production, signifying her barbarism. She cannot assimilate. Hason, the antihero, is attempting to assimilate, while Hason’s boss, Armida, has successfully assimilated by American terms: she is a wealthy real estate tycoon. Armida represents Glauce, the Princess of Corinth for whom Jason leaves Medea to improve his fortunes.

The play opens with Tita, the elder curandera, or spiritual healer, conducting a mystical invocation with a pair of giant banana palms and reciting a prayer in Nahuatl. Indeed, a mystical element runs through the entire play. Medea is a curandera herself with an unlikely medium through which to exercise her skills: she is a magical seamstress who works from home. Alfaro infuses the play with a healthy dose of Latin American magical realism, whereby the realms of magic and reality dance with one another. Even while the play is a tragedy in the fullest sense of the word, it avoids becoming maudlin. Alfaro achieves this through adding a comedic element to the dialogue and situations. In fact, the play is peppered with humorous moments throughout, until the final tragic sequence of events.

Even apart from the murders that are the plays dramatic climax, perhaps the most tragic and horrific events are visited upon Medea and her family as they are making their way across the border in a chilling flashback. They nearly suffocate in the back of a sweltering truck crowded in with dozens of other immigrants. They are stopped by the Mexican military who abuse and rob them, pointing pistols at their heads. Medea and another young girl are raped. They are abandoned in the middle of the desert. Only miraculously, with the help of Tita’s faith and skills, do they make it to the other side; it’s the kind of faith that can move mountains.

In general, the play shows the cost of assimilation. When Hason tells Medea that his attempts to assimilate are in the best interests of their young son, Acan, he says that Armida can give him a future. “I can give him his past,” Medea retorts. “In this country you don’t need a past,” declares Hason. Indeed Alfaro tells me that Medea slays Acan not to punish him, but to save him.