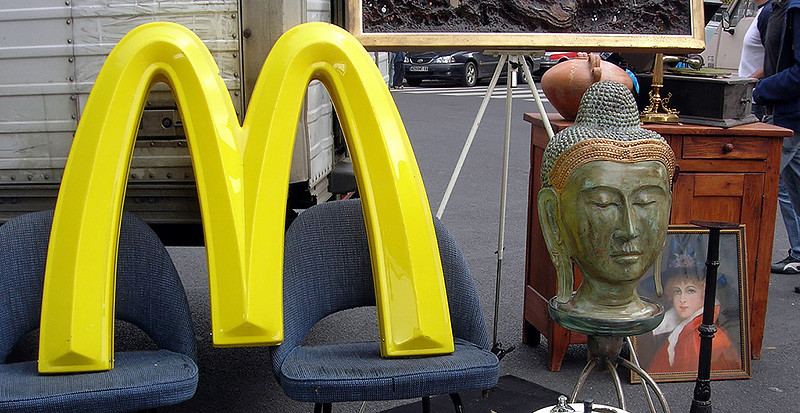 My wife and I stepped into a home furnishings store in Arcata, California, this past May. We weren’t necessarily looking to buy much, but with an upcoming move to Philadelphia we were checking out furniture styles and seeking decoration ideas for our new home. We were on vacation and needed a bit of a break between brunch and a hike, so a little idle consumerism seemed like an appropriate midday activity.

As I wandered from one end of the shop to the other, I examined barware and some pretty nice end tables while playing a game to pass the time. The only rule was that I had to count the number of buddha heads I could see from any given vantage point on the showroom floor, trying to maximize the total number I could spot. The busts were ubiquitous, made of some sort of faux marble and ranging from a few inches to about a foot or so in height. I don’t remember now how many there were in all, but it would not be an exaggeration to say that I could stand anywhere in the store and count buddha heads into the double digits. There were dozens. It was initially unclear whether they were part of the store’s décor or part of its sales inventory, but it dawned on me that they were probably doing double duty as both.

Just as some retail establishments will maintain their thermostats slightly above a comfortable temperature to encourage people to make impulse buys, and just as IKEA will wear down consumer resistance by making people physically walk past the entire store catalogue in a carefully scripted pilgrimage, this particular store lulled customers into a sense of complacent consumption by providing omnipresent physical reminders of non-acquisitiveness. The serene countenance of the Buddha blissfully absorbed in supreme unexcelled awakening said nothing at all, but his familiar visage nevertheless offered a hortatory message.

“Go ahead and buy it,” the silent statues seemed to say. “No materialism here.”

Over the past several weeks, my wife and I have made numerous trips to retail stores to scope out potential furnishings for our new house. We’ve been shopping in chain stores and boutiques on both coasts and in Midwestern cities large and small. We’ve spent hours poring over this rug or that one, these drapes or those. Our relatively ascetic twenty-something selves—the dreadlocked vegetarian who eschewed deodorant and preferred to sleep in a nest of blankets on the floor rather than buying a bed; the nose-ringed field biologist who spent multiple twelve-day periods without showering while conducting seabird research and fending off wild bears in Alaska—would be appalled if they were still around.

The Buddha’s presence has been a surprising constant in many of the stores we’ve visited. I’ll be stroking the fibers of a carpet made by the hardworking indigenous folk of wherever and look up to find his familiar face gazing down at me, half-lidded, from a shelf. I’ll plop down in a chair to feel its seductively curved walnut arms (and rest my tired feet) and there he is: a disembodied head on the side table next to me. His presence does not grace every home furnishings store, but there is a pattern that I now find difficult to overlook. Urban Outfitters. CB2. Bed, Bath, and Beyond. World Market. While few of them are as over the top about it as the store we visited in Arcata (Pier 1 Imports comes pretty close), many of them have shrines to this high god of capitalism.

But why the Buddha? As far as I’ve seen, Jesus doesn’t really appear in stores like these (probably too blatantly pious in America), and gestures to Islamic art are usually pretty oblique. (Our “Morocco” headboard from West Elm was made in Muslim-majority Indonesia and only vaguely resembles authentic Moroccan woodwork, but we nevertheless like the way it looks and it happens to match a beautiful brass lamp we picked up in Fès a few years back. Edward Said would probably roll over in his grave.)

It certainly seems true that the Buddhist modernism of today allows corporations to (somewhat paradoxically) link notions of individualism and interconnectedness with Orientalist fantasies about “exotic Asia” and subtle exhortations to spend more money. Tranquility and rustic simplicity can be yours with the click of a button or the swipe of a card. The proper noun “Zen” (more than 13,000 hits in the Home Décor & Accents section of Amazon) has become an adjectival descriptor of baby furniture and towel bars. Sanitized understandings of Buddhism as a non-acquisitive, irreligious “philosophy” initially developed as part of a concerted propaganda effort to help the tradition reach new audiences outside of Asia; today, the same hackneyed stereotypes help Buddhism reach an ever-broader clientele through the conspicuous consumption of kitsch. The Buddha himself may not be a brand, but shoppers brand themselves as reflexively aware, non-materialistic consumers when they adorn their gardens, bookshelves, and bodies with his image.

The obvious move to make at this point would be to say that consumers and marketers have gotten Buddhism wrong, that Buddhism is distorted by mass marketing, that “real” Buddhism is not characterized by crass consumerism. This conservationist impulse to protect “real Buddhism” from hybridization or bastardization is almost certainly a lost cause, not only because there was never a pure tradition to begin with, but also because Buddhism does not merely survive—it thrives—in a capitalist framework. It is therefore not the case that shrewd corporations have taken over an originally pure tradition and manipulated it to do their dirty work. Rather, Buddhism has quietly infiltrated mainstream consumer culture through its time-honored technique of helping potential audiences get in touch with Buddhist truth through material items and accessories. Corporations certainly capitalize on the Orientalist chic of Buddhist imagery, but they also proselytize on the religion’s behalf through the busts of Śākyamuni that grace their showroom floors. Shoppers’ understandings of the intricacies of Buddhist doctrine may be vague and their perceptions of Buddhist practice hazy, but as long as people buy into the idea that Buddhist accouterments signify one’s desirable lack of desire, Buddhism flourishes. In the immortal words of Tyler Durden, “the things you own end up owning you.”