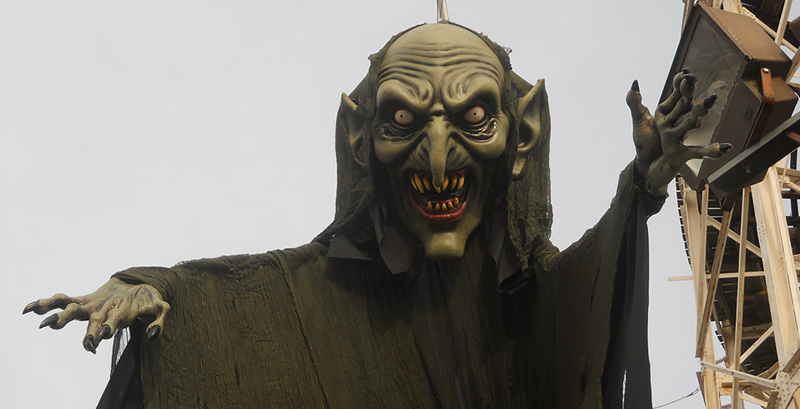 In my first year of graduate school, I lent my middle sister all of my Harry Potter books. I loved the books that I had read so far. I imagined that she might too. She’s almost six years younger than me and at the time lived at home with our parents. When I later asked whether she enjoyed the books, she quickly explained that our mom had moved the books out of the house to the shed, yards and yards away. More intrigued than surprised, I asked why. Harry Potter was apparently a problem. The pastor of the Pentecostal Church that my mother and sisters attended apparently had concerns about the young wizard and his burgeoning popularity. The pastor told the congregation that Harry Potter would lead their children astray. Reading the books was the first step in a path that included witchcraft, inviting demons in your life, and a remarkably unpleasant afterlife.

I never saw the books again. They are no longer in the shed; my sister, determined to read the forbidden texts, checked. 13 years later, I still haven’t asked my mom what happened to my beloved hardcovers. I’m afraid to ask. My sister, a huge fan of Harry Potter, now drinks her coffee out of an “Accio Coffee” mug. I may have bought it for her.

This brush with the demonic returned to me as I read and reread Sean McCloud’s American Possessions: Fighting Demons in the Contemporary United States (Oxford 2015), but Harry Potter wasn’t my only encounter. A member of my mother’s former church feared that my study of religions would lead me to participate in “satanic religions” like Hinduism or Buddhism; my mom, thankfully, ignored her. In high school, a fellow trumpet player spoke of spiritual armor and warfare while condemning non-believers to the fires of Hell. And then, there was the Baptist preacher who told my biological father that what ailed him was not his diagnosed bipolar disorder, but evil spirits and sin. Prayer replaced lithium.

While other readers of McCloud’s book may find demon-fighting Protestants remarkable or unusual, I was already familiar. This familiarity makes American Possessions, already a very important book for American religious studies, feel even more necessary. When talk of demons, possessions, and exorcisms appear in the news cycle, popular culture, or even in scholarship, the practitioners often appear as punch lines to an easy joke or as the targets of snarky commentary complete with skeptical looks and occasional guffaws. “Who could possibly believe in demons?” is the unasked, but implicit question. Instead of relying on snark and incredulity, McCloud approaches these Protestants who find and fight demons seriously as a key example of religious culture in America in the twenty-first century. Third Wave evangelicalism, a “loose-knit collection of neo-Pentecostal, charismatic, independent and denominational evangelicals,” emerges as the case study to think about how we research, describe, characterize, narrate, and analyze American religion (3).

American Possessions offers a primer in the practice of “spiritual warfare.” Practitioners destroy CDs, books, toys, and other objects that are tainted by evil spirits. They pray over maps of foreign countries and continents, especially Africa, to rid these geographies of demons and pray in homes and neighborhoods to banish evil spirits. They practice deliverance, evangelical versions of exorcism. Third Wave theology centers on the reality of God, Satan, and “the spiritual world” (11) and further asserts that we are living in the end times. Since the end is drawing near, Satan employs demons to pester, bother, and attack humans as methods to gain more souls for Hell. To do battle with Satan and demons, practitioners created spiritual warfare handbooks which emphasize deliverance, spiritual mapping (ridding spaces and places of demons), and spiritual housecleaning (rituals regarding objects, homes, and properties that are demon-infested) as methods to banish demons.

Demons, we learn, never disappear permanently; they are always looking for an opening. These malevolent entities enter lives via trauma, abuse, and sin, but they can also be passed down from one generation to another. Familial history becomes just as crucial as personal actions. Demons are forces of habit that must be broken again and again. No place, no person, is ever safe. Spiritual warfare manuals identify the host of dangers as well as draw boundaries for a righteous life. Unsurprisingly, practitioners find satanic conspiracies everywhere, yet they particularly target popular culture, New Age movements and products, and Catholicism. Any religion that does not fall within the Third Wave is satanic, and authors of spiritual warfare manuals proudly profess intolerance as a virtue.

Satan and demons appear as serious problems that must be eliminated. The world around us emerges as antagonistic and full of peril. Safety is elusive and temporary. Demons target everyone, if we refuse to acknowledge their presence. Practitioners can see the signs that the end is near everywhere: for example, they issue warnings about people who listen to heavy metal, wear silver jewelry, and have piercings and tattoos. (My fashion aesthetic seems to signal the demonic. I never realized.)

Yet, the Third Wave manuals mimic the grimoires that make them nervous. In their search for purity and labeling of danger, they blur boundaries rather than making them clear. In fighting evil, their methods mimic those destructive forces that they fear. While they condemn popular culture, their approaches to demons evoke the popular ghost-hunting reality television shows. Their attempts to be distinct actually lead Third Wave practitioners to incorporate more of the world around them. In their boundary-making and fight against satanic influences, this movement is not different from other forms of American Christianity. What McCloud makes clear is that while Third Wave, on the surface, might appear distinct from a Methodist coffee hour, the movement resonates with larger trends of supernaturalism in American religions. Puritans, after all, imagined and embodied worlds of wonder. It might be tempting to dismiss the Third Wave as an outlier, but McCloud demonstrates that demon-fighting Protestants are indicative of American religious culture.

Our current moment, McCloud explains, is possessed. Possessions, by both demons and consumer goods, define not only American religion, but also U.S. culture more broadly. Rather than follow tired narratives in which religion appears in opposition to capitalism, or institutional religion is seen to be on the (perpetual) decline, McCloud traces three key threads, the consumerist, the haunted, and the therapeutic, that all meet together in the Third Wave. Starting with the first thread, he writes, “consumer capitalism shapes our conversations, habits, relationships, and fantasies” (15). Consumers pick and choose lifestyles that best represent who we think we are with little regard to historical context or the structures that shape our lives. Cultural forms, like religion, also emerge as commodities that we select, dismiss, contest, or try again. Cultural capitalism structures our lives and provides the language to speak of identity and agency.

We possess, but we are also possessed. McCloud notes that we also live in “the haunted present,” in which the paranormal and supernatural dominate not only reality television and popular culture but also surveys and polls about religion in American life. Americans confess to pollsters that they believe in angels, demons, ghosts, and aliens. Despite consumer capitalism’s insistence that we are autonomous agents who choose our lives, the haunted present suggests how history, family, community, and institutions weigh heavily on us even as we hope they don’t. “[T]he repressed that returns,” McCloud explains, “seems to be history” (17). Practitioners of the Third Wave can’t escape their social, familial, and material locations, and neither can we. Yet, we all try in our craftings of self.

The final theme, then, is the therapeutic, those dominant discourses of how to improve our feelings, attitudes, and relationships. The therapeutic proclaims that the solution to our problems resides inside ourselves. The self becomes the site through which we negotiate the contradictions and expectations of modernity. Relying on social theorist Eva Illouz, McCloud argues that the self becomes both “the problem and solution for the ills of contemporary life” (17). The focus on fixing one’s self often ignores the external realities that need repair. If we can only fix ourselves, then everything else will follow.

Third Wave practitioners are the perfect case study for that thing we call religion in early twenty-first century America. McCloud’s book offers a refreshingly complicated view of American religious culture that seriously engages neoliberalism’s impact. What happens to religious culture when consumer capitalism shapes our habits, language, and lives? American Possessions points us to answers that we, as scholars and as people, ignore at our own peril. McCloud also illuminates the significance of exploring the “darker side” of religious studies (4). In American religious studies in particular, there’s been a historical hesitance to study people and movements that many find unsavory and politically distant. McCloud emphasizes the need for scholars of American religions to recognize that spiritual warfare manuals are just as much “archival material” as sermons, diaries, and proclamations by religious authorities. I agree with him.[1] We miss out on how Americans create, understand, and maintain religion when we avoid subjects of study that discomfort us, and more scholars who study the “dead serious doom and gloom of American religion” (4) will surely help. Doom and gloom are as much a part of the history of American religions as the vaunted narratives of freedom and pluralism. We do ourselves a grave disservice by examining only the religious expressions that people find noble and inspiring.

Demon-fighting Protestants can show us much about twenty-first century America, if we stop to pay attention. We really need to. Welcome to the dark side.

Kelly J. Baker is a freelance writer with a Religious Studies PhD who covers higher education, gender, labor, motherhood, American religions, and popular culture. She is the author of Gospel According to the Klan: The KKK’s Appeal to Protestant America (2011) and The Zombies are Coming! (2013). She can be followed @kelly_j_baker.

[1] McCloud cites my book, Gospel According to the Klan: The KKK’s Appeal to Protestant America, 1915-1930, and Jason Bivins’ Religion of Fear: The Politics of Horror in Conservative Evangelicalism, as key examples of scholarship about the darker side of religious studies.