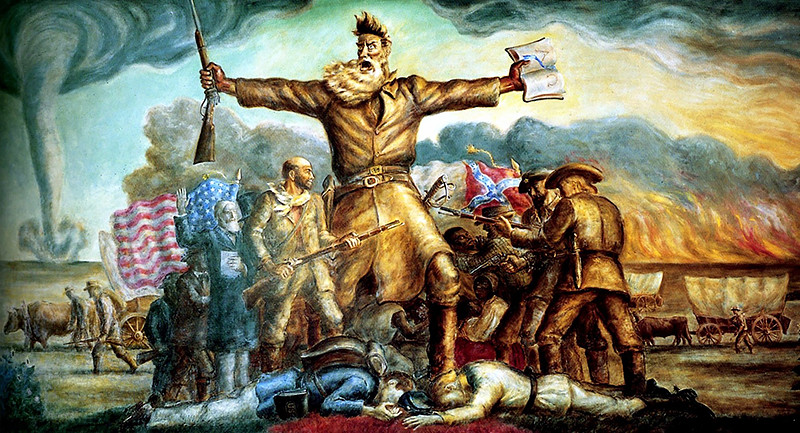 In our interview series, “Seven Questions,” we ask some very smart people about what inspires them and how their latest work enhances our understanding of the sacred in cultural life. For this segment, we solicited responses from Ted Smith, author of Weird John Brown: Divine Violence and the Limits of Ethics (Stanford University Press, 2014).

The deepest roots of this book, Weird John Brown, are in my attempts to think about how to live as a white man in a United States that is so deeply disfigured by slavery and its legacies. I’ve been connected to a multi-racial congregation for about fifteen years now. It’s a community that can sustain uncommon candor in conversations about race. Some time ago I heard an African American member say that his grandmother had told him that John Brown was the only white man he could ever trust. That sentence riveted me then and stays with me now. I’d known about Brown, of course. But after that night I started reading and listening with new intensity. I’d been thinking about Brown for more than a decade before I ever started the book.

The second source of the book was a fascination with Walter Benjamin’s “Critique of Violence.” I read this essay in the course of writing my first book, The New Measures. I was both mystified by it and drawn to it. I knew that it was too much for me to take in at the time. But I also knew I had to go back to it when I had more time and, frankly, more understanding. My meditations on that essay infuse the whole book.

The book also grew out of a constant, low-grade irritation with talk about religion and violence in the wake of the 9/11 attacks. It seemed like almost everything I read took for granted that our thinking about politics should play out within the frame of a certain kind of ethics. The only question was whether religious beliefs and practices could help confine violence within that frame or could sanction violence beyond that frame. (The answer, of course, is both.) The disagreements seemed deep, on one level, but what struck me was how much the two sides agreed on the terms of the debate. In their agreement I think they were missing the most important questions posed by the terrorist attacks. Even more, I think they were engaging in a kind of reasoning that mystified the attribution of sacred qualities to the state and legitimated the expansion of state violence.

Weird John Brown depends on a contrast like the one Søren Kierkegaard made between “the religious” or “the theological,” on the one hand, and “the ethical,” on the other. The ethical, in the sense I’m using it here, centers on norms that are at least potentially universalizable. These norms might be grounded in appeals to law, justice, rights, human flourishing, or any number of other sources. What they share is a form that stretches to apply to all people in all situations. By contrast, the religious or theological, at least in this sense, involves radically singular kinds of reasons that can’t be pressed into generalizable norms. Kierkegaard reads and rereads the story of Abraham planning to sacrifice Isaac on Mount Moriah in order to press the reader out of any merely ethical reading of the story. Divine or demonic, it demands to be read in a theological register.

I try to read Brown in an analogous way, with Harpers Ferry as something like an American Mount Moriah. I try to engage him on his own terms. That means thinking in this theological register. I think we need this kind of reasoning, a reasoning that can think about exceptions, a “theological” or “religious” reasoning that does not reduce to ethics. I think we need it especially as we grapple with the unique role that state-sanctioned slavery has played in the history of the US.

What I most want readers to take from the book is a way of seeing the world. I worry that the ethical mode I sketched above has captured our imaginations, especially when it comes to thinking about politics. I don’t want to do away with that mode. I think it has done and can do great good. But I do want to show its limits. And I want to press towards another, more fully theological, way of seeing the world that I think can complement the ethical.

I’d like readers to see differently in three instances, especially.

I hope readers see that the usual, ethical readings of Brown cast him as a freedom fighter or a fanatic, and that both of those modes assume the legitimacy of the state’s monopoly on violence. I hope I can persuade readers to see Brown instead in categories that can’t be reduced to ethics. I want them to see him as what Benjamin called a “Great Criminal.” I want them to see him as Herman Melville saw him – as a sign, a portent, a person who is weird.

I also hope readers bring this theological vision to their thinking about the ongoing systemic violence of racism in the United States – violence so deep and so particular that I don’t think it can be addressed only by generalizable norms. Consider the notion of pardon for slavery. As an ethical imperative, it is worse than wrong, not even something to be hoped for. Even as an exception it is obscene. But just seeing this pardon as an exception that cannot be made makes possible a different kind of politics.

And I hope readers come to see the terrible ironies that can unfold when we try to iron every exception out of our reasoning. The Obama administration, for instance, made a signature commitment to bringing all of its responses to global terrorism within the rule of law. This seemed like progress after the Bush administration’s abuses of executive privilege. But notice what happened: so many of the policies that the Bush administration undertook as exceptions continued under the Obama administration, only now with the additional legitimacy that came with being wrapped in law. Detention at Guantanamo moved from a temporary, irregular action that depended on dubious notion of executive privilege to a legalized status that lets it serve as a precedent.

4. Who are your inspirations or intellectual models for you as you wrote this book? Three authors especially inspired my thinking in this book. Even more, they inspired my attempts to find a style to suit what I was trying to say.

W.E.B. Du Bois wrote his biography of John Brown in the first decade of the twentieth century, the same decade in which he wrote The Souls of Black Folk and helped found the Niagara Movement (at Harper’s Ferry). I learn from everything I read by Du Bois. But his writings from this period are incandescent. I think he manages to craft a vision of Brown that is every bit as “theological” as the one developed by the abolitionist hagiographers who wrote right after Brown died, but without falling into the traps that too often caught them. He keeps economics always in view. He does not see Brown as some kind of white savior. And the theology in his vision does not curdle into a sentimental fundamentalism. I still don’t really know how he does it.

Walter Benjamin has done more than anyone else to help me see what it means to think eschatologically. I don’t mean to suggest that I share a religious tradition with Benjamin. I identify as a Christian with broadly Reformed instincts. Benjamin’s own identities are irreducibly complex. He drew on Jewish mysticism, Romanticism, Marxism, Surrealism, and more. However, you want to define his convictions and identities, they are not identical to mine. But he has been invaluable as a conversation partner in a kind of interreligious dialogue. He developed ways to think about history and theology together without reducing either to the other. This is the kind of vision that can survive when history runs off the rails.

Like Du Bois and Benjamin, Marilynne Robinson finds ways to describe the empirical world as shot through with theological significance. And like Du Bois, she writes beautifully about John Brown. Brown does not appear “on stage” at any point in her novel Gilead. But he comes near to the point of view. He can be heard. Traces of his visits remain after he departs. He bends the whole narrative across multiple generations. He does not appear in the book, but he haunts it. This may be the best way to write about Brown.

What was the most difficult thing about writing the book? Did you encounter any unexpected problems or challenges?

The most difficult thing was figuring out the genre to do the work I felt like I needed to do. In this book and in The New Measures, I am trying to write theology and history on the same page. But most of the genres for history in our time have been constructed in ways that make a theological perspective alien to them. And our most common genres for theology tend to have great difficulty making contact with the material world. Too many of the examples that we do have of writing theology and history together slip into a fundamentalism that I want to avoid. I don’t mean to suggest that I’m alone in this effort. There are lots of people who do or have done something like what I’m trying to do. Du Bois, Benjamin, and Robinson, only begin the list. Still, I have felt like I have had to modify the genres I’ve received or create new ones to do the work I want to do.

What’s the most unexpected response, critical or positive, that you’ve gotten about the book?

I had a totally unexpected email from a Catholic attorney who represents U.S. citizens accused of terrorist crimes. He said he’d stayed up most of the night reading the book and that it helped clarify some of the deeper dynamics that he thinks are at work in his cases. I learned a lot from his note. I’m hoping we’ll continue the conversation.

With this book done, what’s up next for you?

I received a grant to convene some very diverse groups for conversations about the purposes of theological education. Those conversations took me to places like a mega-church in Southern California and a Hispanic Bible Institute in Philadelphia. They provoked something like a Copernican revolution for me – the movements and institutions that I had thought were the center around which everything else revolved suddenly came into focus as a small few of the many bodies in motion around a very distant sun. I knew this statistically before I started, but now I know it in a deeper and more personal way. Right now I’m writing out of those conversations and the reading and reflection that have gone along with them. And I’m trying to develop the right kind of project for getting a wide variety of people to continue these conversations in print.

Ted A. Smith is Associate Professor of Preaching and Ethics at Emory University where he researches the intersections of practical and political theology, with special attention to the forms preaching and worship take in modern societies. He is the author of The New Measures A Theological History of Democratic Practice (Cambridge University Press, 2007) and Weird John Brown Divine Violence and the Limits of Ethics (Stanford University Press, 2014).

Editor’s Note: The featured image for this article is Tragic Prelude, a mural portion by John Steuart Curry for the Kansas Statehouse. Our use is for educational and non-profit purposes only.