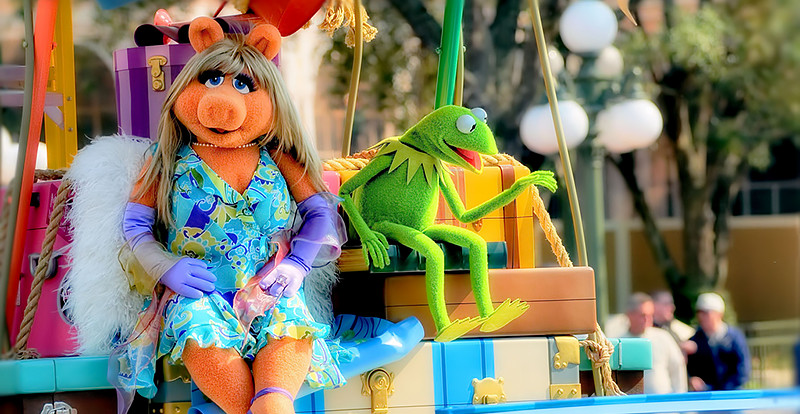 The Muppets are back on TV, and now seems to be a good moment to talk about how they represent what America is, not what it was. Their recent family news and music videos display the multi-cultural United States that is our new normal.

First, of course, is the shocking news that Kermit and Miss Piggy have broken up, and that Kermit has a new girlfriend. It is a sad day, but also speaks to the fact that the US has a high divorce rate. We have yet to see how the working relationship survives between Kermit and Piggy. The Pope’s easing of the rules of annulment is also an acceptance of the number of divorces and break-ups in this country. While Modern Family may hold the crown for most interesting blended family situations, The Muppets do not start us in medias res. We are witnesses to the decades-long courtship, failed marriage, and broken relationship.

Their videos are more interesting with respect to their conception of America. One of my favorites is their cover of “Bohemian Rhapsody,” by Queen. The lead singer of Queen, Freddy Mercury, was born Farrokh Bulsara. He was of Zanzibari Parsi descent, which meant that his family practiced Zoroastrianism, and they were from Gujarat in India. He had influences of South Asia, East Africa, and England present in his music; this included Islamicate references, as he grew up in a predominantly Muslim cultural context in Zanzibar. While not on the version The Muppets do, the phrase “bismillah,” (in the name of God, which opens chapters of the Qur’an and Muslim worship) appears in the full song. Queen also did a track called “Ya Mustafa,” a reference to Prophet Muhammad.

I read The Muppets’ choice as signifying that immigrants offer something great to America. Here is this gay, British, HIV+ performer, influenced by Muslims, sharing his cultural background with the US, and we welcome it and absorb it into our own culture. Listening to Queen’s “We Will Rock You” at a sporting event is as expected as the national anthem. It is a hopeful vision of what America’s immigration policy could be like, and the ways in which immigrants have already enriched our country.

“Pöpcørn” is another homage, this time to European electronic dance music (EDM) and its impact on American culture, but it just brings up too many memories of Sprockets to be able to analyze it properly. The cover of “Ode to Joy” is a clear reference to A Clockwork Orange, and with the advantage of hindsight, a mockery of the fears of crime waves by foreigners. It is a good set-up for their cover of “Jungle Boogie,” by Kool & The Gang.

In this clip, Sam the Eagle, the embodiment of America, resists participating in, or even acknowledging, black culture. However, he eventually realizes that a distinction between American culture and black culture is meaningless. There is no American culture without the historical presence of Blacks in this country. It is symbolic of Sam broadening the definition of what it means to be American, which is a diverse and creative space. Dr. Teeth and The Electric Mayhem, who perform the song, are an eclectic mix of individuals who are brought together by a common cause; in this case, it’s the music.

The Muppets offered us biting social commentary when their show began nearly forty years ago. Now, with their videos, they are showing us an antidote to the xenophobia infecting our political and popular discourses. In their videos, they are offering a hopeful and positive vision of America, which includes all of the people living in it — divorced, gay, Muslim, black, etc. — a message that will hopefully be even more explicit in their show.