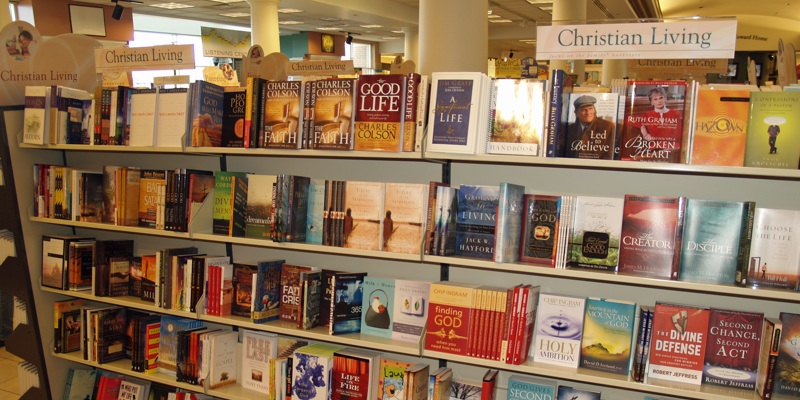 In our interview series, “Seven Questions,” we ask some very smart people about what inspires them and how their latest work enhances our understanding of the sacred in cultural life. For this segment, we solicited responses from Erin A. Smith, author of What Would Jesus Read? Popular Religious Books and Everyday Life in Twentieth-Century America (University of North Carolina Press, 2015)

The immediate trigger launching the book was my teaching. For many years, I have taught a course at the University of Texas at Dallas on the history of American popular culture. The final project for this course is an ethnography investigating some aspect of the student’s own popular culture. In the early 2000s, I started getting many more projects on Christian rock music, inspirational popular novels, and other forms of religious mass culture. “What’s up with that?” I thought.

Around the same time, I was making a twice-yearly drive from Dallas to Chicago to see my family. I checked out books-on-cd from the public library to keep myself awake and entertained during the trip. The shelves at my suburban Dallas Public Library were crammed with Christian fiction—Left Behind, Frank Peretti’s This Present Darkness, Janette Oke’s Love Comes Softly, and others. Moreover, a cursory look at historical bestseller lists from the 1890s onward (which seriously understate the popularity of religious books) evidenced more books like these. Nevertheless, nobody seemed to be thinking much about them in a scholarly way. To the extent that such books were considered at all by academics, it was to dismiss them as bad books—aesthetically lacking, theologically bankrupt, full of historical inaccuracies. They were—at best—a waste of time, and—at worst—potentially dangerous in their effects. “Why would so many people read such extraordinarily bad books with such intensity and passion?” I asked myself. What Would Jesus Read? was an attempt to answer that question.

“Religion” (or—for my purposes—“lived religion”) is about how ordinary people make meaning from the chaos of daily life and how they craft narratives—individually and collectively—about how they relate to the divine, to other people, and to their own souls. I generally accepted whatever working definition of religion (often implicit) readers, authors, and publishers embraced for a particular period. Often, I traced debates over whether key texts in popular religion [think: Norman Vincent Peale’s The Power of Positive Thinking (1952) or Bruce Barton’s The Man Nobody Knows (1925)] were—in fact—“religious” at all or merely a bastardized or dumbed-down version of religion that turned it to the purposes of secular profit and progress.

“Sacred” was a term I consciously wanted to complicate. We are accustomed to separating sacred from secular, but what interested me was the way ordinary readers appropriated mass-produced books to pursue sacred ends, or the ways sacred/religious books could be harnessed to pursue secular purposes (usually social status or economic success). I purposely excluded sacred scriptures from the study, because I wanted to investigate the messy relay between the commercial and the transcendent. Religious bestsellers were both commodities and sacred texts, and readers often found no conflict between the two.

Richard Brodhead’s study of nineteenth-century American literature, Cultures of Letters (1993), helped me think about how different kinds of books and different kinds of readers could exist in relationship to “literature.” More interesting than which books were “good” and which were “bad” was the way authors situated themselves and were situated by religious, educational, political and commercial institutions as citizens of the republic of letters.

The early scholarship on “lived religion” from David Hall and Bob Orsi was immensely important to me in thinking about the everyday practices of lay people as carrying religious, moral, and political weight.

Finally, the work of Colleen McDannell, David Morgan, and Leigh Eric Schmidt inspired me to think about the intersections of consumer culture, religion, and popular texts. Their rich, nuanced studies of how ordinary people made religious meaning from commercial/popular artifacts inspired me to think differently about books and about the religious identities constructed—in part—through engagement with consumer culture.

My biggest challenge was what I have come to call “disciplinary fundamentalisms.” In the course of writing the book, I did “close readings” of popular texts; dug through the archives for promotional materials, the business records of publishers, letters from readers to authors, authors’ drafts and papers; did surveys and interviewed readers; read reviews in periodicals and on Amazon.com; looked at advertising and reviews and coverage of religious books in secular and religious periodicals. Academic readers/listeners were troubled by this “crazy” methodology, since it was neither literature nor history nor ethnography nor sociology of religion. I had to learn to be clear about the ways these diverse sources functioned together to answer an interdisciplinary question about how ordinary readers made meaning from popular religious texts.

Although I am committed to writing in an accessible and engaging way, I have been surprised at the interest in What Would Jesus Read? engendered outside academic circles. I have had a great time giving talks to community groups, addressing audiences in retirement communities, and chatting with my neighbors and parents of friends about their religious reading. One of the pleasures of finishing the book has been the opportunity to write short, accessible introductions to its arguments for newspapers and online venues for general audiences, and I treasure the letters and emails from lay readers like the ones I wrote about that have resulted from doing so.

I am a scholar of American popular books. Although many of these books are religious books, I am returning to work I did for my first book, Hard-Boiled: Working-Class Readers and Pulp Magazines, to think about Cold-War crime and espionage fiction and the ways readers of pulp paperbacks engaged with it.

Erin A. Smith is Associate Professor of American Studies at UT-Dallas. Smith is a scholar of American popular literature and a historian of print culture. Her larger intellectual project is to write a more representative American literary history, situating more conventionally literary works in a larger cultural field of books and readers.