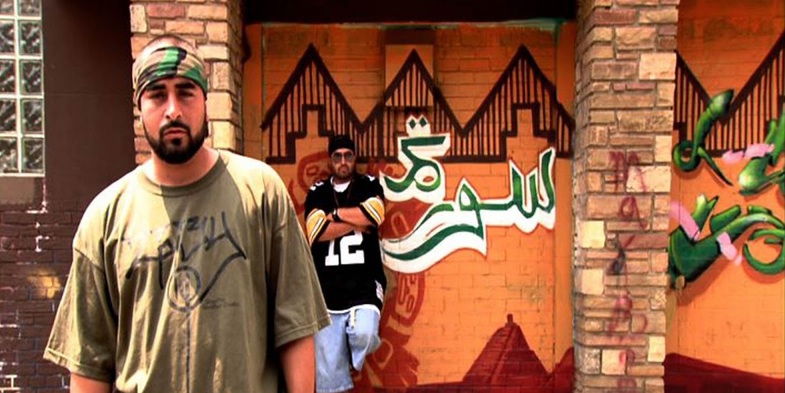 When I taught the course, World Religions in America, there was one documentary that I always included semester after semester: New Muslim Cool (2009). Filmmaker Jennifer Maytorena Taylor notes that the film “came out of my long-standing interest in the power of pop music and culture to create social change.” So, she follows rapper Jason “Hamza” Pérez as he negotiates life as a Latino Muslim in post-9/11 America. One of the things that I like about the film is how it introduced my students to the presence and growing population of Latinx Muslims in the United States. Many of my mostly white students were surprised that Muslims could be African-American and/or Latinx rather than Arab. Further, they tended to be unfamiliar with the founding of the Nation of Islam in 1930 or how Puerto Ricans joined the movement in its earliest days.

Since Latinx people are now the one of “the fastest growing segments of the Muslim community” and 6% of America’s Muslims are Latinx, I wanted my students to know that Muslims are more diverse than the common stereotypes suggest. Those stereotypes are dangerous for Muslims living in America, especially with the conflation of Muslim with terrorism. New Muslim Cool makes this unflinchingly clear. The viewer follows Hamza’s life as a Muslim, rapper, father, husband, brother, and son as well as the difficulties he faces because of his religious faith.

It is really hard not to like Hamza. He’s soft-spoken, direct, and determined to live his faith in ways that help others. Early on he tells viewers he had two dreams his whole life. First, he would die at 21, and second, he would be in jail. With a smile, he explains, “Then, both came true.” But, they didn’t come true quite like he imagined. At 21, Hamza converted to Islam, which was “the death” of all of his past indiscretions (like “smokin’ weed on the streets”) and an “awakening” to new pious life. He ends up in prison, but as a drug and gang violence prevention counselor and spiritual advisor/educator for Muslim and Christian inmates.

His conversion, however, doesn’t sit well with his Puerto Rican Catholic family. His aunt expresses shock and his uncle calls it “weird.” His mother, Gladys, admits that she was unsure how to handle his new Muslim faith–after all, she paid for Hamza and his brother, Suliman, to attend expensive Catholic School. Their conversion proves confusing to the family, but they still try to accept the choices Hamza and Suliman make. Throughout the film, Gladys struggles to understand Islam. She asks questions. She fears she’ll do something wrong. She attempts to learn because she loves her sons so much. That love and frustration is apparent in all of her interviews. If only Gladys could make sense of how Jason, her troublemaking son raised in the Catholic Church, became Hamza, a Muslim man who abstains from alcohol and drugs and prays five times a day, she might be able to rest easier. I’m not sure she ever does, but she keeps trying.

What makes this particularly hard for her is Hamza and Suliman’s rap music. “The words [of the music] are tough,” Gladys notes.

In a radio interview, Imam Talib, the “Hip Hop” Imam, notes that the name of their duo, Mujahideen Team, is a “very strong name for the post-9/11 world.” Mujahideen is the plural of “mujahid” meaning one engaged in jihad, struggle. Suliman emphasizes that they use jihad to mean the struggle against “lower desires.” Talib doesn’t look entirely convinced, but continues with the interview.

Talib notes: “You’re Muslim. You’re American. You’re Puerto Rican. You’re from the hood. You’re an artist. You’re a rapper…You sound like America’s worst nightmare.” This is the line that sticks with me after each time I’ve rewatched New Muslim Cool. Hamza appears as a threat because of his ethnicity, religion, and music. The threat that he comes to convey means that he is threatened, surveilled, and discriminated against.

Hamza and Suliman seem to know how America views them. When they perform on stage, they carry fiery machetes and they don’t pull any punches in their songs. In one song, they rap, “We don’t care about the Patriot Act,” and in another, they state, “bin Laden didn’t blow up the projects–it was you.” At the end of one song, Hamza leans into the microphone and says, “That was for the FBI.” Their audience cheers, claps, and nods in agreement.

Rap, however, is not only political commentary but also another form of outreach for Hamza, who’s trying hard to “rectify” some of the things he did on the streets. He gives out CDs to Latinx teens. He tries to convert drug dealers in his neighborhood to Islam. Becoming Muslim helped him turn his life around, and now he wants to return the favor. As the documentary progresses, Hamza falls in love with Rafiah, an African-American Muslim woman, and marries her. He learns to put his family first. He’s working hard for redemption for the life he left behind.

And then, the FBI raids the Northside mosque during the hours of prayer on a Friday. Their reasons appear specious. The FBI agents, in riot gear, break down doors and threaten arrests. They force members of the mosque to stand against a wall. As Hamza recounts the events of the raid, you can tell he’s trying to stay calm, but his anger is close to the surface. Local “drug dealers” already told him about the cameras the FBI installed near the mosque. Surveillance seems almost expected. The raid, he notes solemnly, wakes him up “to the reality of being Muslim in America.” The erosion of civil rights for Muslims appears right there on the screen in front of the viewer. New Muslim Cool asks us not to look away.

Six months after the raid, Hamza is teaching courses on faith in the county jail, and he’s remarkably good at it. He has rapport with the prisoners; talks forgiveness, mercy, the brotherhood of humanity; and what it feels like to reap what you sow. The prisoners like him and nod along with his message. The Mujahideen Team starts making another album with a song, “Welcome Home,” which feels like it is inspired by Hamza’s work in the jail. Life seems to have returned to normal after the raid, but one year later the jail revokes his clearance, which we later learn was at the request of the FBI. Two imams also lost their clearance at the same time. There’s no real reason given for Hamza’s dismissal. His supervisor notes, “Under the Patriot Act…my understanding is that reasons don’t have to be given.”

This is the point in the film where I liked to watch my students’ reactions. We’ve spent more than half of the documentary with Hamza. They might not like him, but he’s familiar to them. He’s a person, and they’ve watched his life unfold. Sometimes, they are rooting for him. Things seemed to be turning around, but suddenly, Hamza lost his position at the jail likely because he is Muslim. I surveyed the classes each semester to see how my students would react. Some of my students looked shocked, angry, and confused. Occasionally, someone would audibly gripe, “That’s not fair,” and other students would nod in agreement.

Every semester without fail, a visibly upset student would ask, “How can this happen in America?” I would pause and reply, “Discrimination like this happens all the time.” I would not say what I always wanted to: “How could it not?” Islamophobia has become commonplace in the U.S. News outlets report on attacks on Muslims and on people who are mistaken for Muslims like Sikhs. Mosques are vandalized. My students were often just waking up to the reality of what it is like to be a Muslim in the U.S. As Hamza might point out, the U.S. is reaping what fear has sown.

Semester after semester, I returned to New Muslim Cool because it manages something I couldn’t quite convey through lectures, PowerPoint slides, and assigned readings. The film provides the visual evidence of the prejudice, discrimination, and Islamophobia that Hamza and Suliman faced. It encouraged my students to have empathy and compassion for a person and a community that they didn’t even know existed. Islamophobia and its consequences appear real rather than rhetorical. Hamza struggles to find his place in a world that fears him. My students could see again and again the power of fear mongering and political maneuvering to harm the lives of those unfortunate enough to be targets. They did nothing but exist, but their existence becomes politicized and demonized. I showed them something they needed to see to believe. Islamophobia emerged not as a general problem, but one that harmed lives. It’s not going away without getting people, like my students, to notice.

Despite the focus on discrimination and prejudice, the documentary ends on a brighter note. The jail reinstates Hamza’s clearance. The camera follows him as he walks up to the front doors of a place he’s welcome in again. His excitement is telegraphed in each step forward. In the next scene, the viewer sees Hamza and Rafiah’s family and their new baby. Redemption feels closer now than any other moment in film. Things worked out. Or at least, they did temporarily. That’s cause enough for hope. Welcome home.

Kelly J. Baker is a freelance writer with a Religious Studies PhD who covers higher education, gender, labor, motherhood, American religions, and popular culture. She is the author of Gospel According to the Klan: The KKK’s Appeal to Protestant America (2011) and The Zombies are Coming! (2013). She can be followed @kelly_j_baker.