In our interview series, “Seven Questions,” we ask some very smart people about what inspires them and how their latest work enhances our understanding of the sacred in cultural life. For this segment, we solicited responses from Elizabeth Drescher, author of Choosing Our Religion: The Spiritual Lives of America’s Nones (Oxford University Press, 2016)

The seeds of Choosing Our Religion: The Spiritual Lives of America’s Nones (Oxford University Press, 2016) were planted early in my academic career as I studied 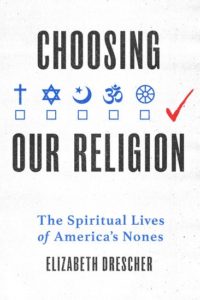 the spiritual lives of ordinary Christians in late medieval England for my dissertation and in my teaching with seminary students and undergraduates. In both cases, it was clear that what constitutes “religion” and the “spiritual” for most people often has little in common with what scholars study and demographers track.

As it happened, in the early 2000s, at the peak of the “New Age” and “spiritual-but-not-religious” phenomena and at about the same time Pew and other demographers began showing marked declines in institutional religious affiliation, I was studying a profound shift in religion in the Middle Ages—one that moved from Latinate, systematic theological and liturgical structures under the control of religious elites to the more affective, vernacular spiritualities that proliferated among ordinary people in the 14th and 15th centuries in Europe. And, my students—even those preparing for institutional religious leadership roles—seldom talked about their own spiritual lives as grounded primarily or extensively in formal church-based practices. Certainly this was the case for undergraduates. My own experience and observation as well argued for a much broader understanding of “the spiritual life” as something that develops well beyond the confines of religious teachings and formalized practices.

I knew that this was not simply a matter of increasing secularization in the sense of religion and spirituality being evacuated from American life. “Secular” is, after all, a religious word. It’s not life without religion, but rather religion or the spiritual as these play out “in the world,” in the here and now. Medieval monks and nuns, that is, served (theoretically, at least) by turning away from the world and focusing on the hereafter. The so-called “secular clergy” served in the world, and the vernacularized spiritualities of the centuries just before the Reformation amplified that “secular religiosity” in everyday life, changing what “religion” was and what it did in the lives of ordinary people. Outside of the geopolitics of emerging early modern nation states, that shift laid the groundwork for profound religious change. I could see a similar shift in the so-called “Rise of the Nones,” and I wanted to explore, at the level of the lived experience of ordinary people, how that was transforming American religion, both for the unaffiliated and the affiliated.

Mostly, I didn’t. My approach to the book was primarily ethnographic. I did some early focus groups and surveys to get a sense of what a broad cross-section of religiously affiliated and unaffiliated deemed spiritually “significant” or “meaningful” practices. Then I drew from the survey population to interview more than 100 people across the United States in-depth about their own spiritual lives. In that context, I invited people to define “religion” and “spirituality” themselves rather than pressing a definition on their descriptions.

On the one hand, the people I interviewed pretty consistently saw “religion” as an institutional phenomenon associated with propositional beliefs (usually theistic) and formalized rituals, both largely controlled by authoritative institutional leaders. “Spirituality” they took as fluid, malleable, provisional practices more or less unburdened by theology or ideology that are available to those outside such structures. On the other, the regular appropriation and creative adaptation of religious activities, language, and artifacts by Nones showed that even Nones’ somewhat formal understandings of “religion” were less fixed than they were prepared to acknowledge.

Interestingly, the term “sacred” itself rarely came up in the interviews, and I attempted not to introduce it into our conversations. But both the surveys and the interviews I conducted for the book revealed patterns among the practices Nones saw as set apart or otherwise special in terms that they would describe as “spiritually significant.” These mostly had to do with valued personal relationships—relationships with family, friends, and pets or other animals. Practices related to developing and deepening relationships took on the aura of the sacred to most of the people who talked with me. One key practice—preparing and sharing food—likewise nurtured relationships, as did prayer, the only more traditional religious or spiritual practice that was regularly mentioned by Nones as important in their spiritual lives. Once in a while a person would reference a “sacred” object or, especially among Atheists, a “sacred” belief or value (rationality, generally). But relationships were the ground of both spiritual and ethical practice for Nones who shared their stories with me. This pressed strongly against the popular idea of the unaffiliated as spiritually shallow, self referential, do-it-yourself religionists along the lines of the much maligned “Sheila” of Habits of the Heart fame, who described her idiosyncratic spirituality as “Sheilaism.”

First, I hope readers will see that there is a remarkable diversity in what constitutes “religion” and “spirituality” in America, among both the religiously affiliated and the unaffiliated. In particular, at a time when very narrow, rigid understandings of “American religion” in the political and popular realms are threatening to American democracy itself, I hope the book opens readers to valuing a much more diverse and dynamic religious landscape as a profoundly positive feature of the cultural character of the nation.

Second, I think the proliferation and popularity of demographic studies of religious and spiritual life, however helpful they have been otherwise, have narrowed our sense of what religion is and does for real people in the context of spiritually and morally complicated and complex lives. I think it’s incredibly important that we move beyond narrow, typically binary categories—affiliated/unaffiliated, religion/spirituality, religious/secular—so that we (and I mean this “we” as scholarly, ecclesiological, journalistic, and popular) have a better sense of how real people approach “experiences of fullness,” to borrow Charles Taylor’s terminology, questions of meaning and value, or practices and experiences of self-transcendence. I challenge readers to consider religion and spirituality as significantly, if not largely, “beyond belief” in that people very often experience the spiritual or religious in felt, sensate registers rather than as theological or philosophical concepts.

Third, any book is necessarily limited in scope. Though I surveyed and talked with lots and lots of people, they hardly cover the waterfront in terms of the diversity of Americans and their spiritual lives. There is much more to be learned, for instance, about how the economic realities confronted by lower-income Americans shape religion and spirituality today. Unaffiliated spirituality across ethnic and racial groups also merits much greater study. I know that some scholars of religion are taking up such studies, and I would hope to see more such work. I would also hope that the book prompts religious leaders and practitioners to consider how these contexts intersect and conflict with their conceptions of “religious” and “spiritual life.”

I had the remarkable privilege of working on much of Choosing Our Religion while I was a fellow on the Social Science Research Council’s “New Directions in the Study of Prayer” project. This allowed me to find a robust coterie of conversation partners who honed my work on prayer in particular. It also allowed me the distinct honor of sitting in the same room with folks like Robert Orsi, Courtney Bender, and Fenella Cannell, whose various approaches to the study of “lived religion” have long inspired me. The work of all of these scholars has done much to broaden the scope of how many of us conceptualize “religion,” “spirituality,” and “the secular.” I tried to integrate my own understanding of these ideas and methodologies in the book. Likewise, Boston University sociologist Nancy Ammerman’s rigorous and illuminating work on lived spirituality within religious communities has taught me much over the years that helped me considerably in writing the book.

Really, the current U.S. religious environment is so remarkably dynamic that, given endless time and other resources, a 10-volume project would hardly begin to map it. As I discuss in the book, I had initially planned not to include Atheists and hard Agnostics in the study, but early on determined that what many of them claimed as “spiritual lives” mattered greatly in understanding American religion and spirituality today. So I expanded the scope. I could have done so, as noted above, to explore the spiritual lives of people with less education and income than most of the people in my survey and interview population. I tried to move beyond the commonly-held stereotypes of Nones as West Coast “woo-woo” spiritually nutters or East Coast latte-swilling hipsters by expanding geographically to speak with Nones in all nine U.S. census regions. I broadened age representation considerably and brought in the voices of LGBTQ Nones. My hope is that others will carry out further studies of the spiritual lives of those not included in Choosing Our Religion.

Atheists, Humanists, and Secularists and Agnostics have sometimes challenged the idea that those among their ranks can be “spiritual” or, perhaps most provocatively, that they can “pray.” Among nontheists who are more committed to a secularism defined as the erasure of all evidence of religion, the idea that traditional religious language and practices might be appealing is deeply problematic. I get some push-back on that. Beyond that, the response to the book among academic colleagues and from those in religious organizations has been gratifyingly positive. I think religious leaders and practitioners are paying much more respectful, much less demeaning and dismissive, attention to Nones than was the case a few years ago, and I hear often from those in religious communities that the book is helping to facilitate meaningful dialogue.

I have a number of projects going on at the moment, these mostly related to the work I’ve done in Choosing Our Religion. At Santa Clara, we’re exploring, in collaboration with Religious News Service, how we can more meaningfully teach religious studies to our increasingly religiously unaffiliated undergraduates with the support of the Wabash Center for Teaching in Theology and Religion and a Hackworth Grant from the Markkula Center for Applied Ethics. That project will likely contribute to an undergraduate textbook for the study of living religions in local communities. Beyond that, I have begun research for a book on “cosmopolitan Christianities” that was inspired by what I took as a challenge to religious communities expressed by Nones who highlighted outward looking, other-oriented, “Good Samaritan ethics” over inward-focused, communitarian, “Golden Rule ethics.”

Elizabeth Drescher, PhD is Adjunct Associate Professor of Religion & Pastoral Ministry at Santa Clara University and Consulting Scholar at The BTS Center, where she co-edits the award-winning Bearings blog. Her research and writing focuses on religion and spirituality in everyday life. She is the author most recently of Choosing Our Religion: The Spiritual Lives of American Nones (Oxford University Press, 2016).