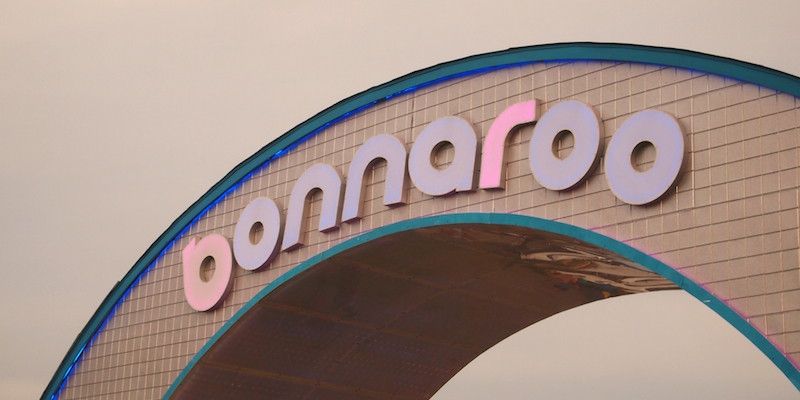 Bill Parsons’ recent post probed the patterns surrounding “the spiritual but not religious movement (SBNRM)” and pondered the oft-raised questions of spiritual narcissism and (a lack of) community, asking “is there a there there?” In other words, what social forms shape the ephemeral, individualistic phenomenon of “spirituality?” In response, I draw on observations and 609 surveys collected at the 2015 and 2016 editions of the Bonnaroo Music & Arts Festival to demonstrate how the festival serves as a kind of seeker-sensitive megachurch for the SBNRM and the psychedelic sub-tradition.

Like Coachella, Bonnaroo is a major gateway to the vast network of camping music festivals known as “The Scene”—36% of my sample reported that this was only the first or second music festival they had ever attended. In two previous Sacred Matters posts, I traced how Bonnaroo emerged out of the psychedelic subculture developed by the Grateful Dead and successfully adapted its multi-day camping festival medium to a broader audience using corporate sponsorship and a diversified lineup spanning the entire spectrum of contemporary popular music. While Bonnaroo’s audience is still disproportionately white and $325+ entrance fees restrict the audience to those with a significant degree of privilege, the increasingly eclectic lineup has clearly drawn a more diverse crowd—in terms of ethnicity, race, gender, and cultural tastes—than any of the other dozen camping festivals I have sampled. Age is the exception; the vast majority of the audience is under 25.[1] Bonnaroo serves more as a mainstream rite of passage for adolescents than an annual reunion for veteran “heads,” making it an ideal space to study how music festivals and the psychedelic tradition they embody continue to shape Millennials and the SBNRM.

Like those surveyed at the Grateful Dead’s final performance and jam band festivals throughout the country, Bonnaroovians overwhelmingly endorse the notion that the festival is a sacred collective experience. 76% of respondents affirm that “there is a shared spiritual culture, connection or energy permeating this scene.” Many invoke mystical language to describe the sensation of being absorbed into a collective mass of thousands of ecstatic dancers moving in tandem to the music: “The common enjoyment of a musical performance can create a feeling of oneness with others [like those] experienced through meditation/spiritual practices.” Bonnaroo thus offers a particular kind of collective religious experience that reflects, demands and reinforces the values that characterize the SBNRM and this generation—openness to experience, radical subjectivity, and mosaic identity construction through selective appropriation of diverse cultural resources.[2]

These Millennials’ openness manifests not only through their eclectic musical tastes and widespread drug experimentation, but also in the remarkable degree of unity achieved among so large and diverse a crowd through a shared commitment to “radiate positivity.” “We all feed off of that positive energy” wrote one respondent. “Every person here genuinely wants those around them, strangers though they may be, to have a good time and a positive experience.” One first time attendee reported being “STUNNED by the sense of community and generosity and taking care of others here.” Many respondents report that they feel an affinity with “like-minded” attendees and that their experiences in the Scene have made them “more accepting, open and empathetic” to others and motivated them “to show everyone they’re good the way they are.”

Of course, there are limits to such tolerance, particularly concerning those perceived as intolerant. Artists, including Pearl Jam’s Eddie Vedder, occasionally use the stage to preach against the narrowness of religious and political conservatives. In the immediate wake of the Orlando massacre, Grateful Dead legend Bob Weir closed the festival with condolences to the gay community and denunciations of Texan Lt. Governor Dan Patrick’s and Georgian U.S. Representative Rick Allen’s anti-gay remarks: “Is there a difference between [their] mindset and the mindset of the folks in the Taliban or ISIS? The hatred and intolerance is the same. They may pull it out of different books, but it’s the same thing.” In both cases, the crowd roared in accord.

Indeed, many testify that their experiences in the Scene pushed them away from “religion” and toward “spirituality.” While 85% report being raised in some kind of religious tradition, over half say that they are now either “opposed to” or “indifferent to” it, with only 10% identifying “wholeheartedly.” 61% report that they think of themselves as a “spiritual person,” but only 21% identify as religious people. Not only do respondents report that festivals introduce “new things that can halt religious practices,” but some argue that the unity achieved through live music “helps to show that everyone is connected without the need for an ‘absolute’ truth or supreme ‘answer.’”

Instead, Bonnaroovians freely appropriate whatever truths they find in a wide variety of religious, alternative and secular resources to construct mosaic identities. Respondents often struggle to characterize their particular personal blend. When asked open-endedly “which religious tradition do you currently identify with, if any,” 31% responded “none,” and another 9% “agnostic” but subsequent responses typically testify to selective appropriation of a variety of practices and beliefs rather than alienation or indifference. Others are more precise, taking advantage of the opportunity to frame their commitments in their own terms. A total of 17% identified with alternative forms not represented on traditional surveys, citing blends of natural, scientific, “Eastern,” “indigenous,” artistic, pop culture, and “new age” sources of inspiration. Even the minority who did identify with a single religious tradition [“Christian (26%),” “Catholic” (8%), “Jewish” (2%), “Buddhist” (1%), other (<1% total] were more likely to indicate similar patterns of free appropriation than “orthodox” forms of practice and belief affirming traditional authorities and boundaries. While critics lament the unreflective appropriation of other cultures and/or theological inconsistency of these “mash-ups,” respondents contested that they are more authentic, powerful and integrated with their daily lives than traditional forms of religion.

But how are such eclectic individual cults sustained? When asked open-endedly to report any regular spiritual practices, half of respondents indicate that they have none, and 65% report that they “never” or “rarely” attend “religious or spiritual services/gatherings.” For many of these respondents, music festivals like Bonnaroo may be their most common site for engaging the sacred, leaving them vulnerable to the narcissism and hedonism that may accompany this radically subjective approach to the sacred. While denunciations of the acquisitiveness of consumer culture are common, these Millennials can be just as spendthrift regarding experiences as their suburbanite parents concerning possessions. And like a baby boomer’s BMW, a weekend at Bonnaroo (enhanced by a substantial budget for mind-altering substances) may be as much about acquiring cultural capital as the thrill of the ride itself. The psychedelic tradition insists that this distinction between voracity for experiences versus things is utterly crucial and morally significant, but it must be tempered or it will descend into alienating addiction. Thus, the question becomes whether these peak experiences help people connect with their mundane lives and communities in a richer, deeper, more generous way, or simply offer an ephemeral reprieve that stokes the appetite to escape.

Many in the Scene argue that the commodification of the festival has “diluted” its communal spirit and liberating power. When asked about this “shared spiritual connection,” several responded “not this festival.” Just as “organized religion” is widely perceived as inauthentic and limiting within The Scene, “big corporations [i.e. LiveNation] do not equal spirituality.” When compared to samples gathered at other festivals, Bonnaroovians are somewhat less likely to frame the sacredness of the festival in personal terms. 59% of respondents affirm that “there has been a spiritual quality” to their experiences at festivals (compared to average of 75% for other festivals), but these affirmations are more measured and hesitant. 56% acknowledge that the Scene has “influenced [their] religious/spiritual identity” (compared to 65%), but only 10% describe that influence as strong (compared to 19%). These results suggest that while Bonnaroo provides an impactful experience of collective effervescence for many attendees, the connection individuals feel is somewhat muted compared to grassroots festivals catering to a more coherent and committed subculture. And this year’s disappointing ticket sales raise questions as to whether LiveNation can sustain the festival’s success and fuel critiques that the festival market that has exploded over the past 15 years may have peaked due to oversaturation and a resulting decline in festival distinctiveness and musical quality.

On the other hand, respondents frequently report how their experiences at the festival empowered them to “live in gratitude and positivity,” to accept and embrace themselves and others, “to see the good in everyone and to pass that good along.” Several testified to the power of festivals like Bonnaroo to save them from crippling cynicism: “It helped restore my positive faith in humanity. Before my first ‘Roo, I had no hope for this world. Hopefully now we can progress.” Respondents often frame such conversions in terms of spirituality, making claims like Bonnaroo “made me a spiritual person,” “makes me have hope, while I’m figuring out what I believe,” or even that “this is a place I need to be to reach my full spiritual potential.” While it is impossible to measure the long-term impact of these experiences with precision, the positive effects may be most enduring for those who are encouraged by the festival experience to establish more sustainable rhythms for finding meaning and connection. Some respondents report that their festival experiences “inspire[d] me to incorporate more practice into my life (yoga and meditation being the two most commonly “discovered” at such festivals’ “healing arts” stages),” “influence[d] my belief in energy among people and its importance,” or “reinforce[d] my desire to be in a corporate setting with spiritual people.” Bonnaroo may be a community in only the most ephemeral sense, and the sense of unity achieved through this hedonistic celebration may be fleeting. But such testimonials suggest that despite excesses and shortcomings, the palpable collective effervescence experienced there brings light to many young lives in these dark times.

Scott Muir is a doctoral candidate studying American Religion at Duke University who writes on religion and live music, and religion in higher education. Muir has written several pieces for Sacred Matters on live music and the sacred. He has another article on Bonnaroo and the psychedelic tradition and an earlier article on Deadheads

[1] My sample average was 23.5, despite outliers and excluding a number of respondents under 18. This average is significantly lower than the average for my other samples, 29.4.

[2] See paragraphs 5 and 6 of previous post for more on how the environment and shared musical experience reinforce these values.