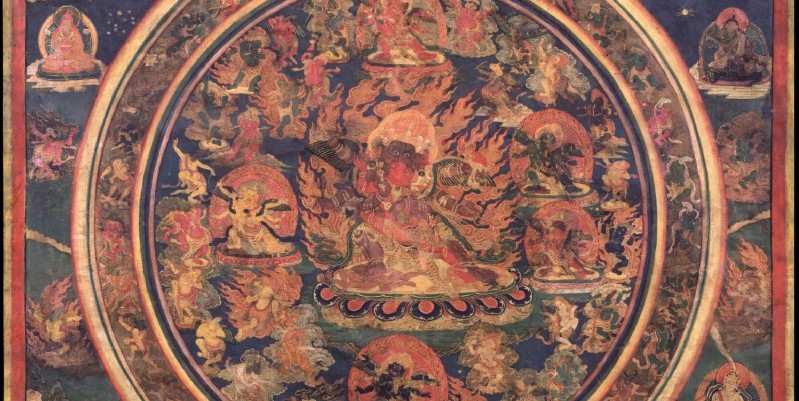 According to Tibetan tradition, when we die we enter into the bardo, a liminal realm between death and rebirth. For the forty-nine days after our body returns to the elements from whence it arose—earth, air, water, fire, and space—our consciousness migrates from this lifetime toward another reincarnation. Those who have not died—family, friends, religious attendants—help the dead through this in-between space. For seven weeks, ritual moments mark time, lending shape, sound, even color to grief. People light butter lamps, offer spoken prayers, and focus the heart-mind on the one who has passed. This period is a time to be gentle with the dead, to honor them, to cultivate compassion, and to abide in the understanding that what we share most, in this utmost stillness of cessation, is our humanity. Indeed, to be born human, according to Buddhist tradition, is a profound gift.

To die humanely and with grace is another matter.

Recently, people who have touched me deeply have departed from this life: my paternal grandmother and two luminous writers, Peter Matthiessen and Gabriel Garcia Marquez. Matthiessen’s vision was also that of a Zen priest and naturalist. Marquez, the father of magical realism, has been described as an “alchemist” of prose. As part of my meditations as they move through the bardo, I consider what they shared and what they taught me. Though they were very different people, they each had keen intellects and progressive commitments. They had much in common generationally: Matthiessen passed at eighty-six; Marquez was eighty-seven; my grandmother was just shy of ninety-four.

Born and raised in southern California, my grandmother cherished music, politics, and the outdoors. My grandfather, a Disney animator and Texas import, was the quiet one. “Gammy,” as we called her, loved to engage. She was also a woman of faith, raising her three sons in the tradition of Christian Science. At crucial junctures in my childhood, too, she cared for me. Although I never really understood the intricacies of her religious orientation, she was the one who first taught me to pray. And with that act—closing one’s eyes, breathing deeply, conjuring selflessness, setting an intention—she, as much as anyone else, introduced me to a sense of practice. To be clear: by “practice” I mean more than a vague sense of being “spiritual but not religious,” as many of us might say and as may also be true. Practice is a place of embodied experience. As Matthiessen has written, it is about “keeping my center of gravity deep in the belly, and letting that center ‘see.’”

Although I only ever encountered Matthiessen a few times in person, his lifework remains a touchstone. The first sighting was when I was a child, perhaps ten. I was old enough to be conscious of the books my father read and the ideas he valued, but still young enough that his books were talismans more than concrete pathways into knowledge or inspiration. My father and I had wandered into a seaside restaurant in Santa Barbara, California, and there was Matthiessen: a starkly handsome, sinuous man hunched over a simple breakfast and his notebooks. My dad whispered to me, “That’s Peter Matthiessen.” As my dad introduced himself and offered a few words of praise to Matthiessen, I felt him emanate awe—a quiet, uncomplicated reverence for someone he so fully admired. It was a remarkable moment, not unlike a birth.

I next encountered Matthiessen when he came to speak at Brown, where I was an undergraduate. My father had given me his book, The Snow Leopard, as I headed off to Nepal, twenty years after Matthiessen’s trip, in my twentieth year. Soon I found myself newly at home in the world, perched on a Tibetan rooftop in a region just east of Dolpo, reading his words: “In the longing that starts one on the path is a kind of homesickness, and some way, on this journey, I have started home. Homegoing is the purpose of my practice.”

These words resonate still, after yet another two decades of my own life and work, much of it spent in the high Himalaya, including in Dolpo. I also recall Matthiessen expressing—in that brief personal encounter and in so much of his writing—what I now often feel as an anthropologist and also simply as a person: Cultural transformations are at once glacial and lightning quick. Globalization and the increasing interconnectedness between our manufactured landscapes threaten Earth’s harsh, astounding cultural ecologies, demanding new forms of resilience and honest reckonings of loss. People can be astoundingly brutal to one another and also astoundingly kind. To observe carefully, to bear witness, is itself a form of practice.

Marquez’s genius also speaks to such forms of practice, bringing out through the revelations of the written word “a reality not of paper, but one that lives within us and determines each instant of our countless daily deaths, and that nourishes a source of insatiable creativity, full of sorrow and beauty,” as he described when he accepted the Nobel Prize for Literature in 1982. He was a practitioner of the world, at once delighted by its myths and troubled by its tragedies. In my efforts to write about the politics of Tibet, I find resonance in how Marquez learned to give voice to ethnic and political strife without ever bending to dogma.

I last saw my grandmother just after Christmas. It had been too long since I had seen her. Light streamed in to the common room of her assisted living facility, illuminating her as we held hands, speaking in memory fragments. When her breath became labored she would close her eyes, bespeak words of faith, of return, of being beyond herself. There was an intimate formality to it, not unlike sitting zazen. When she opened her eyes, those clear blue pools of time, it was the beauty of the flowers across the room she noticed. Not pain, not fear, just presence.

Sienna Craig  is associate professor of Anthropology at Dartmouth College, where she teaches courses on health and illness, global health, Asian medical systems, Tibet, and the Himalaya. She is a fellow of the OpEd Project and a contributor to Bodies in Balance: The Art of Tibetan Medicine, a new exhibit at the Rubin Museum of Art in New York.