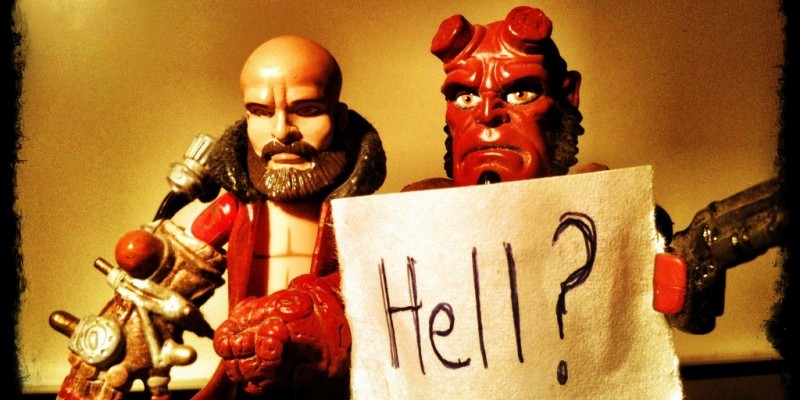 In the four issues of the Dark Horse Comics mini-series Hellboy: Seed of Destruction (1994), readers meet the titular demon Hellboy, who arrived in the world thanks to a Nazi “Doomsday” ritual led by Russian occult figure Grigori Rasputin. If this sounds familiar, you may have caught the popular 2004 movie adaptation directed by Guillermo Del Toro. Or you may recall the small but persistent interest connecting Hitler and occultism. As fodder for Hollywood blockbusters such as Indiana Jones, Hitler’s desire for religious objects such as the Ark of the Covenant has become an expression of the devotional elements of fanaticism. The fictional pursuit of supernatural power by the Third Reich often disguised legitimate fears of technological power during the Cold War era arms race. Likewise, the real Rasputin was a popular mystic in Imperial Russia who historians believe may have played a role in the February Revolution of 1917 that ended the Romanov dynasty. Even as a mere allusion, Rasputin’s presence legitimizes Hellboy’s pervasive gnostic mysticism. While powerful on their own, these messy combinations of fact and fiction are the perfect frame to support the fictional cosmology of noted cult horror author H.P. Lovecraft and his Cthulhu gods.

Lovecraft’s most famous work, the short story “The Call of Cthulhu,” spawned a devoted interest in the mythology of slumbering, titanic deities. Beings beyond human reckoning, the Cthulan pantheon claimed that the Earth was once ruled by monstrous deities. Now imprisoned in an alternate dimension, these gods are patiently waiting for their moment to reclaim the Earth. Humanity and all of its works will be destroyed.

After Lovecraft’s first stories, other authors took up their pens to compose more dedicated and codified versions of the Cthulhu mythos. Of late there has been a Lovecraft-ian revival, spawned initially by the collection and publication of Cthulhu mythology but evident most clearly in the popularity of the role-playing board game Arkham Horror. Fans of his work are able to immerse themselves in a universe where humans stand as gatekeepers, preventing the old gods from returning and ushering in the end of days. Fan participation in the expansion of fictional canons is part and parcel of contemporary literature and film. To be a true franchise today, one must embrace media of all stripes. It is no longer enough to simply let one’s story be. There must be an animated series, an adapted movie, a novel, a board game, and even, if you’re as lucky as Lovecraft’s work has been, a key element in new stories spiraling off into their own franchises.

Hellboy is also all of these things.  But it is foremost a comic that embraces the gothic as Lovecraft did in the interwar years in New England. The comic delights in paranormal abilities that connect to worlds beyond our own. It celebrates the prophetic as a link to authentic religious pasts long forgotten. It satisfies our desire to live in a demon-haunted world but feel protected by honorable, if flawed, guardians. It is the world our world might be if every conspirator’s theory about Nazi occultism, pervasive Satanism, and, especially, Lovecraft-ian mythology, were true.

One of the major pieces of Cthulhu lore that shines through Hellboy is the hubris of human devotion that invokes or calls forth the ancient gods. In the opening pages of the comic, Rasputin gives a monologue, worth quoting here at length, that establishes this danger and its cosmic implications:

These are Lovecraft’s gods as truly capricious deities. They are the embodiments of Rudolf Otto’s mysterium tremendum es fascinans—the mystery that both repels and attracts us. Rasputin’s motives become the substance of the narrative: his desire for control, his patience for the means to manipulate the circumstances to his benefit, and his dismissal of humanity in favor of the old gods. These are the centerpieces of Lovecraft’s cosmos, established in the very first words of “The Call of Cthulhu”:

The most merciful thing in the world, I think, is the inability of the human mind to correlate all its contents. We live on a placid island of ignorance in the midst of black seas of infinity, and it was not meant that we should voyage far.

To call it bleak would be an understatement. And of all things, it is Hellboy that this ritual calls into being.

Mike Mignola’s illustrations for the comic mirror this sense of isolation and the bleakness of the world Hellboy now protects. His panels are sparse. The colors are filled thickly and often monochromatically with privilege given to negative space. Black gutters keep the pages from distracting bright interruptions, even as Mignola often prefers to erase the divisions between cells and constantly reconfigure the panels. Figures are most often located in the centers of their cells, lost within larger spaces. The palette is cool and muted with a strong emphasis on dark blues and greens. Hellboy himself, while unmistakably bright red, is often presented with strong shadows, perhaps to help emphasize his enormous size while preventing his color from dominating any page.

Often these elements appear together, as in the panel below where Rasputin finally meets Hellboy.

Not only can we see Mignola’s choice to use strong shadows and highlights, as in the technique of chiaroscuro, but also his dynamic layouts. Here we see the upper two thirds of the page consist of a single panel. Rasputin is highlighted not only by his location, but also by the enlargement of the panels he is painted in. The convergence of diagonal lines in the center of the page and the diminished size of Hellboy’s depiction in the bottom tier of the page all help convey a sense of subordination and helplessness. Hellboy fills the panels he occupies, but his red skin is minimized by clothing, shadow, and even the angles from which he is drawn.

As a piece of sequential art, Hellboy also fully employs unscripted visual clues to convey narrative detail. Rasputin’s robe, for instance, features a pentagram and a dragon. The pentagram replaces a swastika that appeared on Rasputin’s robe in an earlier scene. Having survived the fall of the Nazi regime, Rasputin’s continued devotion to the ancient gods is now visually associated not with power to be harnessed for the Reich but rather for an unspecified occultism. The dragon itself is the mark of the old gods. Mignola is comfortable not only with negative space, but also a kind of symbolic negative space—unarticulated religious symbols that give the characters gnostic sensibilities. As readers, we are true observers. We are treated very nearly as simple bystanders to the struggle to usher in or prevent the end of days. Even if they fascinate us, we do not possess the secrets to unlock these mysteries.

In the end, Rasputin and Hellboy become counterpoints as they express humanity’s laudable and lamentable ideals. Rasputin is convinced he will have a place of power in the new age. Readers are encouraged to view this as a significant folly. How could anyone hope to harness that which the human mind is incapable of conceiving in its monstrosity? In Lovecraft’s work, knowledge of the ancient ones drives men to madness. Rasputin’s discontent with humanity’s ignorant, placid islands has only made him a pawn for awesome kinetic deities. He is the hand that sets the mousetrap and humanity, the mouse that will be caught in the trap. The gods are predators waiting to be released from their cages and the one who frees them is sure to be their first victim.

Despite his origins in Rasputin’s ritual invocation, Hellboy becomes convinced that humanity is worth protecting. He declines Rasputin’s offer to become allies and eschews the power he might have wielded. Does he know something Rasputin does not? His lack of will to power makes him more identifiable. It’s even what helps make him seem heroic. He is able and willing to act as humanity’s guardian. Sure, he’s impulsive and crass, but we know by his actions that his heart contains the kind of purity that elevates demons to superheroes.

In the 2004 movie adaptation, the leader of Hellboy’s Bureau of Paranormal Research and Defense says, “In the absence of light, darkness prevails. There are things that go bump in the night . . . And we are the ones who bump back.” So the sting of the affirmation of the monstrous and paranormal is offset. We should be thankful that Mignola has provided his world with such a protector. For his part, Lovecraft seemed as indifferent to humanity’s welfare as the gods he created. As a piece that extends portions of the Cthulhu mythos, Hellboy is the best kind of fan fiction. Bringing Lovecraft’s deities to the brink of our world, Rasputin says, “Hell is coming here.” Thank goodness for Hellboy.