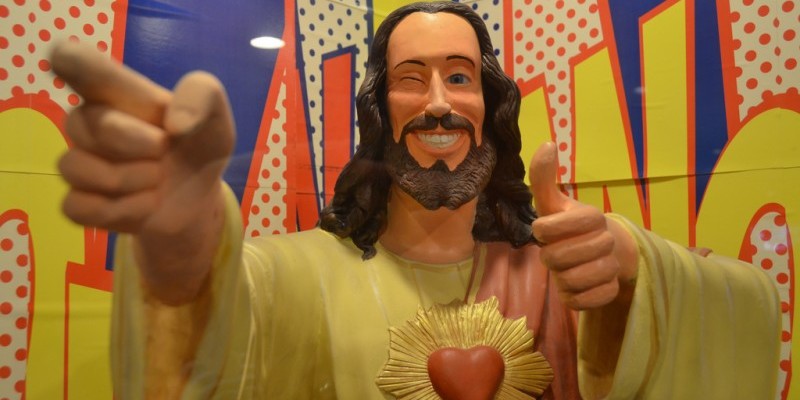 In the beginning was the Jesus film . . .

The birth of cinema dates from the Lumière brother’s first public screening for a paying audience in a Paris café in December 1895. The following decade saw at least a half-dozen filmed versions of the life and passion of Jesus Christ and a handful of Moses films. Some of these were even made by the inventors of cinema themselves, Thomas Edison and Louis Lumière. Soon after the birth of film, the “father” of Indian film, D. G. Phalke, was inspired by a film of the life of Christ and set out to project the pantheon of Hindu deities on screen, ultimately birthing the great Bollywood tradition.

Not to be outdone by the filmmakers, film theorists have consistently noted the ways in which cinema and religion are tied. In the first half of the twentieth century, the influential French critic André Bazin flatly quipped, “The cinema has always been interested in God.” Filmmaker and critic Jean Epstein went one step further, “I would even go so far as to say that the cinema is polytheistic and theogonic.” Not only do films put religion and the gods on screen, but cinema creates gods.

Decades after the invention of film, upon the death of the great American novelist John Updike, the writer Ian McEwan wrote a remembrance in the New York Review of Books, commenting on Updike’s love of film. In McEwan’s Updike-inspired terms, religion and cinema are “two grand designs, conjuring light out of darkness.”

There is something about the very medium of film that promotes production of the divine. With cinema, a powerful new spiritual force was unleashed, and its energy had to be subdued, tamed by existing religious authorities. Today’s spirited, and occasionally obnoxious, debates over religion on film have over a century’s worth of precursors.

Curiously, it was the very darkness of the theater that made some religious moralists nervous. The very fact that people might congregate in a dark space was cause for concern in and of itself. The 1989 Italian film Cinema Paradiso wonderfully displays the tragedy and ecstasy of the shared space of the early theaters, as the local priest initially censors sex and violence from the films, but eventually the immoral acts occur off screen in the theater space itself. Art and life are never so far apart, which makes the regulation of art such a concern for religious authorities seeking to promote a particular version of life.

It wasn’t just the darkness of the theater but the dark themes of film that threatened the wellbeing of upstanding citizens; out of such concerns arose a series of production codes that were meant to keep check on representations of sex and violence. By 1909 in Italy, a Roman Catholic–instigated review commission was set up to create the prototype of the first ratings system. By the 1930s, a US Catholic group, the Legion of Decency, arose to combat immorality in cinema. And the Motion Picture Production Code (aka the “Hays Code”) was implemented in the United States by 1930, staying in place until 1968.

Such censoring checks didn’t go far enough for some. In 1942, Dan Gilbert, Chairman of the Christian Newspaper Men’s Committee to Investigate the Motion Picture Industry, would state: “Hollywood is the nearest thing to ‘hell on earth’ which Satan has been able thus far to establish in this world. And the influence of Hollywood is undermining the Christian culture and civilization which our fathers built in this land.” For many, film and religion had irreconcilable differences; the lights in the darkness were not coming from the same source.

Various economic and moral issues were settled by the 1950s, and the great biblical epics arose, playing a crucial role in the evolution of Hollywood film style. Prominent were Cecil B. DeMille’s sword-and-sandal films such as the 1949 Samson and Delilah, featuring a scantily clad Hedy Lamarr. The sexual intrigue continued in David and Bathsheba (1951) and Solomon and Sheba (1959). Ultimately, DeMille’s The Ten Commandments (1956) would make Charlton Heston the (pre-Morgan Freeman) voice of religious movies, culminating in his Oscar-award-winning performance in William Wyler’s Ben Hur (1959). And 1960 alone would see the release of David and Goliath, The Story of Ruth, and Esther and the King. Every one of these great epics was filled with more extra-biblical material than Moses could shake his staff at.

During this time, Jesus films would take a back seat to the Old Testament stories. DeMille’s 1927 King of Kings set the early standard and such “biopics” would not be taken up again on a large scale until Nicolas Ray’s 1961 King of Kings and George Stevens’s 1965 The Greatest Story Ever Told. Ironically, the filmmaker who kept most strictly to the biblical text was the notorious atheist and communist Pier Paolo Passolini whose 1964 The Gospel According to St. Matthew remains a masterpiece of cinema.

The social upheaval of the 1960s and 1970s led to a range of approaches to religion on film; in retrospect we might note a culture weary with the seriousness of religious topics. The blue-eyed divinity of Jeffrey Hunter was transformed into entertainment and parody in Godspell and Jesus Christ Superstar (both in 1973) and the meta-spoof Monty Python’s Life of Brian (1979). All of which didn’t stop the revival of the blue-eyed, kitschy sincerity of Franco Zeffirelli’s television mini-series, Jesus of Nazareth, in 1977.

Ultimately, Martin Scorsese’s The Last Temptation of Christ in 1988 would push the boundaries of permissibility in Jesus films and evangelical groups moved en masse to protest. (So effective was the backlash that in 1991, upon moving to Atlanta, Georgia, I asked for the videotape at the local strip mall Blockbuster only to be told by the clerk, “Oh, no, we wouldn’t have that film here!”)

The protest against Scorsese’s film indicates a striking shift that occurred among the religious watch groups between the first part of the twentieth century and the final decades. The shift—the end result of which accounts for recent protests against Noah—was a move from concerns about morality to concerns about theology. Catholic leaders had exerted a strong cultural influence throughout much of the twentieth century; they were responsible for a good deal of censorship, but that was largely surrounding the moral issues of sexuality, and sometimes violence, as depicted on screen.

On the Protestant side, a particular brand of orthodoxy did not become a key concern until evangelicals began to politically mobilize in the last decades of the century. The earlier fundamentalist movement saw culture as corrupt and simply stayed away. Preachers like A. W. Tozer would sermonize in the 1940s about the “menace of the religious movie,” and basically told his flock to stay out of the theaters altogether.

Inspired by a new crop of evangelical leaders such as Francis Schaeffer, Tim LaHaye, Jerry Falwell, and James Dobson, the right-wing Protestant Christianity emerging in the later 1970s sought to engage culture, to challenge it when need be, and contribute to it as well. This entailed protesting what they saw as false images of true Christianity, but also producing their own movies. Among the more successful productions were The Jesus Film (1979), The Lion, the Witch, and the Wardrobe (2005), and the Visual Bible productions of The Gospel of Matthew (1993) and the Gospel of John (2004). There is also of course Mel Gibson’s The Passion of the Christ (2004) made by a conservative Catholic but fully embraced by evangelicals.

With the modern evangelical movement, rooted in the Protestant tradition, adherence to biblical authority became tantamount even when that entailed turning a blind eye to all the extra-biblical, Catholic dimensions of, say, Gibson’s Passion. There is always a moral concern, to be sure, but the real issue that motivates today’s evangelical groups is that of a perceived biblical orthodoxy, something neither the Catholics nor the mainline Protestants shared.

This, then, is the confused and conflicting inheritance of today’s see-saw responses to Son of God and Noah, the one an evangelical production and preaching to the choir, the other much more firmly in the 1950s tradition of big budget works that loosely followed biblical scripts. If anything has been consistent in the relations between religious interests and film, it has been that there is no consistency. The paradoxes of religion–film relations filter through the decades so that, on one hand, there is nothing new under the sun, but on the other we find unique configurations of bedfellows with each passing decade. Sex is out, except when it’s not. The Catholics are wrong, except when they’re not. The Bible is authoritative, except when some have the correctly marketed, excess material.

And so I sit on a Sunday morning, 120 years after the beginnings of cinema, and watch Dreamwork’s Prince of Egypt with my daughters, a film that would have made DeMille proud with its barely clothed, animated figures taking great liberties with the source material.

S. Brent Plate is visiting associate professor of Religious Studies at Hamilton College. He is the author of A History of Religion in 51/2 Objects: Bringing the Spiritual to Its Senses.