Indian Summers: Find Your Seat at the Table Edition 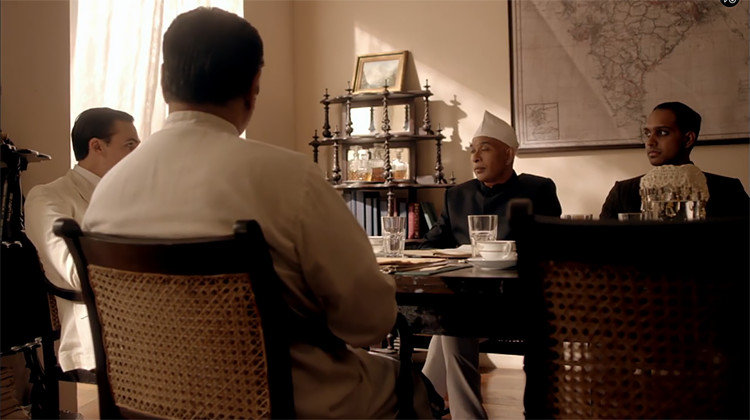 This is our third in a series of discussions about the PBS Masterpiece series Indian Summers, airing Sunday nights at 9 pm EST on PBS. Sacred Matters’ managing editor Michael J. Altman and Ilyse Morgenstein Fuerst, assistant professor of religion at the University of Vermont, will offer their reviews of the series as it airs in the United States. NOTE: THERE ARE SPOILERS.

Episodes 5 and 6 were quite different in their emphases. Episode five spent a great deal of time unpacking the broad social relations shaping life in Simla and the politics of India as a whole. Meanwhile, episode six dove deep into a few important relationships and turned the heat up on the love stories.

MJA: In 1858, Max Müller, a founding father of the European study of India, described the difference between caste in India and England. “There may seem to be an essential distinction between caste in India and caste in Europe, the one being invested with a sacred character and supposed to be unchangeable, the other being based merely on traditional prejudices and amenable to the pressure of public opinion,” he wrote. Episode five explores that essential distinction. The meeting between untouchable leader Dr. Kamble, representatives from the Congress Party, the Viceroy, and Ralph introduces the question of caste in terms of political representation. The Congress Party representative claims that “we are all Hindu,” and yet Dr. Kamble seems unconvinced. Through Dr. Kamble, the show’s writers also introduce the practical and everyday ways that caste shaped life in India during the period. Dr. Kamble can’t go into the temple. He gets the side-eye from the Brahmin civil servants. He won’t ride in a rickshaw.

But the episode also reflects Müller’s observation about Europeans. Sarah, the missionary’s wife, tries to blackmail Alice into getting her moved up the table for the engagement party. When Alice approaches Mr. Keane asking to have Sarah moved up he says “nothing can be done.” Seating at the dinner is given out “to each according to their place” and Sarah has her place down the table. And so these two caste systems collide at the engagement party as the untouchable Dr. Kamble and the missionary’s wife Sarah each try and sit with their social superiors. Surrounded by Brahmin civil servants and a Maharaja who will be polluted by eating with an untouchable, Dr. Kamble decides he’s lost his appetite when he is finally served. Sarah ends up dancing with the Viceroy. I wonder what Max Müller would make of that?

IMF: I saw Müller in this episode, too! Dr. Kamble, when trying to suss out Ralph’s real intentions, flatly asks if the Englishman’s kindnesses are part of a typical divide and conquer strategy. I only heard the echo of Müller’s gloss of “the old saying divide et impera” as “classify and understand.” The engagement party scenes certainly trade in classification, understandings, and perception: class, caste, place are all on display, as are the ways Ralph and Madeleine attempt to solidify their standing in this community at its paramount–complete with costumes.

To pull the thread you’ve picked up on a bit more, I think another place we might see Müller’s sense of caste in India and Europe is the relationship between Ramu Sood and Ian McLeod. Despite warnings of censure and exclusion, Ian decided to work for Ramu Sood; Ramu admits he only wants Ian’s English name; Ian spits back, angrily, that he’s Scottish; Ramu retorts that no one cares, it’s a name, and it’s a name that opens up mercantile possibility (over and above his own). Ian’s Scottishness comes up a fair bit in these episodes, as does his choice to work for a “native”–he’s portrayed as a race traitor even while he’s marked as decidedly not English. This relationship is one of the more interesting, with both men defying racialized (casted? classed?) expectations.

MJA: I’m curious, Ilyse, what you make of this show as television entertainment. While it’s been fun to unpack the historical period of the setting, what do you make of the plot itself?

For my part, I have to say I think episodes 5 and 6 finally paid off on a lot of the storylines that I was really uninterested in up to this point. The kiss between the mountaineer character did a great job of shaking things up and putting real pressure on Alice. The kiss between Aafrin and Alice was what we all knew was coming, even if it felt a little forced in that moment. But the big reveal that Adam is Ralph’s son and then the final scene of Jaya’s mysterious drowning have given this whole show an new energy. And we finally know what “Rakashas!” meant!

IMF: The history has been fun, but I have to say, I love TV. A lot. And these episodes finally felt like TV-drama instead of history-is-dramatic-drama. The writers seemed less concerned with introducing complex motifs to an audience and more interested in pushing character development in 5 & 6.

That inevitable Alice and Aafrin kiss was so forced and so implausible. The story line between them went from a suggestion of interest, a passing glance to an epic-worthy love in an episode! The way the kiss went down–its publicness, for one, but also its spontaneity–just felt all wrong. The big reveal was good television, but I’m not so sure Jaya’s drowning was terribly mysterious! Didn’t she say, wistfully, in her stolen wedding sari, “You came!” Wasn’t Ralph supposed to meet her? I think we’re left connecting dots, and our Ralph may turn out to be a bit of a rakasha, after all.

The relationship between Ian McLeod and Ramu Sood could be fascinating if they give it more screen time.

I really don’t know what to make of Sita’s character. Should we feel bad that Aafrin is falling for Alice?

Will Sarah keep blackmailing Alice? There has to be more to that right?

IMF: I’m absolutely with you on Ian and Ramu. I think that could be good TV and interesting history.

I do not like Sarah. She’s awful. I hope there’s more to her, but if not, I hope we her less. Are we supposed to loathe her so that the love between Leena and Dougie (her husband) is either palatable or desirable?

How cute are Aafrin’s parents? They flirt, they nudge, they bicker, they hug, they love and seem to want to do right by each of their kids. #lifegoals.

PrevPreviousGiving up the Ghost?: Being Human in the Age of Intelligent Machines (Part I)
NextAmerican Religion: Less is MoreNext