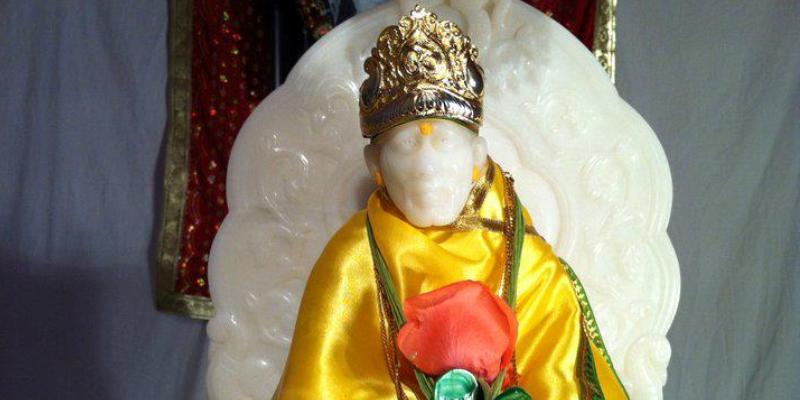 I.  The miracle in Mississauga

Last month, the face of Shirdi Sai Baba (d. 1918)—a holy man who lived about 150 years ago in the small village of Shirdi in what is today the state of Maharashtra in western India—appeared on the wall of Sai Dham Canada in Mississauga, Ontario.

According to the temple’s website, the miracle was discovered on April 12 as Sai Baba devotees were celebrating Ram Navami, one of the nineteenth-century saint’s favorite festivals. Since then, temple caretaker Vishal Khanna has posted videos on a YouTube channel to document the continued presence of the image, for example, on Day Eight and Day Twenty-Nine. The videos focus on an area of plaster with unusual contours and swirls where the face is said to have suddenly appeared. Word of Sai Baba’s miracle in the temple has spread quickly and Sai Dham Canada has been flooded with requests to see the image. “Anyone can actually come and take [Sai Baba’s] blessings,” says Khanna.

While one of Shirdi Sai Baba’s trademarks is his message of spiritual unity and peace among all religions and communities, he also has a reputation as a powerful, efficacious miracle-worker who offers real, tangible answers to prayers. There are numerous stories in hagiographic/devotional literature about Sai Baba curing incurable diseases, guaranteeing children to childless couples and pulling people out of danger in the nick of time. “My business is to give blessings,” says Sai Baba in B. V. Narasimhaswami’s Charters and Sayings, a compilation of the saint’s teachings and aphorisms first published in 1939. And the recent miracle in Mississauga is an indication that the saint’s blessing-giving business is quite robust today.

Sai Baba has had a vibrant presence in people’s lives even after his death in 1918—or rather, his entrance into mahāsamādhi, the merger of the saint’s soul with and into God. It is important to remember that saints in India never die, fully and finally, because they and their indefatigable spiritual power remain accessible well beyond the tomb. To that effect, Sai Baba gave a set of eleven assurances to his devotees before he died, the gist of which is that he promises to be posthumously active and vigorous in their lives.

For example, in the Indian city of Coimbatore in 1943, the sudden appearance of a cobra in a small hut where devotees were singing hymns to Sai Baba was interpreted as a manifestation of Sai Naga, that is, Sai Baba in the form of a snake. The cobra didn’t hurt anyone but rather seemed infatuated with the devotional atmosphere. Today, that small hut has transformed into a spacious Sai Baba temple with a full set of rituals and festival celebrations catering to a large community.

Could the Sai Dham temple in Mississauga, Ontario, follow a similar pattern of expansion in the decades ahead?

The iconography of Shirdi Sai Baba—not to be confused with Sathya Sai Baba, his purported reincarnation—often features close-up depictions of his bearded,  somewhat rough-looking yet kindhearted face. Although I am familiar with these images, I didn’t see them in the YouTube videos at first. As I watched the temple’s videos, there was a lot of head tilting and squinting on my part, as well as asking others, “Hey, take a look and tell me what you see.” But now I see it. When Khanna points out the eyes, nose, and beard in the TV report by Toronto’s City News, it becomes much more difficult to un-see what others have seen.

If you do see Sai Baba’s face on the Canadian “wonderwall” and you’re worried about what friends, family, and colleagues will think, there’s (kind of) good news!

Researchers at the University of Toronto say that it is “perfectly normal” to see the faces, including those of religious figures, in inanimate objects because the human brain is “uniquely wired” to do so. Their findings in the April 2014 issue of Cortex, a journal for the study of cognition, pertain to the phenomenon of “face pareidolia, the illusory perception of non-existent faces” where they do not exist—or rather, where they have not been purposely crafted by human hands.  Examples of face pareidolia include seeing the man in the moon, the Virgin Mary in a grilled cheese sandwich, and the smiles and frowns in a blog’s worth of objects.

According to the study, some people will see what they have been suggested to see. Twenty participants, aged eighteen to twenty-five, were shown “pure-noise images,” i.e. computerized pictures with no identifiable shapes (think static on TV). Some were told to expect to see faces in the images; others were told to expect to see letters of the English alphabet. More than a third of participants in each group reported seeing faces (34 percent of the time) or letters (38 percent of the time) in the indiscernibleness. In contrasting the perception of faces and letters in pure-noise images, the study argues that face pareidolia, as opposed to letter pareidolia, comes from a unique network of interactions between the frontal cortex, the brain’s generator of expectations, and the posterior visual cortex, its image processor. The study also suggests that instead of the conventional wisdom that “seeing is believing,” more than a third of us apparently live in a way where “believing is seeing.”

Lead researcher Dr. Kang Lee says that the demystification of face pareidolia will contribute to understanding how and why certain mental illnesses, like schizophrenia, induce strong hallucinatory experiences of people and things that aren’t there. Lee has also said that pareidolia is not deserving of ridicule:

Most people think you have to be mentally abnormal to see these types of images, so individuals reporting this phenomenon are often ridiculed . . . But our findings suggest that it’s common for people to see non-existent features because human brains are uniquely wired to recognize faces, so that even when there’s only a slight suggestion of facial features the brain automatically interprets it as a face.

If there were any doubt about how American popular culture responds to face pareidolia, one might take a look at the irreverent portrayal of Catholics who are hoodwinked into venerating the Virgin Mary in a water stain in the It’s Always Sunny in Philadelphia episode, “The Gang Exploits a Miracle.” On May 13, the Daily Show’s “Moment of Zen”—the pithy segment that concludes each episode with a wacky clip and quote from the day’s news— highlighted the Fox News Question of the Day, “Do you think it’s perfectly normal to see Jesus in a piece of toast?”

So, Toronto’s study is good news for religious folks who see the face of Jesus in a burnt fish stick (or a goldfish cracker) and Sai Baba on a plaster wall—it is not the result of brain anomalies or overactive imaginations but rather a natural and neurological process.

The bad news, however, is that the perception of such images is couched in language like “illusory” and “non-existent.” And this is where those who see the images and those who study the people who “see” the images will diverge in their interpretations of events.

On one hand, researchers explain how the brain closes the gap between absence and expectation with neurobehavioral science. Here, the faces of religious figures are only the products of brain chemistry. On the other hand, some who see the face on the Mississauga temple wall as Sai Baba’s miracle might agree that the image is the result of what they, unconsciously or consciously, want to see. Their image is also the self-manifested (swayambhū) instantiation of divine presence, the saint’s tangible response to his devotional community’s worshipful activities. One woman interviewed in the City News TV report said that the image is a “confirmation of our devotion,” that is, the return on what devotees have invested in him, emotionally and spiritually.

This is not to say that the discussion has to end with a dissatisfying resignation to this perspectival dichotomy. The Toronto study demonstrates the power of suggestion on the neurology of perception. “It depends on your personal experience and your personal expectations,” noted Lee. “So for example, if you are religious and you want to see Jesus, then you’re going to see Jesus. If you want to see Mary, you’re going to see Mary.” That onlookers will see what they want to see or what they hope to see is actually quite similar to Shirdi Sai Baba’s seventh assurance: “In whatever faith men worship me, even so do I render to them.” This is the saint’s version of the dictum that “believing is seeing”—and it predates the findings in Cortex by a century or so.

Jonathan Loar is a doctoral candidate in Emory University’s Graduate Division of Religion. He is currently writing his dissertation on Shirdi Sai Baba.