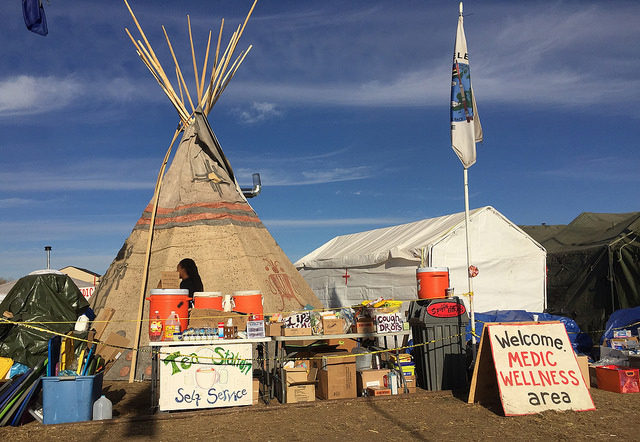 “This is a ceremonial camp. Act accordingly,” was first on a list of guidelines posted at Oceti Sakowin, the main camp at Standing Rock. Signs and loudspeaker announcements reminded water protectors that we were there in prayer, not in protest. Each communal meal, meeting, and action opened and closed with prayer, during which all present were asked to participate by removing hats and hoods. There were guidelines for appropriate behavior around the spirit fires at the center of each camp, restrictions on approaching the sacred rivers and hills, and prohibitions against overuse of sacred firewood and alteration of the sacred lands.

The camps’ foundation upon Lakota spirituality required non-indigenous guests to figure out how to participate in native religious life without appropriation or domination. As non-natives, we were asked to conform ourselves to being “in a constant state of Prayer and Ceremony,” but also—especially if we were white—to restrain from claiming ritual leadership, from asserting our cultural sensibilities in ceremonial spaces, from attempting to photograph or otherwise capture native religiosity as a souvenir. “Step back,” the guidelines read. “Just listen. Do not rush to break the silence. Be present in a state of Humility and Grace.”

My first full day at Standing Rock, I attended the decolonization meeting held nightly in the dome gathering space at Oceti Sakowin. It was the day after Thanksgiving—referred to by some as “Thangstaken” or “Forgiving”—and the camps were crowded; hundreds of people packed into the dome for what became a three-hour discussion.

A woman in her twenties led the meeting, identifying herself as mixed indigenous Nicaraguan and Irish Canadian and offering those gathered an orientation to the concepts and practices of decolonization. Local leaders, she said, had witnessed white visitors committing many acts of colonial violence and appropriation while at the camps. She gave examples for discussion and suggested guidelines for being a guest on Standing Rock Sioux land. At the meeting’s conclusion, she asked if someone would pray. A native man offered a prayer to Tunkashila; then the woman at his side, also native, said her own brief prayer. After a pause, a white man appended, “We are all indigenous to this planet.”

After three hours of talking about recognizing native specificity, avoiding spiritualizing statements like “we are all one” or “we are all part of the same tribe,” and stepping back to respect native voices, bodies, and leadership—this man’s words made a palpable impact. “Really? Why here, now?” a native woman asked. Our convener—after a prayer for patience—explained again how a white person’s claim to language of indigeneity or nativeness is an act of colonization. With that, the meeting was over.

Drawn to the power and earth-connectedness of Lakota spirituality, white people at Standing Rock too frequently expressed our claims to total access to native religion, and even to leadership. Asked to live in prayer, to treat the camp itself as a ceremony, to honor human kinship with a living world, white guests stepped into this sacred space, and then overstepped. Well-meaning though we may have been, our co-optations were violations. As Kul Wicasa Sicangu Tintonwan scholar Nick Estes has written, “The appropriation of our sacred spaces, practices, and our very identities violates us as a people, a nation, and it violates our sovereign right to determine for ourselves who we are in this world and this universe.” Appropriative claims to indigenous spiritual practice by white guests at the camps became one more instance of white extraction of native resources: identifying something we wanted and claiming it for ourselves, without invitation.

At Standing Rock, my campsite included white people who did not attend the orientation meetings and so did not hear the requests for non-natives not to approach the river outside of ceremony, not to attend ceremony without invitation, not to make demands upon native people as a white person, not to dig additional fire pits into sacred tribal lands. By the time I returned from orientation, their fire pit was dug.

These white visitors had their travel expenses paid by a nonprofit supporting the pipeline opposition—despite multiple requests that white people not use Standing Rock donations to fund their trips—but they spent much of their time at the camp attending ceremonies rather than volunteering or participating in actions. They described their own spiritual experience of camp life as their primary motivation for being there. While in ceremony at Standing Rock, one woman had a vision of her inner warrior, “a native man on horseback.” Along with this claim to native personhood, she also made claim to native ritual, expressing her frustration that the morning water ceremony in the Sacred Stone camp was not being held near the water—the elders had moved it to the central fire as mornings grew colder. “It’s a water ceremony,” she said, and she asked the leaders to change the location—“if you ask a pipe carrier for a ceremony, they have to do it.” These white guests on tribal lands treated Standing Rock as a spiritual retreat, a vibrant gathering, and a place to live for free—making demands upon a space made possible by a context of radical indigenous action but not supporting it as such.

The white campers I spoke with identified themselves as leftist, as horrified by Trump’s election, as supporters of indigenous rights. The level of unconsciousness displayed at Standing Rock by many of us white progressives, however, showed once again how much work there is for white people to do in dismantling white supremacy. As Trump’s presidency confirms the liveliness of vehement racism in this country, the pipeline opposition on native lands provided another space where white power could be laid bare, this time amongst well-meaning white environmentalists, spiritual seekers, and activists. Standing Rock offered an unusual pretext of common cause, but this crucible of encounter between white settler guests and native hosts made for a native community beset by colonizing bids from within and from without.

During an action I attended at Standing Rock, Sicangu Lakota organizer Cheryl Angel said that to face this political moment, “spiritual people need to become activists, and activists need to become spiritual.” The Dakota Access Pipeline can’t be opposed without a commitment to prayer, she said, and prayer can’t deepen without a commitment to opposing injustice. The political and spiritual paths to liberation are not separable. White seekers and earth-lovers can’t assume that our spiritual or progressive alignments have actuated anti-racist or decolonial alignments in us; burning sage won’t cleanse us of white entitlement, appropriation, savior complexes, or other modes of conquest. As the camp guidelines say, “We are accountable for the things we do, and for things we don’t do.” If white settlers honor the wisdom of indigenous spiritual traditions, can we also honor the request to stop—at long last—taking everything there is to take from indigenous peoples?

If white people intend to join the Dakota Access Pipeline resistance or to enter into other native-led spaces, we might treat the Oceti Sakowin guidelines as a spiritual primer. “If you see someone who needs something, help them; don’t wait to be asked.” “Give more than you take.” “If this is not your home territory, remember that you are a guest.” “Withhold from sharing your ideas right off the bat.” “Listen . . . just listen.” These checks on white entitlement are the spiritual teachings that all white visitors to Standing Rock have been invited to receive. The work of decolonization—like contemplative practice—requires that white settlers improve our capacities for silence, for attention, for dispossession. It requires that we learn that not everything is about us; not everything is for us; not everything benefits from our input. There is spiritual experience there, too.

Lily Oster is a doctoral student in the Graduate Division of Religion at Emory University. With a focus on religion and ecology, Lily’s current research interests include eros, spirituality, and the earth; decolonial and anti-racist environmental thought; and posthuman, queer, indigenous, and feminist ecological theory. Lily has a background in literature, dance, environmental advocacy, and permaculture farming, and she holds a B.A. from Wesleyan University and an M.Div. from Harvard Divinity School.

2 thoughts on “Decolonizing the Sacred”