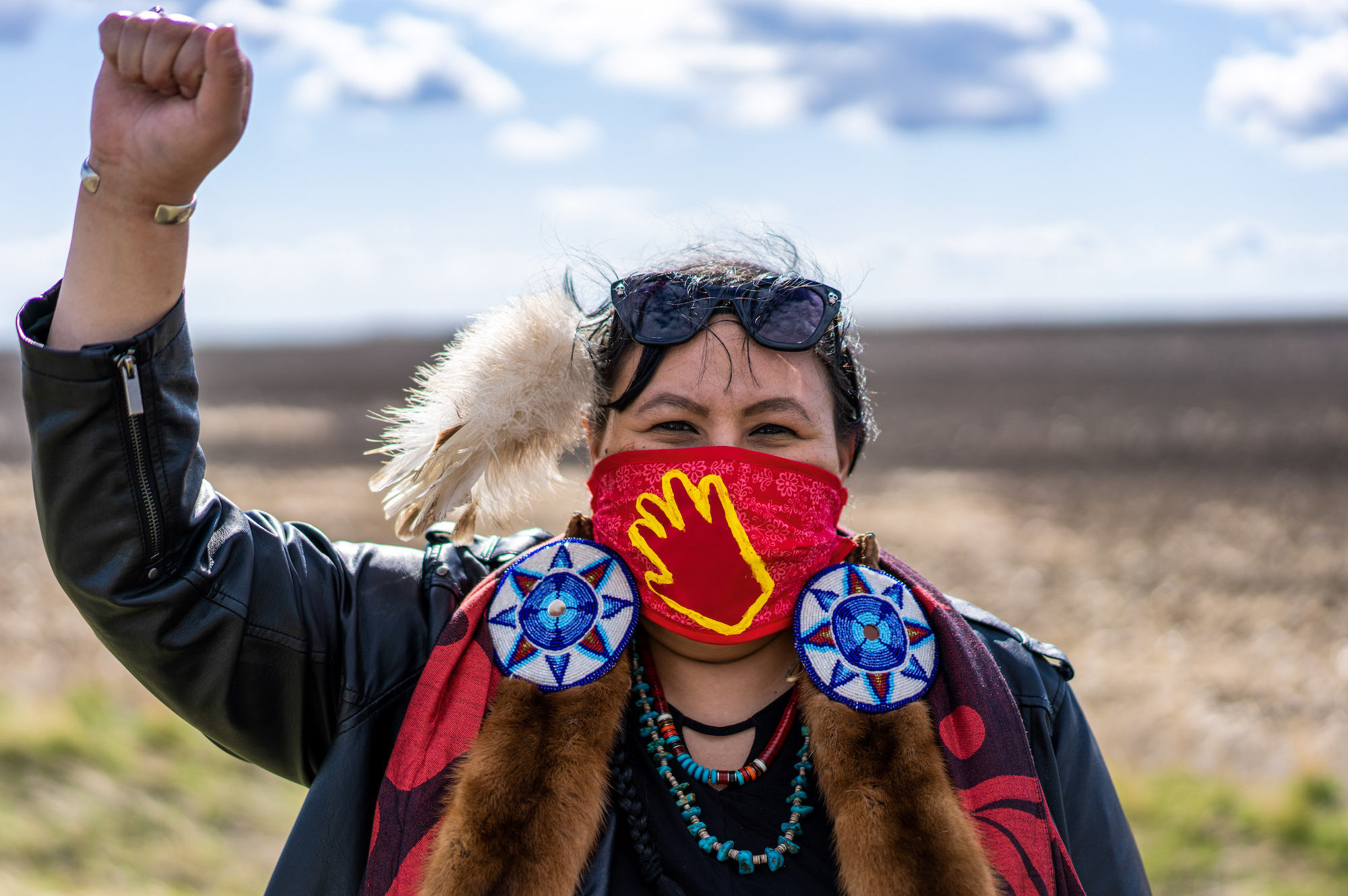 A recent Instagram post by the Quileute Nation read, “The Quileute Reservation at La Push, WA is closed to all visitors. Once it is deemed safe to reopen again, we welcome all visitors back to our lands. Except the Cullens.” The last phrase is of course a reference to the popular Twilight book series (a topic for another article), but the statement as a whole is telling, reflecting decisions made by tribal communities across the nation to close their borders and protect their most vulnerable from the spread of COVID-19.

The 574 federally recognized tribes in the United States represent incredible cultural, linguistic, and geographical diversity, and the impact of COVID-19 on these communities has likewise varied widely. Some have been hit hard, while others have escaped relatively unscathed. But all have wrestled with the question of how best to protect their communities, and many are choosing to enforce social distancing and lockdown measures much stricter than their surrounding communities or states.

By early March the Makah Tribe, just north of the Quileute on the Washington Coast, had closed their borders. “The reservation remains closed to all visitors until further notice…entry by land or sea is not permitted.” In California, tribes like the Hoopa Valley and Yurok closed their reservation to non-residents, though travelers were still permitted to pass through local highways, provided they did not stop. In South Dakota, the Cheyenne River and Oglala Sioux tribes set up check points on roads going in and out of their reservations, sparking conflict with state officials, particularly during the notorious Sturgis motorcycle rally. Unable to block access to their reservation, the Navajo Nation have nonetheless closed all tourist attractions, and have asked visitors to remain at home.

Such decisions to completely close is striking given the disproportionate toll such actions have on tribal economies: tribes depend on casino and tourism revenue to keep their schools, health centers, and other public services afloat. Given this, one might wonder why they were so quick respond, often enforcing much earlier and stricter closures than those in surrounding communities. What prompts them to choose health and safety over potential revenue?

In part, such choices were made because tribes knew they were particularly vulnerable. Socioeconomic conditions put many Native families at risk: while the median income in the United States is $57,600, the median income for a Native household in the United States is $39,700. Native communities are far more likely to lack access to clean water and sanitation, and are more likely to have health conditions that put them at higher risk, such as tuberculosis, diabetes, obesity, kidney, liver, and heart disease. Native people are more than twice as likely to lack access to health insurance. And Indigenous families are more likely to live in overcrowded and multigenerational households, where one’s “immediate” family might include grandparents, cousins, second-cousins, or great-aunties and uncles, making it more difficult to self-isolate.

Their fears were well founded. An analysis of national data through August 18th, 2020 by APM Research Lab has found that Indigenous North Americans have the second-highest rate of deaths due to COVID-19. While White Americans experience 40.4 deaths per 100,000, Indigenous Americans experience 73.2 deaths per 100,000, only exceeded by African Americans, who are perishing at a rate of 88.4 per 100,000. When adjusted for age differences in race groups, the Indigenous mortality rate is 3.4 times as high as that for Whites. In New Mexico, Native Americans are 9 percent of the state’s population, but account for 60 percent of the deaths related to COVID-19. As dire as these statistics are, they are certainly underestimates. For the first months of the pandemic statisticians simply labeled Native Americans as “other” in federal reporting, obscuring their numbers. As of August, only thirty states were reporting data specific to Indigenous communities.

Indigenous communities’ responses to this pandemic are also motivated by historical memory. Native communities in this country have a long and tragic history with epidemic disease. Prior to colonialism, somewhere between five and eighteen million Indigenous people lived in North America. By 1800 that number had dropped to 600,000. By 1890 it was 250,000. The vast majority of these deaths were caused by introduced diseases: smallpox, plague, cholera, influenza, diphtheria, malaria, tuberculosis, and others.

In some instances, disease was even used in government sanctioned acts of germ warfare. In 1763, thousands were infected when blankets infected with smallpox were distributed among the Odawa, Ojibwe, Lenape, and Shawnee at the instruction of Lord Jeffrey Amherst, who wrote to his field commanders, “You would do well to try to inoculate the Indians by means of blankets as well as to try every other method that can serve to extirpate this race.” In 1832, Andrew Jackson’s administration intentionally relocated a Choctaw community into the middle of a cholera epidemic, overruling the protests of local physicians, humanitarians, and the Choctaw themselves. In the Pacific Northwest, settlers at Fort Astor used Native people’s terror of smallpox as tool for control when Fort Astor official Duncan McDougal told tribal leaders: “The white men among you are few in number it is true, but they are mighty in medicine.” He pulled out a small vial and held it up for everyone one to see. “In this bottle I hold smallpox all corked up; I have but to draw the cork and let loose the pestilence to sweep man, woman, and child from the face of the earth.”

After the establishment of reservations in the 1850s, tribal communities continued to have the lowest life expectancies and highest infant mortality rates in the nation. Despite treaties that guaranteed medical care, the vast majority of Native people lacked access to physicians until the creation of the Indian Health Service in 1955. Even then, such care tended to be located in large, regional IHS hospitals that struggled under poor funding, with locations that required patients to travel hundreds of miles to reach. Beginning in the 1930s innovative programs in the Navajo health service aimed to improve culturally congruent care, and the 1968 Community Health Representative Program improved outreach in many rural communities. However, by the late 20th century the IHS still provided just one physician per 1,500 Native patients. The World Health Organization recommends a minimum threshold of 1,000 patients per physician. In the United States there are an average of 373 patients per physician, while Cuba leads the world here, with a patient-to-doctor ratio of 155 to 1.

Real reform for Native American healthcare began with the 1976 American Indian Self-Determination and Education Assistance Act, which made it possible for tribes to contract with the federal government to manage their own care. Today, many Nations manage their own local wellness centers, clinics, and hospitals, drawing on the best of western biomedicine and Indigenous traditions. Such healthcare centers are only partially funded by federal grants, but also depend on tribal casinos and other business ventures to stay open.

Historical memory helps to explain why Indigenous communities responded so quickly and forcefully to the threat of COVID-19, but tribal responses have also been guided by deeply held spiritual traditions and ethical principles. The realities of COVID-19 have required the suspension of much of collective religious life. Large ceremonial gatherings like the intertribal canoe journey in the Pacific Northwest, sun dances on the Great Plains, and Powwows throughout the Indian Country have been canceled. Native American churches, prayers, and expressions of solidarity have moved online, even while spiritual life continues within families, in private prayer, and in smaller outdoor gatherings.

The first of these is the understanding that health and healing are based upon balanced harmonious relationships. Such relationships extend to the human, ancestral, and other-than-human worlds. In this worldview, a healthy self is not an independent individual, but rather someone who exists within a network of relationships, honoring obligation to those relations, and receiving help in return. This ethical obligation of relational reciprocity is foundational to Native North American cultures, and helps explain why in these communities one’s obligations to care for others takes greater precedence than in mainstream America. Theologian, philosopher, and legal scholar Vine Deloria Jr., put it best: “The basic problem is that American society is a ‘rights society’ not a ‘responsibilities’ society.” While members of mainstream American society might privilege personal rights to eschew a mask over and against their moral obligation to care for the the health and safety of others, Indigenous communities instead affirm this fundamental commitment to relational responsibility.

Native communities are also guided by a commitment to future generations, not simply the needs of the present moment. A Haudenosaunee (Iroquois) teaching sums up this perspective well: decisions should be made with the next seven generations in mind. And that care for the next seven generations places tribal decisions in perspective. While mainstream America seems to prioritize short-term financial needs, Indigenous communities look toward a farther horizon.

Finally, and perhaps most importantly, Indigenous communities are guided by a reverential care for their elders that is unlike anything seen in mainstream American society. And it is perhaps this foundational value that most inspired such a swift and emphatic response to COVID-19, with the disproportionate threat it poses to elders.

Religious Studies scholar Michael McNally’s truly excellent book Honoring Elders: Aging, Authority, and Ojibwe Religion discusses what it means to be an elder in Native America, why they are revered, and how cultural practices help to instill this essential ethical commitment. McNally notes that an elder is not just someone who has lived a long life, but someone who has successfully negotiated the trials of life on Indigenous terms. To grow in maturity in these communities is a good thing, because it means one has grown in wisdom and spiritual power. An aging body, alongside a life well lived, is testament to “the maturation of knowledge and power that these bodies carry, not to mention the authority of experience accrued, tried, tested, and tempered over time… Old age itself marks a kind of religious attainment, and eldership carries a corresponding religious prestige and authority by virtue of the mastery of relatedness.”

Elders are a living link to previous generations, languages, and times before the devastation of colonialism. They are valued because as McNally puts it they “pass on power and knowledge toward life to younger generations, in return for respect.” And respect is the “paradigmatic ethical relation that grounds all other relations in the social, natural, and spiritual realms.” Respect here means to treat another as a subject, not an object. It means to treasure, show regard, and compassion for another.

Veneration and care for elders runs deep in Indian country. It’s reflected in how one speaks to or about elders; it’s reflected in where they are seated, when they are served. It’s deeply embedded in the daily life of caring: ensuring elders have their needs met, are not lonely, and know they are valued. But as McNally makes clear, respect for others is something that is learned. If Native people “do succeed in distinctly honoring elders, it is emphatically not because they naturally do so. Instead, honoring elders has required hard work, the disciplined labor of moral teaching and the ritualized decorum that constitute the authority of elders through practices of deference.”

I find hope in these values of relational reciprocity, care for future generations, and respect for elders because these are not values exclusive to Indian Country, but inherently human values, spiritual principles that can be learned, that can be practiced, and that can help guide all of us as we respond to this, and future health crises. History has taught Native communities to guard their sovereignty and take care of their communities. Non-Native people can learn from this history as well, to insist that Indigenous communities receive the resources they need and the care they were guaranteed in their treaties. We can also learn from their spiritual teachings, to thoughtfully consider how we can best respect and care for the most vulnerable among us.