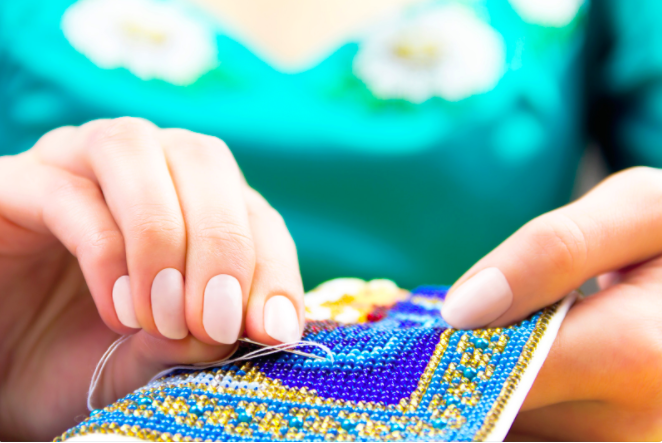 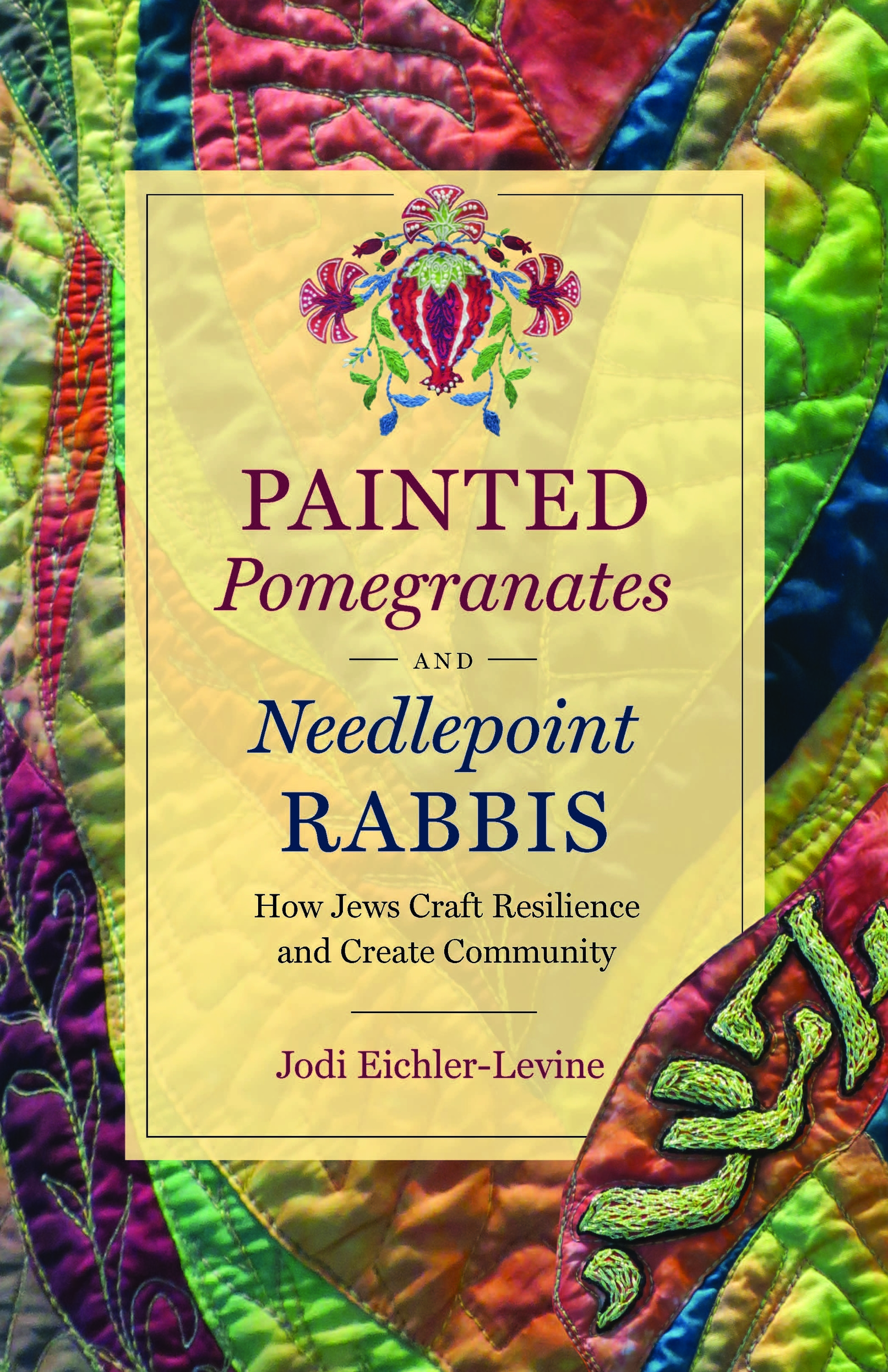 Painted Pomegranates and Needlepoint Rabbis tells the story of how contemporary Jews craft a “Judaism of feeling,” one in which everyday practices like sewing, quilting, and knitting graft them into a resilient religious community.  The book is based on three years of interviews and joining in with craft circles across the United States. Many of the people I met told me that, through their projects, they fulfill the Jewish mandate of tikkun olam, “repairing the world.” This phrase, a crucial one in certain strands of Jewish mysticism, now connotes ideas about social justice quite broadly among Jewish Americans. The book’s fifth chapter shows how art and craftivism demonstrate a way of building a Jewish life outside synagogue walls, in the studio and in the streets. In this excerpt, readers meet fiber artist Heather Stoltz and ceramicist Linda Schwartz. In different media, both women work through moments of grief by transforming Jewish texts or ritual items into powerful works that address gun violence and racism, respectively.

From Painted Pomegranates and Needlepoint Rabbis: How Jews Craft Resilience and Create Community by Jodi Eichler-Levine. Copyright © 2020 by the University of North Carolina Press. Used by permission of the publisher. www.uncpress.org

On Heather Stoltz’s fiber art blog, Sewing Stories, there is an image of a bright orange quilt, bisected by purple triangles, and almost entirely covered in small black satin ribbons. These are
not ordinary ribbons. Rather, they would be familiar to many people who have attended a Jewish funeral. Traditional Jewish mourning practice entails the rending of the mourners’ garments as a visual sign of the loss they have experienced, the broken incompleteness of their world without their loved one. Some contemporary Jews still do this literally, wearing a shirt or other item of clothing they have torn. Among other Jewish Americans, however, a different practice has evolved. Instead of ripping a piece of clothing, these mourners pin a small black satin ribbon (called a k’riah, for “rending,” ribbon) to their lapel or dress. The ribbon is then torn, sometimes in a formal ceremony, other times in a quiet moment. Stoltz used more than a hundred of these black ribbons in her quilt Dark Days: Where Does It End? She explained her piece in this way: “In the three years since the shooting at Sandy Hook Elementary School, there have been approximately 150 school shootings—that’s almost one each week. The number is hard to imagine, as are the tragic deaths that resulted. This piece marks each shooting with a black k’riah ribbon with the date, town, and name of the school written on it.” 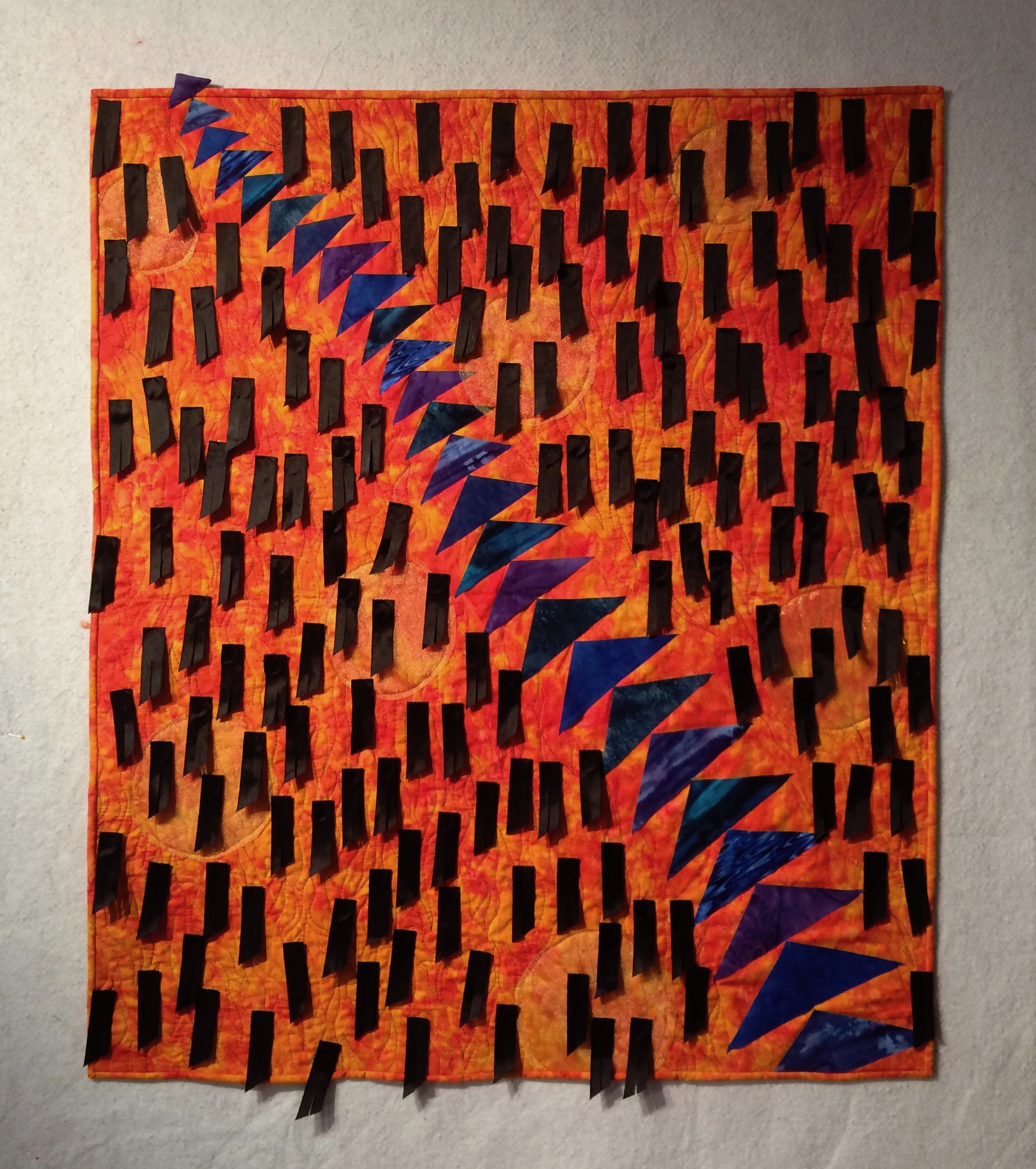 For Stoltz, school shootings are deeply personal. “When the Sandy Hook shooting happened, my nephew actually was in the school at the time,” she told me in her suburban New York living room. Her nephew was six in 2012—in the same grade as most of the victims—and lost one of his best friends in the shooting. “I had to react to that,” she said. On the blog, she describes the first quilt she created in this series on school shootings and gun violence. Titled Shattered Childhood, it depicts a large silhouette image of her nephew standing beside his friend. The text of a news article about the shooting is superimposed over the silhouette, but it is fragmented, literally shattered, “cut into 26 pieces to represent the 26 victims and to resemble broken glass.” In the upper left-hand corner of the quilt, five colorful balloons drift up and away toward the edge of the scene. They commemorate a memorial balloon release initiated by her nephew, in which he and other surviving classmates took part. Stoltz writes that they are “a symbol of hope that the community rise from this tragedy, carrying with it the memory of those lost.”

Both Dark Days: Where Does It End? and Shattered Childhood constitute Jewish responses to America’s gun violence epidemic. Dark Days takes the k’riah ribbon, which is usually an ephemeral piece of Jewish ritual material culture, and renders it permanent, a sign of mourning in the aggregate that is unending, affixed against a vivid orange background that suggests fire and danger. Less directly but no less evocatively, the panels in Shattered Childhood that “resemble broken glass” evoke Kristallnacht, the night of broken glass, of widespread violence carried out against German Jews on November 9–10, 1938, an event that looms large in histories of the Holocaust.

The idea of shattering also suggests the kelipot (literally “shells” or “husks”), which are the containers that held divinity then broke, in the mystical Lurianic creation myth. That narrative is also the story from which the notion of tikkun olam emerges. In Dark Days: Where Does It End? sewing does not heal. Instead, the viewer of this piece is affixed to the repetitions of near-permanent violence. Through this quilt, Stoltz demands that we confront pain and that we dwell in it, that we mourn, rather than leaving it behind. Shattered Childhood simultaneously heals and retains a sense of brokenness. The balloons do evoke hope, but the “shattered” panels of the news story remind us that we cannot undo the loss of life, and in particular young life, that has occurred. Reparative as sewing might be, there are things that it cannot mend. Stoltz’s work confronts us with this existential imperfection. The quilts are aesthetically beautiful. They are also steeped in horror.

“Fiber art in particular has this history of talking about social justice issues,” Stoltz told me. When she makes commissioned pieces, as she often does, those are about what a client wants aesthetically, but when she makes an art piece for herself, she confronts a problem or tells a story. For her, art is often not playful (a theme that came up in many interviews) but quite serious. “I feel like what I create for my own work is something that I have this need to tell a message. All of them tell a story in some way. Whether that’d be trying to give people a new interpretation of a Jewish text or expressing some of the joys and difficulties of parenthood or trying to say something about a social justice issue, it’s always a message for them. So, it doesn’t feel so playful.” She pointed both to historic examples and to the work of artists in various New York collectives, such as Jewish Art Salon, as examples of art that makes a statement. Stoltz also described how her upbringing taught her to be actively involved in working toward social justice. “Both of my parents volunteered for all kinds of things. My brother has type 1 diabetes, so we were always involved in the juvenile diabetes research foundation. I don’t even remember how old I was, probably four or five the first time we went to our first walk and I held a handout.” She added that her parents “made sure that we knew we lived in a place of privilege. We traveled a lot. . . . Wherever we were, I remember it wouldn’t just be that we would be on vacation on the beach. They would make sure to drive through the poor area of the town and remember.”

Social justice intersects with Jewish themes in nonfiber media, too. In December 2016, I was browsing the items at a Pennsylvania JCC craft fair when I came across a ceramic plate with a quotation from the book of Amos: “Let justice well up like water and righteousness like a mighty stream” (Amos 5:24). I was struck by the use of this quotation, which was frequently deployed by Martin Luther King Jr. and other Civil Rights leaders, but also by a note next to the plate, which stated that a portion of the proceeds from its sale would be donated to the Southern Poverty Law Center. Here amid the holiday merriment was a small, stark moment of activism. 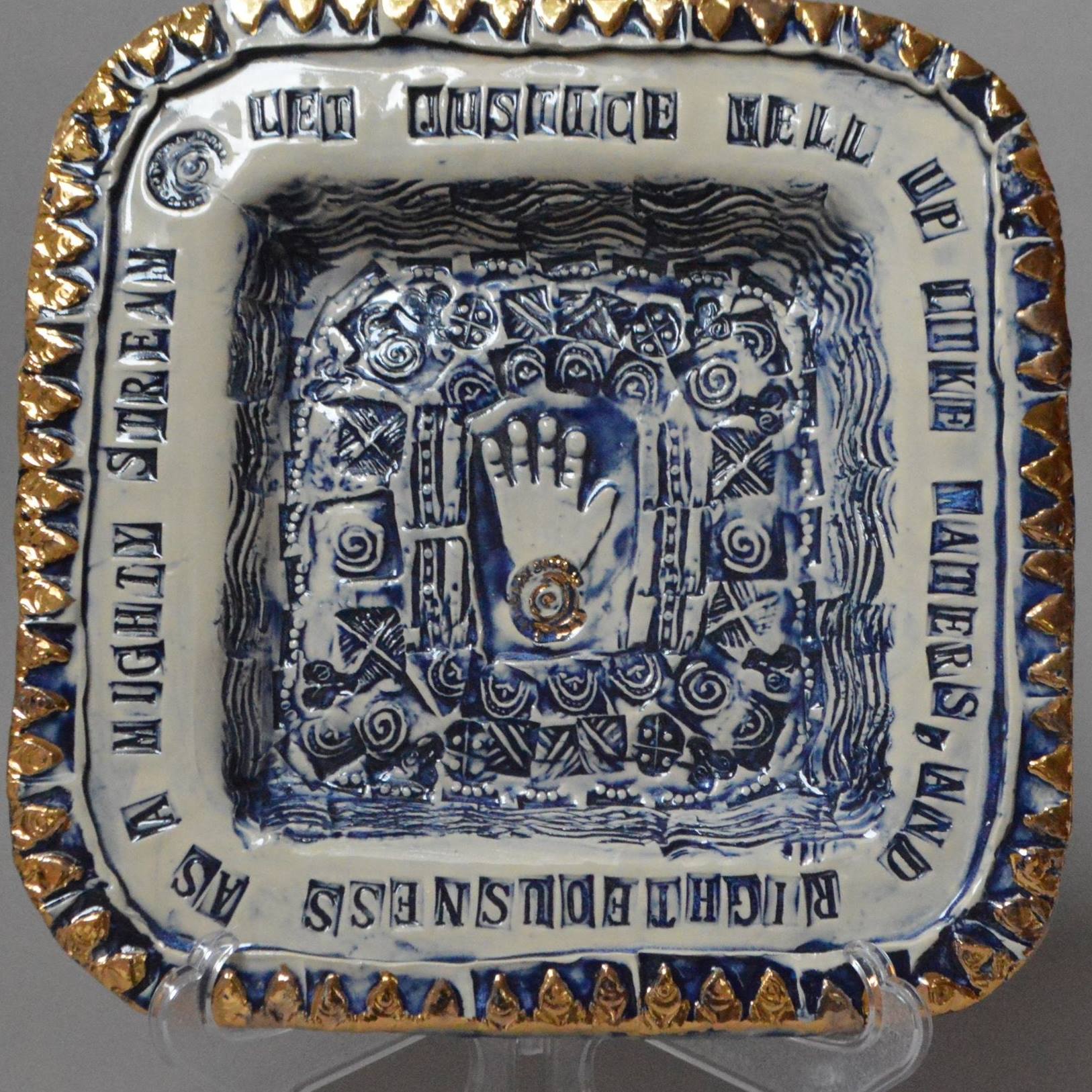 Two months later, I interviewed Linda Schwartz, the creator of that plate, as well as numerous other items of Judaica and social justice art. During our conversation, which took place just a month after President Trump’s inauguration, Schwartz shared how her Jewish upbringing had been intertwined with political and ethical concerns: “Even though I wasn’t raised very religious, I was raised in a very moral way, with my father really big on social conscience. We were really raised with social justice in mind. . . . I felt a real empathy for the Civil Rights movement because I saw it as an extension of the Jews fleeing Egypt, just like at the end of our seders. Even though we didn’t go to synagogue and we didn’t go to Hebrew school, my mother drummed into me the golden rule.”

Jodi Eichler-Levine is the Berman Professor of Jewish Civilization and associate professor of Religion Studies at Lehigh University, where she teaches courses in Jewish studies, North American religions, and gender studies. She is the author of Painted Pomegranates and Needlepoint Rabbis: How Jews Craft Community and Create Resilience (UNC Press, 2020) and Suffer the Little Children: Uses of the Past in Jewish and African American Children’s Literature (NYU Press, 2013). Her work has appeared in The Washington Post, Salon, Newsweek, Kveller, Religion Dispatches, and many other popular and scholarly venues.