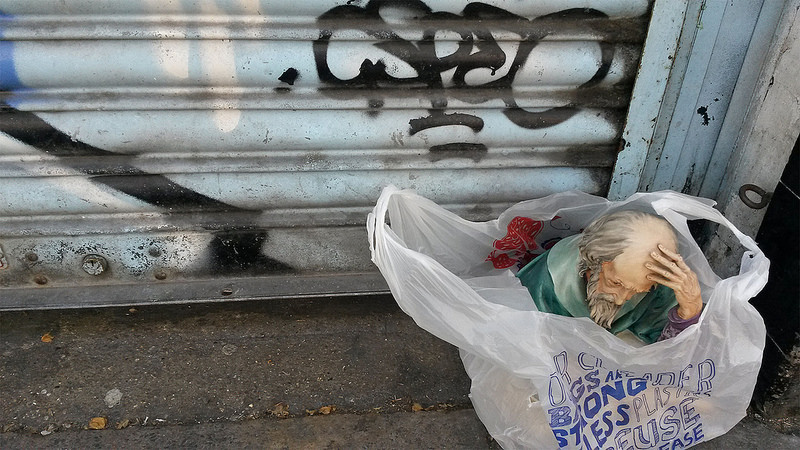 When I was a young, idealistic, newly-minted PhD, moving from the University of California, Santa Barbara, to my first and only job at Emory University in Atlanta, Georgia, I had one primary, driving goal in teaching: to clarify for students the role of religion in society. Now that I’m older, wiser, and tenured, a different motivation is driving my pedagogy: my ultimate goal these days is to confuse the hell out of undergrads.

Just take a look around. Religion is everywhere, and when people talk about religion they actually think they know what they are talking about. But they don’t. Religion, what we call “religion” is a mess. No clarity conceptually, no agreed upon understanding of the word, no neutral, or better “operational” definition for our studies or our discourse. The only hope for the young people, therefore, is to sow seeds of confusion, uncertainty, and indeterminacy–and yes, especially about “religion.”

How better to prepare students for the real world they will finally enter after decades of education than to speak honestly and knowledgeably about the unpredictability, instability, and variability of religious expressions? I know it’s quite popular these days to talk about “religious literacy” and spread the gospel of “teaching, not preaching, religion” in public education. It is an enlightening, and good-hearted approach to make the academic study of religion relevant and, let’s face it, facts are important.

My goal aims lower, and some might even consider it a nefarious purpose, because it seeks to pull the rug out from under students, a trick that I must confess brings me a great deal of pleasure. In contrast to what some scholars say about how dumb students are today (including my colleague here at Emory), my students are sharp, smart, and sophisticated. Yes, they are too career-oriented, they have next to no attention span, they are constantly networked and interactive, and they are seriously medicated. But they are intelligent, and come in to class knowing some things and wanting to learn more.

I exploit that eagerness, and jump at the chance to show them that what they think they know about religion coming in to the course is built on a house of cards. For example, in the religion and sexuality course I am teaching this term, I quickly and forcefully started with a well-known and effective one-two punch in the first two weeks: first, a brief etymological discussion of the word “religion” (kind of like a blow to the nose); next (the upper cut), a dizzyingly brief tour of religious diversity through time and around the globe. Most, though not all, of the students are easily disoriented and enter a state of wonder and confusion about it all. Then we turn to a similar discussion about “sexuality.”

I tell them, “Don’t tell your parents what you’re learning here.”

In a nutshell, some of the key points of confusion I hope will disturb and unsettle them are:

Look it up in the Oxford English Dictionary, if you dare. Completely embedded in western culture with meanings dramatically shaped by Christianity

Christianity, Buddhism, Islam, Judaism, Hinduism. You know the drill. These are labels that deceptively suggest unities that don’t really exist.

Word up. Anything can be sacred.

Emile Durkheim nailed it: societies determine what is sacred. In the old days, a totem could be sacred; in modern times, the bible might be sacred; in the time of the “nones,” those who don’t affiliate with any religion, crystals may do the trick.

Whether they are Korean students brought up in a conservative Protestant household, or Jewish students from a reform family context, or come to class in hijab and practice Islam, or believe in nothing and see themselves as atheists, their presumptions and beliefs about religion (if they have any at all) are determined in large part by one or more of these influences: family, religious institution, education, or popular cultures and media. Even if they come into the course strong in their own particular faith, religion is some “thing,” out there in the world, and it can be cordoned off and separated from other “things” like politics, history, culture, economics, and so on. Religions are easy to spot, they are taught, and conform to certain expectations.

In my course I seek to crush this type of thinking. Confusion reigns with religion, and if you look beneath the surface and into the nitty-gritty of how humans grapple with suffering and pleasure and violence and death and sexuality and family and hatred and so on, you will not find coherence and constancies that can be easily captured with simple and simplistic labels. Instead, in the flux of historical change and social reformations, religious life and meanings are unstable and shift, and often blend in surprising and unexpected ways with other areas of culture. Think of the history of Confucianism in China, for example. Or on more familiar turf, think of the relationship between religion and entertainment. Do worship services look more and more like popular entertainment? Can popular entertainment be religious for some fanatics? It all depends how you look at it, I tell the students, and there is no one special theory or belief or faith position or explanation that will satisfy everyone. If there were, I’d be out of a job.

Gary Laderman is the Goodrich C. White Professor of American Religious History and Cultures, and Chairperson of the Department of Religion at Emory University. He writes on topics such as death, popular culture, science, sexuality, and drugs. Laderman was one of the founders of Religion Dispatches and is currently Editor of Sacred Matters.