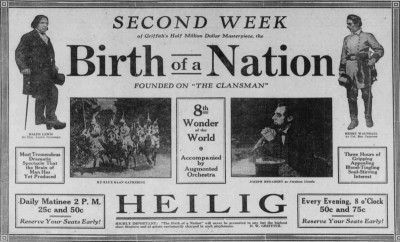 Unlike the social photography of his contemporaries Jacob Riis and Lewis Hine, which used the camera to expose conditions in need of reform, as well as to incite a moral response in beholders, Griffith relied on inherited visual traditions that positioned photographs, in particular, as historical fragments of a past in need of remembering. The Civil War was the first American war to yield a photographic record (daguerreotypes from the Mexican-American war in the late 1840s were limited to portraits and some landscapes and, due to restrictions of the medium, were never circulated as photographs). But the “record” was incomplete and largely manufactured, given technological limitations that precluded battlefield exposures. Still, they were circulated not as illustrations of the war but as evidence, indeed as souvenirs. Within months of the battle at Antietam, Mathew Brady’s gallery on Broadway in New York exhibited a series of photographs that the press likened to “dripping bodies” that brought battlefield carnage into the streets and homes of citizens far from the front. Alexander Gardner’s haunting photographs of Confederate dead became iconic in this regard. From the beginning, then, photographs of the war were approached as authentic mechanisms of history, as reliable measures of historical fact.

The largest collection of negatives from the war, produced by Brady and Alexander Gardner, changed hands several times between 1862 and the late 1880s when they were acquired by John C. Taylor. Taylor oversaw the manufacture and sale of stereographs and mounted prints from these historical negatives to individuals, all the while promoting the potentially lucrative business of stereopticon exhibits to potential agents. Like those earliest exhibits, Taylor’s War Photograph and Exhibition Company marketed these prints as historically authentic connections to a distant past, fast becoming, as the promotional copy had it, “only the vision of a dream.” Pictures from memory or even woodcuts based on photographs “are, in a greater or less degree,” the Company catalogue instructed readers, “imaginary conceptions of the artist. Happily our Government authorized, during the war, skillful photographers to catch with their cameras the reflection, as in a mirror, of very many of those thrilling and interesting scenes.” “These views,” it continued, “vividly renew the memories of our war days.” More than a decade later, as fiftieth anniversary commemorations began in earnest, the negatives were again sold, this time to Civil War veteran Edward Bailey Eaton, who instead of selling the photographs as stereograph series, magic lantern exhibits, or large prints, instead “decided to take prints from the historic negatives, reproduce them in ten memorial volumes, and put them within the reach of every American home.” Like previous series from these negatives, Eaton’s enterprise emphasized the connection these photographs, now halftone reproductions in a series of volumes that would sit upon your shelves, to the original moment of exposure. Brady dropped everything, one advertisement for the volumes conveyed, to go to the front, “armed not with a gun, but with the instrument that was to hand down to posterity the most accurate story of the war in existence; for the eye of the camera sees all things and cannot tell aught but the truth.”

The first half of Birth of a Nation is situated within this photographic history of the Civil War. Griffith had produced a number of shorter Biograph films drawing on Civil War themes in previous years, many of which explored the triumph of moral imperatives within fraught military directives. In the Border States, for instance, a 1910 film starring Henry Walthall, who would later play the role of Ben Cameron in The Birth of a Nation, a young daughter of a Union soldier saves the life of a Confederate soldier who later returns the favor when her wounded father is being pursued after breaking enemy lines. Walthall also stars in The House with Closed Shutters, also produced in 1910, another moral tale with a clear message about the dire consequences of shirking one’s duty. These earlier films draw on the moral legacy of the Civil War, often through plotlines that emphasize the common humanity of both sides of the conflict. But they make no claims to history. By contrast, in The Birth of a Nation, heroic battle scenes anchor the historical claims Griffith asserts through the authorizing mechanism of the camera. It matters not that the film breaks the chain of custody, creating new negatives with no direct ties to the scenes of battle that Brady and others had recorded half a century earlier. One could argue, in fact, and this seems to be the director’s intention, that the elaborate scenes Griffith staged on Universal Field in Los Angeles, now the site of a Burbank cemetery, were received by audiences as greater claims to truth than the still images that came before. Griffith’s cameraman, Billy Bitzer, had been one of the first American cameramen to take motion pictures of war when he went to Cuba on behalf of the American Mutoscope and Biograph Company in early 1898. The “cumbersome camera” and lack of horses to cart the “two thousand pounds of storage batteries, packed in many boxes” meant that Bitzer and operators from other motion picture companies were pressed to invent techniques that captured the sense and threat of war without direct access to armed engagement. Bitzer’s 27-foot reel of American casualties embarking in row boats demonstrates both the limitations of war photography at the turn of the twentieth century as well as the cinematographer’s developing technique that would go such a long way toward accomplishing Griffith’s vision of that earlier war in Birth of a Nation. Bitzer was also behind the camera in Griffith’s earlier Civil War shorts. Even as the cinematic technique, with elaborately staged tableaux comprising most of the camerawork, invoked association with stereographs, lantern demonstrations, and other familiar forms of visual culture, Bitzer was bringing a new repertoire to Griffith’s films that had been, quite literally, battle tested. While perhaps not as impressive to our sensibilities, the Biograph catalogue wrote that the wounded soldiers reel, one of the first motion pictures of war, “has made a marked sensation wherever it has been shown.” Grounded in a visual tradition of historical authenticity, Birth of a Nation made a visual claim to provide American audiences with the first battlefield footage of any American war as well as the moral lesson that such footage revealed. Having gained audience trust in the first act through established habits of beholding, the truth claims of the camera baptize the inventive drama of the second act in the same font of historical authenticity. “The eye of the camera sees all things and cannot tell aught but the truth.”

Fifteen years after its original release, Birth of a Nation was rereleased with synchronized sound. In the 1930 rerelease, Griffith added a prelude to the film that framed this and subsequent theatrical revivals within the fidelity to history that the photoplay had aspired toward in 1915. The prelude is a staged conversation between Griffith and the actor Walter Huston, overheard by and from the vantage of three children. Audiences enter the conversation as Huston is gifting Griffith a saber worn by a Confederate soldier.

As he gives Griffith the sword, Huston asks, “When you made The Birth of a Nation, did you tell your father’s story?” Griffith initially balks, before reflecting, “well, after you mention it perhaps I did.” The story, he continues, “began when I was a child,” sitting under a table to listen to his father, who was a former Confederate colonel, and friends talk about the battles they had been through. “Those things impress you deeply,” he tells Huston through a cloud of smoke. And then Huston asks Griffith, “Do you feel as though it were true?” Yes, Griffith answers, “true as that blade,” gesturing to the saber on the table between them. Listening to his father’s stories of war and his mother’s of “staying up night after night sewing robes for the Clan,” these were personal experiences that Griffith made true—as true as the silver blade and the robes of the Clan— through the transformational power of the camera. “Yes, I think it is true. But as Pontius Pilate said, ‘Truth, what is the truth?'” The prologue positions the three children as off-camera auditors, much like the boyhood Griffith listening under the table to grownups talking about war and sacrifice, and through them we too hear Griffith relate the “great struggle, great story” to new generations. Recalling tales of Pickett’s charge, Griffith extends an invitation to this new generation of Americans. “When the fathers dropped their guns these, nothing but children, picked them up and went on fighting, and they fought to the bitter end.” So it is with his film, whether in 1915, 1930, 1958, or 2016. “It’s the story itself, it tells itself,” Griffith says as the prelude dissolves into his most famous film. But of course it was a story told through pictures, in which inherited practices of photographic beholding met the new visual regime of the cinema in the racially charged world of Jim Crow America.

Rachel McBride Lindsey is a historian of American culture who specializes in religion, race, and American public life. She is currently a postdoctoral research associate in the John C. Danforth Center on Religion and Politics at Washington University in St. Louis. Her teaching and research work to understand critical issues of religion and race in American public life, particularly as they relate to visual culture, media, and technology. She can be followed @rmclindsey.