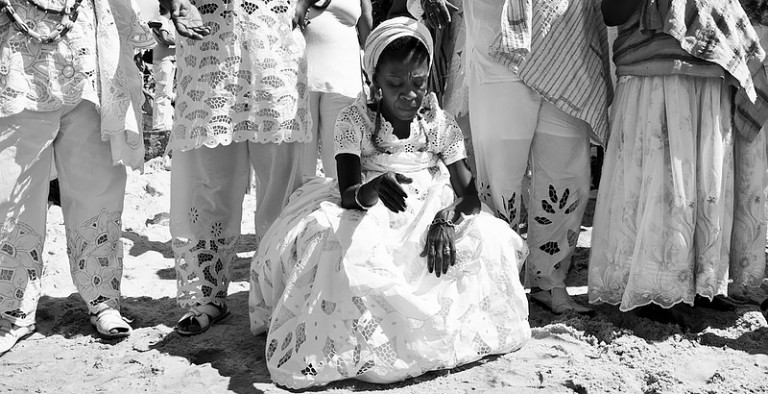 We’re here for a conversation on African heritage religions in the African diaspora, namely the Afro-Brazilian religion of Candomblé. Dr. Rachel Harding is Professor of Ethnic Studies at the University of Colorado and Denver. She is a poet, historian, and scholar of religions of the Afro-Atlantic diaspora. She is author of A Refuge in Thunder Candomblé and Alternative Spaces of Blackness (Indiana University Press, 2003), and she writes about mysticism, creativity, and social justice in the experience of communities of African descent in the United States and Brazil. Donna Roberts is producer, director, and co-writer of the recently completed documentary film, Yemanjá: Wisdom from the African Heart of Brazil, narrated by Pulitzer Prize-winning author Alice Walker. Ms. Roberts’ background is in broadcast journalism, television production, and environmental advocacy and education. Prior to this film, she wrote and directed Sea of Uncertainty, an award-winning public television documentary about the Deep Water Horizon oil spill in the Gulf of Mexico.

Dianne Stewart (DS): Welcome and thank you for being here. I thought we could start by talking a little bit about Candomblé’s history. So I wonder, Dr. Harding, if you could help situate Candomblé for us. In the twenty-first century, increasing populations are becoming aware of the presence of African-heritage religions in the diaspora, but we have still much to learn from and about these religions. Can you situate Candomblé historically and geographically for us? What is this Brazilian religion’s relationship to Africa? What are its core beliefs and practices? How does it ideally orient practitioners to live and act in the world?

DS: Thank you for that. Today, many of my students, if asked to complete a research project, will go to Wikipedia. And in advance of our event last night where we had a chance to see a private screening of Donna’s wonderful film, Yemanjá, I went to Wikipedia. I was looking up something specific to Candomblé and the very first line, the very first sentence or maybe the second, described Candomblé as a syncretic religion. I am intrigued by the way you introduced and defined Candomblé—you didn’t emphasize the Catholic elements, nor did I see them emphasized in Yemanjá, Donna. But scholars for so long have focused on the Catholic elements in Candomblé. Do you have any response to that, especially in  light of how the traditions might be taking form today in the twenty-first century? Also, your comment about the nations—how the different nations are formed under the umbrella of Candomblé—we don’t often think of syncretism among those nations. We only think of a generic African source and a generic Catholic source, that’s Western, being syncretized. I just wonder if you have any other comments about that?

DS: And Donna, we were just really mesmerized by what you were able to put together in this documentary film, Yemanjá. Watching it last night made me so aware that, certainly, I can draw film into my classes, but as a scholar I don’t have the kind of access and means that you have as a filmmaker to disseminate credible information about African heritage religions to wide populations. I wonder if you could talk a little bit about your project, Yemanjá, and how it helps to correct the colonial record, to disseminate credible data about Candomblé, especially against this traffic of colonial distortions of African heritage religions. What influenced or motivated you to take on this project and how does it correct that colonial record?

DS: Absolutely, there are so many remarkable achievements in this film. I want to bring Rachel back in—I know you are not a stranger to documentary film—I’m thinking of your Veterans of Hope project, which has documented the mystical, spiritual, and social activism of so many great leaders across this country. I’d love to hear your comments on what you think this film does for enhancing our knowledge of Candomblé, both in the classroom and in the wider public.

DS: There are so many jewels in it [this film]. As someone who works mostly in the Anglophone Caribbean, I cannot overlook the countless resonances and places of compatibility among diverse African diaspora religions. Analogues between Candomblé and African-heritage religious cultures in Jamaica and Trinidad are ever present, given what I’ve experienced in the field. For example, among Jamaicans of Kongo descent, the ritual community relates to the natural environment just as you said. These are really human subjects as well. Plant life cannot be discarded, cannot be trampled on. They are sacred medicines we rely on, to nourish us and to heal us, and that came through so beautifully in the film. Having followed some of the Kongo-Jamaican practitioners into the mountains and into the forests to ritually collect the plants, to wake them up, to engage them, to ask for permission to utilize their life-giving power has made evident a complex system of significations in Africana approaches to health, medicine and spiritual care… One of the very powerful messages from this film is how the mothers of the Candomblé tradition, these authorities, these leaders, are negotiating and navigating their civic environment. How they are placing Candomblé resources in dialogue with resources in civic society. We saw this with [the] health fair and in a number of places. I wonder if you could comment on that more?

Dianne Stewart is Associate Professor of Religion and African American Studies at Emory University. She is the author of Three Eyes for the Journey: African Dimensions of the Jamaican Religious Experience (Oxford University Press, 2005), co-editor of the new Religious Cultures of African and African Diaspora People series (Duke University Press), and is near completion of a new manuscript, Religious Vocabularies of Africa: Obeah, Orisa and Identity in Trinidad, which is based upon five years of research in Trinidad and Tobago, including one consecutive year of residence.