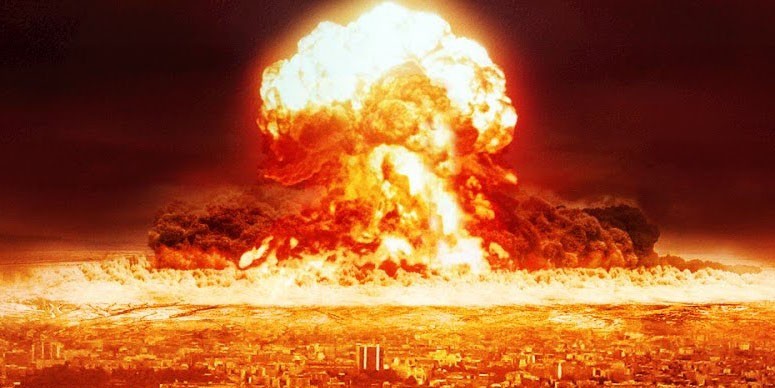 In our interview series, “Seven Questions,” we ask some very smart people about what inspires them and how their latest work enhances our understanding of the sacred in cultural life. For this segment, we solicited responses from Matthew Avery Sutton, author of American Apocalypse: A History of Modern Evangelicalism (Harvard University Press, 2014).

There were a few influences, both personal and academic, that inspired this book. On the academic level, I grew increasingly fascinated with apocalypticism during my research on Aimee Semple McPherson (the subject of my first book). McPherson was convinced, as were many of her fellow pentecostals, that Jesus’s return was imminent. This shaped her work.

On a personal level, I have long been fascinated with people who believe that the rapture and rise of the Antichrist are imminent, and that the world is ending. In high school, I went with a friend to a weekend seminar on the “signs of the times.” I came out of that weekend sure that we were nearing a global collapse and then the battle of Armageddon. Although I had forgotten about it until I dove into this research, I now realize that this experience had stuck with me. 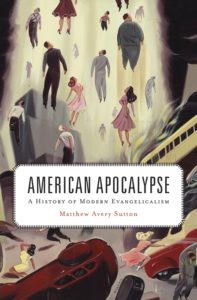 I was not terribly interested in defining religion or the sacred. My focus was on how what my subjects would define as their religious beliefs and convictions functioned. I focused on the work that their religion did. At the core of the book, I tried to answer the question: if a person or group of people believes that we are rapidly descending towards an apocalypse, how does that affect the way they live? How they engage with their family? How they understand global events? How they vote? How they spend their money, etc.? I argue that adherents’ conviction that time was running out so shaped the ways in which they understood their lives and their world, so influenced their character and actions, and so defined the ways in which they lived and practiced their religion, that it became an identity-forming norm of religious orthodoxy as well as the most distinguishing characteristic of the movement that they eventually dubbed “fundamentalism.”

First, I was trying to explain what shaped the way fundamentalists lived, what made them distinct, what set them apart from their more theologically liberal counterparts. The conclusion I came to was that their conviction that the world was growing much more irredeemably evil and that the Second Coming of Jesus was imminent made them who they were.

Second, I was trying to dispel the age-old myth that apocalypticism fosters apathy or indifference. Fundamentalists constantly asserted that Christ had called them to “occupy” the earth until he returns by exercising influence in all areas of life. And occupy they have. Fundamentalists’ apocalyptic sensibilities instilled in them a sense of determination that demanded constant action. They believed that they had to wield their influence and power as effectively as possible to prepare the world for the end of days. Jesus was coming soon to separate the sheep from the goats, and they wanted to be ready.

They also recognized that obedience had its benefits. No matter how dire the circumstances, no matter what challenges they faced, they were certain that they would ultimately prevail. When events worked out as they hoped, they claimed that God had rewarded their faithfulness and their efforts to bring revival. When conditions aligned against them, they trusted that God was moving the world closer to its end. Either way, the Bible’s prophecies were coming true and victory was theirs. While they might lose a battle here or there, they were going to gain the world. It’s a classic win-win scenario.

Finally, I was also hoping to contribute to a larger discussion about (re)defining fundamentalism. Along with Timothy Gloege’s Guaranteed Pure and Brendan Pietsch’s Dispensational Modernism, I am calling for us to rethink the established historiography on this movement.

There were many. On a historiographical level, my work explicitly tried to resurrect some of the ideas of Ernest Sandeen, who worked on fundamentalism in the late 1960s and early 1970s. In terms of style, I do my best to mimic Grant Wacker’s beautiful and engaging prose. And like Fredrik Logevall and Michael Kazin, I try to make my work relevant to real-world issues and a general (not just academic) audience.

Researching and writing the book actually went pretty smoothly. There are always those moments of panic when some sources do not reveal what you had hoped, or when you realize that you are spending limited research funds chasing ghosts, but overall the process was a good one. I love researching and writing.

I worked really hard in writing Aimee Semple McPherson to be as even-handed as possible. I really hoped pentecostals would read that book and see themselves fairly represented. But many did not like it, and my book is still not for sale in McPherson’s denominational bookstore.

On Apocalypse, I said screw it. I decided to write what I wanted and not to try to hide my voice. If I think J. Howard Pew was a scoundrel (and I do), and that comes across in the text, so be it. And to my surprise, the book has garnered mostly (though not entirely) positive reviews on evangelical blogs and in evangelical journals.

The other surprise was the reception of the book in Europe. The book has been widely and well reviewed in places ranging from the London Sunday Times to magazines in Norway and Sweden.

I am well into the next project. I am writing a book tentatively entitled FDR’s Army of Faith: Religion and Espionage in World War II, which I am publishing with Basic Books. This project looks at the roles that missionaries and religious activists played in espionage and covert operations during the war. I argue that their actions facilitated the rise of a new American religious nationalism ostensibly grounded in the championing of global freedom of religion, which political and religious leaders used to justify significant aspects of U.S. intelligence and foreign policy for the rest of the century.

Matthew Avery Sutton is Edward R. Meyer Distinguished Professor of History at Washington State University. He is the author of Aimee Semple McPherson and the Resurrection of Christian America (Harvard University Press, 2007), which won the Thomas J. Wilson Memorial Prize from Harvard University Press. He has also written a textbook, entitled Jerry Falwell and the Rise of the Religious Right: A Brief History with Documents (Bedford/St. Martin’s, 2012), and co-edited Faith in the New Millennium: The Future of American Religion and Politics (Oxford University Press, 2016). He can be followed @Matt_A_Sutton.