Bodies Down, Bible Aloft: A Humanist Take on Scripture and Trump’s Photo Op

On June 1, 2020, Donald Trump stood in front of St. John’s Church, looking stern, and awkwardly holding a Bible in his right hand: Think of what was done to make that photo possible. Peaceful protesters knocked around, violently pushed out of a park—in order to allow Trump to perform what he understood as an act of spiritual-political strength, but what is better recognized as a mockery of fundamental principles of decency in order to safeguard a fragile ego and warped sense of “order.” Trump’s photo presents the Bible as a type of talisman meant to tame and turn back critique of his disastrous response to protest against anti-black racism. Perhaps Trump has opened the Bible at some point and read, and perhaps he hasn’t—which seems more likely in light of his poor response to basic questions. Yet, the issue is bigger than Trump’s reading habits.

Bodies were brutalized and in the wake of that subduing Trump held high a text upon which many ground their sense of moral and ethical obligation. It, the Bible, is for them a profound symbol of justice—a marker of human connection and potentiality. Yet, it has also served to safeguard injustice—think of its application to sanction enslavement, segregation, and ongoing violent disregard. Even mindful of this history, for many Trump’s claiming of scripture for political power—whether one believes the Bible to have profound significance or one understands (even if one opposes) its symbolic impact—seems haunting in this moment saturated with new and graphic examples of anti-black violence and death.

Some read biblical stories as speaking, through human language and imagination, to the workings of divine forces in human history—God expressed through the limits of human communication. Still others argue the stories are metaphorical, figurative statements meant to simply present moral and ethical principles. I should say that I, as a secular humanist, don’t read scripture for “Truth” content.  That is, I don’t read biblical stories with any sense they represent historical events that are empirically verifiable—or that they are provided to us by a divine force, and therefore holding special status; nor, that their moral and ethical precepts presented metaphorically are somehow special, holding unique metaphysical merit, or better presented then in literature with less grand claims to inspiration and authority. I don’t hold to the religious commitments entailed by and advocated through these biblical stories, instead I believe them to be narratives meant to impart life lessons—not always positive lessons. At times these lessons should read as experience by negation: how not to behave. Biblical texts, then, are a deeply imaginative means of mapping through cartographies of ‘life wonder.’ I say this not as a biblical studies scholar who reads scripture using the tools of biblical studies, but as a secular humanist by commitment and a secular theologian by training concerned with the nature and meaning of black life and death.

My goal in making this argument isn’t to protect the Bible (or the religious worlds it informs), but rather to celebrate the marginalized, to recognize the disregarded who Trump has attempted to subdue—and to point out how, even for a secular humanist, the Bible as a literary work might offer something.

Biblical stories require digging – pushing beyond popular takes on key biblical verses and figures. Here’s an example of what I mean: Often scripture is read assuming a certain sensibility meant to safeguard tradition, advance the interests of those selected as having special status.  Some might argue this is a fundamentalist read of the Bible. I would respond many liberal religionists read scripture from the perspective of the “favored” who represent narratives of life that often work through exclusion. Such, for instance, is the unchallenged assumption justifying the tendency to not read the Bible’s story of community development from the perspective of those on the margins who aren’t favored, who aren’t the central actors within the unfolding drama—those who, in a sense, are pushed out to make room. What lessons emerge when the Bible is read privileging the margins of life where the voiceless are found? To start, what makes these stories important (or what some might call sacred) would be tied to the way in which they have an enduring relationship to the moral and ethical questions that position and describe an encounter with the world using a grammar of the despised. Scholars like Drs. Delores Williams, Wilda Gafney, Nyasha Junior, Renita Weems, among others have done precisely this sort of important work, and here I offer a secular “amen.”

If I hear these scholars correctly, I agree that if the Bible is to maintain any relevance, a reading of the Bible against the Bible is required—that is to say a poetic turn that dismantles and deconstructs, that renders uncomfortable those tied to restrictive codes of being and well being. And in this way, a reading that offers an opportunity to learn from those who have been ignored by the dominant readings that make possible Trump holding aloft a Bible as vulnerable bodies are brutalized. That is to say, vital lessons are often hidden in the corners of scripture and with despised or forgotten figures, those typically silenced in favor of the structures and representatives of power. For example, there is Job’s wife (Job 2:9-10).

Job has received a fair amount of attention in popular and academic materials. However, often missing from sustained consideration is Job’s wife and her suggestion regarding his predicament:  “…curse God and die.” It is important to remember, Job doesn’t suffer alone in this story: her children are killed and all the misery chronicled impacts her, although readers aren’t encouraged to recognize her suffering. She is nameless, labeled foolish, and left virtually ignored—the marginalized of the marginalized. Readers of Job, when they don’t move quickly to the end of the account at which time Job is given more than he initially lost (a rather low statement concerning the value of life), tend to wrestle with theodicy and the inability to understand the actions of God in relationship to human logic. Others critique the assumptions of wrongdoing motivating his friends’ challenge to Job’s faithfulness. Typically, little is said of Job’s wife. These approaches, from my vantage point, fall victim to a decreased concern for the significance of life and the markers of justice. In a way, she surrenders doctrine and creeds—the traditional markers of religiosity and commitment—and dismisses vertical relationship for the sake of horizontal connections between living beings:  making central the reality of those who suffer. Job’s wife is the only one in the story with integrity, with a sense of protest’s meaning—the type of integrity recent protests over anti-black racism and police brutality are meant to demand. 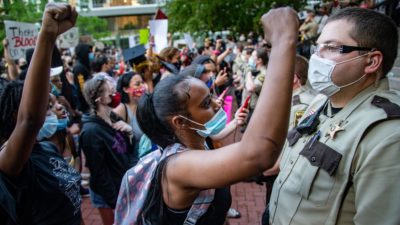 What we get with Job’s wife—the unnamed woman in the story—is the significance, the importance of speaking against power and finding in that “No” something of value—a marker of our significance, our rightful demand to have our occupation of time and space respected and safeguarded. In speaking “No,” in the posture of defiance, there is something of our dignity.  It may not result in victory in a traditional sense, but it enlivens connection and responsibility to those who suffer racial injustice and seeks to ground a purposeful and justice driven occupation of time and space, despite all.

Her demand to recognize the value of life over against the demands of systems disregarding the suffering of the vulnerable speaks to this moment, to current efforts to undercut structures of violence.  Job’s wife poses the question: What is one willing to give up (or tear down) in order to maintain the integrity of one’s basic commitment to justice—to the call for justice when larger forces threaten demise?