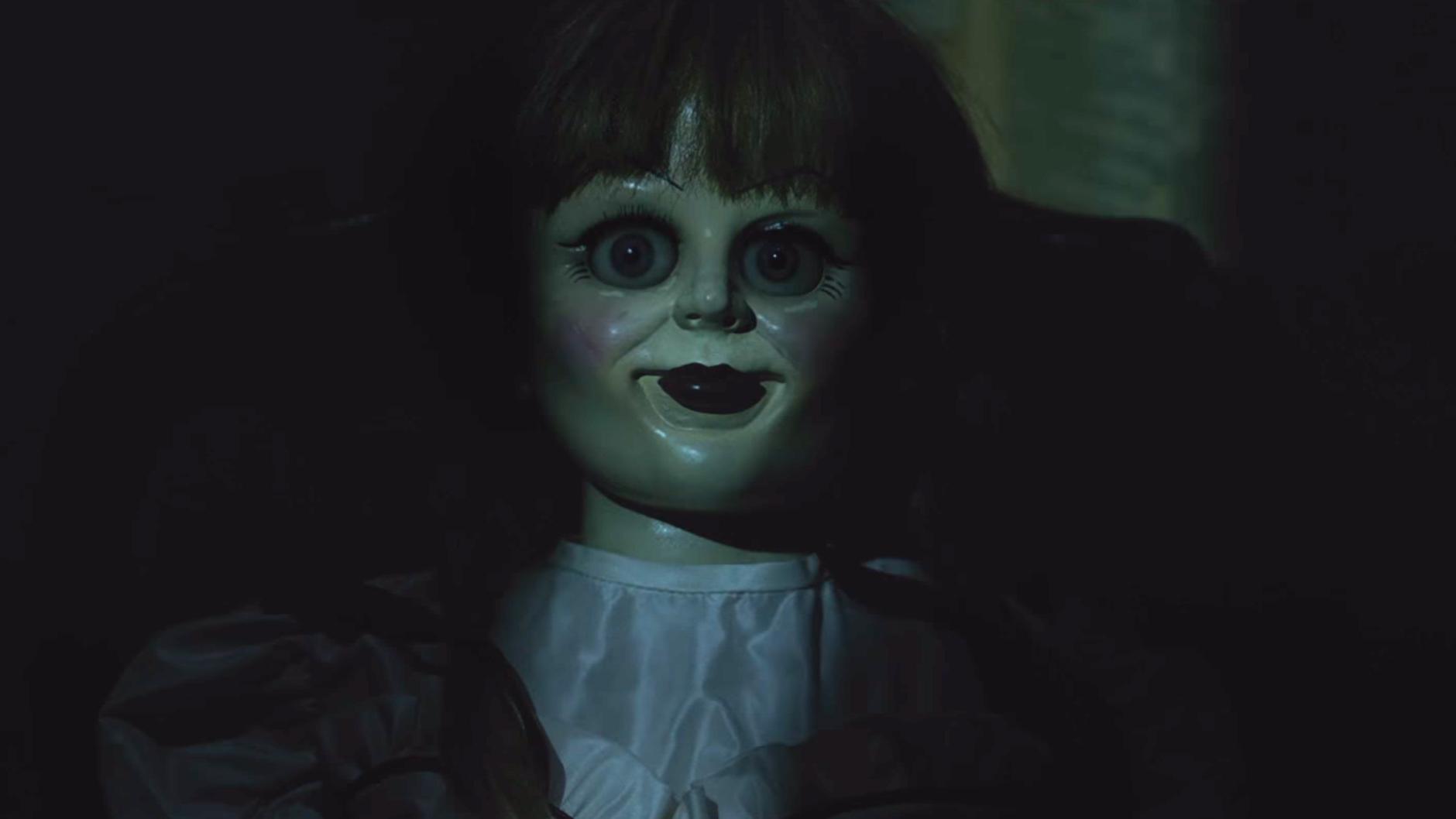 SPOILER ALERT: This article contains spoilers, so beware if you haven’t seen the film.

Last weekend Annabelle: Creation roused awake a slumbering late-summer box office by scaring up $35 million dollars and making moviegoers stand at attention for the latest in the creepy doll franchise. Creation traces the origin story of Annabelle, the demon-possessed doll that is the star of the franchise which started in 2014. It begins with the Mullins, a picturesque family of a doll-making father Samuel (Anthony LaPaglia), a homemaking mother Esther (Miranda Otto), and an only child Bee (Samara Lee) who loves to play hide and seek and has a stereotypical obligatory preoccupation with dolls. They are picturesque in the way horror movies cinematically portray nuclear families as WASP-y dwelling in quaint to large houses with a faint trace of religious belief undergirding the family. Within the first 10 minutes of the film we see the Mullins exit a church, later on we see the father carving a cross–seemingly in response to the malevolent spirit that has consumed their house, and in a flashback the mother holds up a cross and a Bible at the sight of her deceased daughter. Religiosity in the film is also bolstered by references to prayer, the presence of crucifixes, and Catholic priests sprinkling holy water on Annabelle before locking her away. All of this plays a role in, what I speculate, is a key to a creation story about Catholic secret keeping. But before we reveal secrets, we must endure tragedy.

Bee Mullins’s life is cut short when she is hit by a car and we are left with a fleeting memory of her. At this point the audience knew Bee to be playful, happy and vibrant with no sign of neglect, abuse, mental illness, or any other trouble that would explain what the movie unpacks in 1 hour and 49 minutes. Yet with Bee’s death, 12 years passage, and the arrival of a nun and six orphans at the Mullins house, we become privy not only to unresolved grief but also a restless and wanting spirit that has been growing in Bee’s absence. Enter Annabelle.

Annabelle is who we have all been waiting for and when she shows up she doesn’t disappoint. She is still as creepy as she was the first time we saw her in 2014 except this time, because this is about her creation, her glassy stare points us to someone or something else. She appears to us behind a locked door that Janice (Talitha Bateman), one of the orphans, manages to get a key to. Once this door is opened, Annabelle is set free to wreak havoc through parlor tricks, mind games and, ultimately, bodily inhabitation of the much too curious and crippled orphan Janice.

As Annabelle’s reign of terror sets on the Mullins house, slowly stealing the peace of mind of the orphans, father Samuel walks around with steely reserve while his wife is locked away in their bedroom on permanent bed rest. It doesn’t occur to viewers that the Mullins could be the authors of the terror which has beset the house but we soon find out the full story. We discover that after Bee’s death, the Mullins pray to see her again. Their prayers are answered and initially all seems well as they catch glimpses of their long-lost Bee playing in the hallways and having tea with her dolls. But Bee raises the stakes asking to inhabit the body of a doll so that she can be with her family forever. The Mullins agreed to these terms and Bee occupies the body of the doll who becomes Annabelle—unfortunately the Mullins would soon find out that “Bee” stands more for Beelzebub than Annabelle. Once they realized this the movie shows them, in a flashback, calling on the help of a Catholic priest—cue obligatory horror movie move—who allegedly metes of the malevolent spirit by exorcising the doll, splashing holy water on it and locking it away in a closet with a door covered in pages from the Bible—most notably pages from Lamentations. This act was supposed to cast the demon out of Annabelle but what we find in the film is that it only, temporarily, displaces the spirit until another appointed time. That appointed time being when new, pure and innocent people enter the Mullins home. And herein lies my idea of a Catholic secret keeping creation story.

As I watched the aforementioned flashback I was struck by how the adequate response to a malevolent being was to hide it and not destroy it. It reminded me that, in general, evil is so often locked away behind symbolic doors instead of completely destroyed at its root, and because of this it always has a chance to rise again and do harm. Particular to my speculation here on Catholic secret keeping, locking Annabelle away reminded me of one of the ways in which the Catholic Church keeps secrets and that is in how it “locks” priests away who are guilty of sexual abuse only to have them repeat those same offenses again. Like the priest displacing Annabelle as a solution, the church leadership’s response to priests guilty of sexual abuse is to displace them to another congregation—a kind of closet—where their evil deeds are not known. Some priests don’t offend again, while others lie dormant until they find someone who is pure and blameless through which to carry out their evil deeds again. They do this until they get caught and then the system of displaced priests grows ever larger as does the number of people wounded by the priests indiscretion. All of this because evil is not destroyed at its root. Annabelle gets to live on and Catholic priests get to maintain their priestly office because evil, at its root, is not destroyed. Is art imitating life?

Though Annabelle: Creation is not a movie about the abuses of Catholic priests, it is one about the consequence of keeping secrets and anyone with a bit of knowledge of the Catholic Church knows that it has its fair share of secrets–even something called a Secret Archive although it is not an archive of deleterious secrets. Annabelle: Creation shows how keeping secrets about the presence of evil by hiding it produces evil. The evil of Annabelle is generative and reproductive so much so that shallow attempts at destroying it and then hiding it cannot completely snuff it out. Similarly the evil that is Catholic priests committing sexual violence and the way in which it is kept secret–and kept in place–produces more evil. In the art of Annabelle: Creation and in life, there is a mode of secret keeping about the power of evil that shows that, when evil is not tackled at its root, it will persist. I acknowledge that some may see this as a stretch but I dare to offer this reading that parallels the secret keeping of Annabelle with the Catholic Church’s propensity to keep secrets to offer a way forward.

I say all of this not to suggest that Catholic priests guilty of sexual abuse should be physically destroyed the way I believe Annabelle should have been destroyed. Instead I am suggesting that the solution is not displacing evil but destroying it at its root. Destroying Annabelle means burning her to a crisp and then burning her again and then setting watchmen around the home. Destroying priests guilty of sexual abuse means not displacing them to another parish but removing them from the priesthood indefinitely and placing them around watchmen and women who will attend to the root causes of their propensity to sexual violence. These watchmen and women will not view ritual practices such as exorcism, prayer, or the sprinkling of holy water as sufficient to destroy malevolent spirits on their own, but will labor in the natural world as well as the supernatural to ensure that evil does not persist and life does not provide a ground for art to imitate.

Nicole Symmonds is Senior Editor of  Sacred Matters and a PhD student in Ethics & Society at Emory University. Her research interests are virtue ethics, sexuality and culture, and ethnography. Her website can be accessed here and she can be followed at @nicolesymmonds.