In our interview series, “Seven Questions,” we ask some very smart people about what inspires them and how their latest work enhances our understanding of the sacred in cultural life. For this segment, we solicited responses from Troy Tomlin, author of A Divinity for All Persuasions: Almanacs and Early American Religious Life (Oxford University Press, 2014). 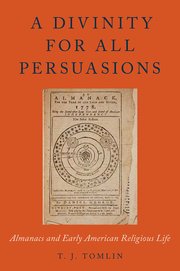 I wanted to know how a serious investigation of popular culture could inform the study of religious life in British North America and the early United States between 1730 and 1820. These years witnessed a remarkable shift in American religion as groups like the Methodists and Baptists challenged older, established churches for numerical and cultural supremacy. Historians have debated why this shift took place and whether, for example, the newer movements offered a liberating, leveling, and empowering alternative to prevailing religious norms or a novel, “Americanized” means of reinforcing racism and patriarchy. I was curious about what popular culture might add to these debates, if only an affirmation of one of the pre-existing frameworks.

After tinkering with chapbooks, inspired by a few notable works on religion and popular culture in France and England, I realized that almanacs were the source I was looking for. Almanacs were calendars surrounded by and filled with a wide assortment of information ranging from the cycles of the moon and medical advice to court dates, poetry, and humor. They were the one book other than the Bible almost everyone read or heard read aloud. Although American almanacs borrowed their structure and format from Europe and most especially England, they became a fundamental component of early American popular culture. Some of the almanac’s material had to be specialized to meet local circumstances (sunrises and court dates, for example). So this was not just a mimetic transatlantic importation. They were compiled by American producers who knew their consumers’ tastes. Their sales figures are still enviable. New England’s leading almanac-maker, Nathaniel Ames, sold some 60,000 almanacs a year. I wondered what these little books could tell me about wider patterns and disruptions in early American religion and, most importantly, what ordinary men and women may have thought about them.

There’s a deep irony here in that I began this project interested in what almanacs could tell me about changes in institutional religious life, especially within Protestant churches. Instead, almanacs promoted a version of religion that did not require churches or the ministers who led them. As a genre deeply attuned to the cyclical patterns of life and death in the natural world and their readers’ inevitable participation in this process, almanacs proclaimed “a life well-lived” as the surest mark of authentic religion. Doing good defined true religion. This notion was influenced by and aligned neatly with early modern natural philosophy (observation/evidence/proof), at the same time, it remained markedly Protestant. English Latitudinarianism, which aimed to set aside divisive doctrinal specifics in favor of shared Protestant “essentials,” was another crucial influence. Almanacs proclaimed the Bible and a Trinitarian God as creator and judge. Sometimes almanacs extended this definition of true religion to include every other non-Protestant tradition. So the Muslim who lived a good life would be assessed by the same divine standard and receive his or her reward in the afterlife. In a real sense, the strand of religious discourse at the center of early American popular culture defined “golden rule” morality (irrespective of every other religious difference) as the most sacred human obligation.

First, I hope readers consider and weigh the book’s core argument that early American religious life is best defined by the pan-Protestant sensibility articulated in its most ubiquitous popular genre. Even if they disagree, I hope they will be convinced that pan-Protestantism was a crucial part of religious life in British North America and the early United States.

Second, I hope the book offers additional evidence for how integrated “religion” was with every other aspect of life and death in early America. Doug Winiarski’s recent book, Darkness Falls on the Land of Light: Experiencing Religious Awakenings in Eighteenth-Century New England, is a brilliant example of this point, even for those who remained within established Congregational churches. Lauren Winner’s A Cheerful and Comfortable Faith offers a similar model for elites in the eighteenth-century South. Albert Raboteau, Jon Sensbach, Heather Kopelson and others have uncovered this same dynamic among African-Americans and Afro-Caribbeans in the Atlantic World. In short, I am convinced that early American communities wove religion into their lives in all kinds of fascinating and unexpected ways.

Third, I hope the book stirs interest in and fosters further work using American almanacs. I’ve scratched one part of the surface in this book, but there is so much more to be done. I can easily imagine innovative insights into religion and agriculture, region, race, science, and gender arising from future studies centered on almanacs.

David D. Hall’s Worlds of Wonder, Days of Judgment: Popular Religious Belief in Early New England provided an inspiration and a model for integrating popular culture into a close study of early American religious life. Because of Hall, I read Peter Burke’s monumental, Popular Culture in Early Modern Europe, Carlo Ginzburg’s The Cheese and the Worms, and Margaret Spufford’s Small Books and Pleasant Histories: Popular Fiction and Its Readership in Seventeenth-Century England. Cathy Davidson’s Revolution and the Word: The Rise of the Novel in America offered a clear example of how one genre could link up with and shed light on an entire period. Finally, Sarah Rivett’s The Science of the Soul in Colonial New England revealed deep connections between natural philosophy and religion I would not have seen.

Reader annotations were difficult to work through. For the most part, people did not write what I wanted them to write—their deepest religious insights or reflections on an almanac’s content. Almanacs were often used as diaries, but it took a lot of flipping through a lot of almanacs to move from “Bled pigs” or the scribbling of one’s name three times to the kinds of annotations I could actually use.

Doug Winiarski called the book a “timely meditation” in his William and Mary Quarterly review. In the wake of the bitterly divisive 2016 presidential election, he sees my book as a much-needed example of how religion can move people toward an inclusive recognition of their similarities. I had never thought of it quite this way, but I think he is right.

I am working on a second book, tentatively titled God’s Uncertain World: Chance in Early America. I want to write a cultural history of causality. It will examine lotteries, gaming, casting lots, and accidents as a way of gauging how people explained why things happened in the eighteenth and early nineteenth centuries.

Troy Tomlin is an Associate Professor of History at the University of Northern Colorado where he specializes in early American religious and cultural history. He has received fellowships from the American Antiquarian Society, the Virginia Historical Society, the Library Company of Philadelphia, and the Historical Society of Pennsylvania. In spring 2017 he was the National Endowment for the Humanities Distinguished Visiting Professor at the University of Richmond.