Living with a Zombie Apocalypse: 7 Questions for Greg Garrett 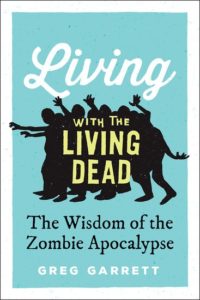 In our interview series, “Seven Questions,” we ask some very smart people about what inspires them and how their latest work enhances our understanding of the sacred in cultural life. For this segment, we solicited responses from Greg Garrett, author of Living with the Living Dead (Oxford University Press, 2017).

Living with the Living Dead grew out of my work for Oxford University Press on Entertaining Judgment: The Afterlife in Popular Imagination. The chapter in that work about the undead was at 100 pages and growing, and it became clear that there was way too much—and way too interesting—information to fit in the original book. So Living with the Living Dead is a sort of sequel to that book on the afterlife. Entertaining Judgment II: The Dead Walk.

It was also, though, shaped by conversations with audience members in talks I gave on that research in Cambridge and in Paris, who independently asked me about both the mammoth popularity of zombie narratives and about Alain de Botton’s book Religion for Atheists. “Do you think,” both people asked, “some people are using these stories about zombies as a sort of wisdom tradition?”

“Of course,” I told them. Much of my work on religion and culture has been on the sorts of stories people cling to, why they need them, and how they use them to make sense of the world, the cosmos, and themselves. With that particular filter in mind–what is the wisdom of the zombie apocalypse?—the book was set, and all I had to do was watch, read, do research, and write!

As a cultural theologian—someone who explores cultural narratives seeking sacred meaning, I am very interested in myth, the stories we tell in every age to explain things, and in received wisdom traditions. I’m often comparing narratives from secular and sacred traditions, or using wisdom traditions as an additional interpretive filter. Ultimately, I want readers to go on a journey of faith as well as exercising their emotions and minds. Because I was trained as a Christian theologian and that’s my tradition, I do tend to look for the analogies between the work I’m examining and the Christian tradition, and I know my work is often used in churches and in seminaries. But I don’t write to proselytize, and I try to be sensitive and grateful for the wisdom of other traditions. In Living with the Living Dead, I am writing as a Christian, but finding value in the teachings of other faiths as well.

The sacred entered into this book in powerful ways, but my favorite moment comes in the final chapter in the book, which basically asks, “Is a zombie apocalypse a bad thing or a good thing?” Some zombie stories end with universal oblivion. Entropy. Others illustrate what J.R.R. Tolkien called “eucatastrophe,” the good disaster. I was drawn to the repeated phrase “Light up the darkness” from I Am Legend, and to two phrases from the 14th century Christian mystic Julian of Norwich. Her “All shall be well” notion is familiar to many, and does apply nicely to the end of the world. But I was reminded of another and, for me, even more powerful phrase: “You will not be overcome.” I’m convinced that one way to read the zombie narrative is a comfort even in our own difficult and complicated era when it looks like the world may be ending. All will be well. We will not be overcome. That is a sacred promise.

First, the zombie apocalypse story is so pervasive in the 21st century because it serves essential needs, and zombies can stand in for a number of menaces, everything from terrorists to pandemics to political and economic chaos. These stories are useful for us in real life and not just as escapist tales.

Second, zombie stories focus us on the dangers of but also the necessity of human community. To survive, people are called into groups where they pool their resources and strengths and become sources of comfort for each other. The stories of the zombie apocalypse are powerful reminders that we need each other to become the persons we are called to be.

Third, a writer and producer of The Walking Dead reminded me during the writing of the book that it’s the people, not the zombies, that matter, and their behavior and drive to survive offers us a vital chance to ask important questions about how we live in a dangerous world. What is the good life? What decisions are good and which are evil, even in the face of ruin?

I was particularly grateful for Alain de Botton’s Religion for Atheists, which confirmed for me as a person of faith that all people need community, ritual, an ethical framework, and a sense that we are called to give what we have and who we are for something more important than ourselves. De Botton offered me a powerful reminder that everyone is trying to make meaning, and stories that have a huge cultural currency must matter more for some reason! I was also grateful for the musings of zombie writers Angela Kang, Mark Protosevich, Max Brooks, George Romero, and Robert Kirkman, who talked with intelligence about how the stories they created work and what they communicate. Finally, I’m always thankful for the example and influence of Augustine, who saw sacred value in the artistic works of human beings, and who believed that things that are true and beautiful have the power to guide us toward the Divine. I found many things that were true and beautiful in these works colored by death and destruction, and I believe I’m a better person—and a more faithful one—for making this journey.

The most difficult thing about writing the book, strangely enough, was the subject matter. I knew what I was getting into right? Zombies! But many of the texts that I was analyzing (The Walking Dead comics and TV show, 28 Days Later, The Road, George Romero’s zombie films, and others) were so full of gore and violence (and even zombie comedies like Zombieland and Sean of the Dead had difficult scenes), that I often felt emotionally and maybe even spiritually rattled. I’ve told people who writing this book was taking a bullet for the tribe, and that’s sort of what it still feels like.

The other unexpected challenge was simply communicating to some skeptics why a serious writer would take a couple of years out of his life to write a book about zombies. I’m more convinced than ever that this is a topic worth close study, and that this book is a notable contribution to our thinking about the zombie narrative. Some people were excited beyond belief that I was turning my attention to the zombie apocalypse. But that negativity from others was a hurdle I sometimes had to clear, an almost-apology to get to the point of saying “This will be worth your time, as it was worth mine.”

I was grateful that some of the people whose work I cover in the book were interested in the book and even offered encouragement for it. Mark Protosevich, for example, who wrote the Will Smith I Am Legend not only sat for several interviews with me but read and praised the final book. Maybe this shouldn’t be unexpected, but considering that some people needed to be sold on the topic, it is a little surprising that this book may have the greatest popular currency of any nonfiction book I’ve written. People are mad about zombies!

I’m working on a novel (I jump back and forth between fiction and nonfiction) and just sent my publisher (Oxford University Press) a proposal for a book that I think is sadly current and sadly necessary, a book exploring American film, race, and reconciliation. I’m helping the National Cathedral in Washington DC plan a program to honor Martin Luther King around this topic. We’ll sponsor conversation, film screenings, and other events in the spring of 2018, and I’ll listen carefully to what goes on, since I’ll be writing the race and film book then. And I’m, as ever, doing a lot of speaking, teaching, and traveling around Living with the Living Dead and the other books I’ve written. I’ll be in the UK and France this summer, and speak at some major literary festival overseas in late summer.

Greg Garrett is Professor of English at Baylor University in Waco, Texas and the author or co-author of twenty books, including Entertaining Judgment: The Afterlife in Popular Imagination from Oxford University Press, the novel The Prodigal, and Faithful Citizenship.