In our interview series, “Seven Questions,” we ask some very smart people about what inspires them and how their latest work enhances our understanding of the sacred in cultural life. For this segment, we solicited responses from Jenna Weissman Joselit, author of Set in Stone: America’s Embrace of the Ten Commandments (Oxford University Press, 2017) 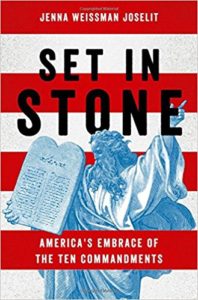 In 2005, groups of casually-attired Americans gathered outside the United States Supreme Court brandishing miniaturized, papier-mâché  versions of the Ten Commandments. Something about the scene caught my eye as well as my fancy, but it wasn’t until a year or so later when I stumbled across a reference to a 5,280 pound version of the Ten Commandments being taken on the road and “into the light of day” that I had my “aha moment.” I got to thinking about the movement of the Ten Commandments, their circulation through time and space, and before long, I realized there was a story, or a series of stories, to be told. When I started out, I didn’t quite know how the narrative might unfold, but I was excited by the prospect of trying my hand at story-telling and of contemplating the Ten Commandments as text, object, and prop.

As I was soon to discover, the Ten Commandments turned out to be the most richly imagined, and frequently invoked, of all Biblical texts in the United States. Its imprint on American daily life ran deep, going well beyond the traditional confines of religion, or, the sacred, for that matter. Ever since the late 19th century, Americans made a point of depositing stone, paper, cardboard, stained glass and Technicolor versions of the divine dos and don’ts all over the place: in houses of worship and private homes, on the street, in school, in the subway and even on the interstate. Dainty, spun-sugar versions graced bar mitzvah cakes, while their metallic counterparts dangled from women’s charm bracelets or took the form of bumper stickers. Depictions of the Ten Commandments not only became more frequent and insistent throughout the course of the 20th century; they became much larger, too. In postwar America, monumental depictions of the Ten Commandments increasingly graced the public square as well as the exteriors of suburban synagogues. The challenge of the book is to account for the appeal and staying power of the biblical text as well as the manifold ways in which it secularized well in America.

I would like my readers, especially the academic professionals among them, to recognize the vitality and interpretive utility of things as primary sources. Our critical vocabulary would be enormously enhanced were scholars of religion and of history to engage more fully and systematically with material culture.

I hope my readers come away with a heightened understanding of how America’s embrace of the Ten Commandments underscores the porousness of the divide between religious and cultural expression.

If they put down Set in Stone recognizing that the stalwart, enduring presence of the Ten Commandments within every nook and cranny of American daily life renders the United States singular, that, too, would be most welcome. No other country made, or continues to make, as much of them as America does. As one of the Decalogue’s champions put it, Americans “have no civilization, no form, no character, no distinctiveness” without it.

In working through the issues my sources presented, I read widely in a number of areas, from art history to legal history and from archaeology to country music. As luck would have it, two rather distinctive books – one on the senses and the other on the properties of stone – were published while I was writing away. The first title was Sally Promey’s Sensational Religion: Sensory Cultures in Material Practice (Yale University Press, 2014), which furnished me with both the creative license as well as the interpretive tools to think imaginatively about faith, ritual and religious practice. The second title was that of Jeffrey J. Cohen’s Stone: An Ecology of the Inhuman (University of Minnesota Press, 2015), which encouraged me to think of the two stone tablets as an active rather than an inert presence. 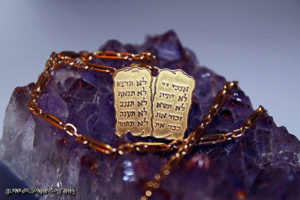 Without a doubt, the most daunting aspect of this project was the volume of extant material. For historians like me who are accustomed to trafficking in traces, being confronted with a voluminous array of sources – biblical exegesis, homiletical literature, court transcripts, paintings, stained-glass windows, comic books and cartoons, music, film, jewelry – was a gift, at least at first. It didn’t take me too long before I recognized that having to make my way through all this stuff was a mixed blessing. Much like the ancient Israelites, I spent years wandering about, trying to discern a pattern, an argument, a claim about these biblical passages and their tenacious hold on the American imagination.

Frequently, I would encounter the raised eyebrow that questioned whether anything could be said about the extra-Biblical life of the Ten Commandments. People had a hard time conceptualizing these prescriptions as something other than sacred writ. To them, the Ten Commandments were set in stone. That response disappointed me, but I understand from whence it came. After all, my bookshelves and yours too, I suspect, sag under the weight of accumulated religious wisdom. When it comes to the ancient biblical code, could there possibly be anything new under the sun? I think the answer is a resounding ‘’yes.’’

A couple of possibilities lie ahead, the most tempting – and challenging – of which relates to an early 20th century scandal, a whodunit, at the Louvre whose cast of characters encompasses ancient Scythians and latter-day forgers, curators, politicians and museum-goers. It promises to be quite the yarn.

Jenna Weissman Joselit, the Charles E. Smith Professor of Judaic Studies & Professor of History at The George Washington University, directs two graduate programs in Jewish cultural arts, the first of their kind in the country. In addition to her just-published book, Set in Stone: America’s Embrace of the Ten Commandments, she is the author of Wonders of America, which received the National Jewish Book Award in History, A Parade of Faiths, and A Perfect Fit: Clothes, Character, and the Promise of America. A monthly columnist for Tablet, she can also be found at www.jennajoselit.com

PrevPreviousLiving Sustainably: An Excerpt
NextIslam and The Americas: 7 Questions for Aisha KhanNext