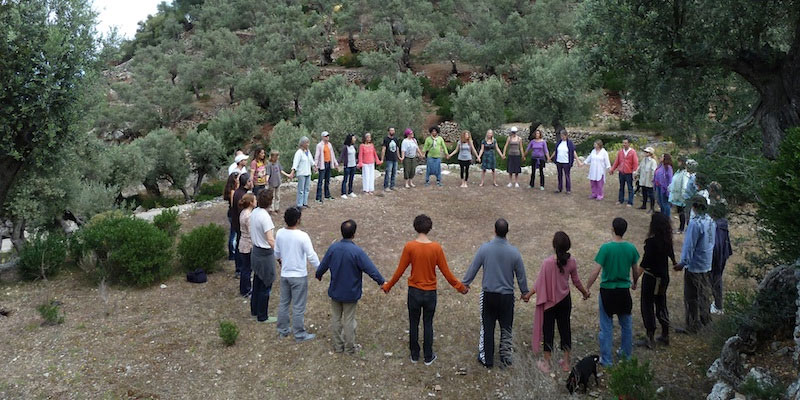 The following is an excerpt from Living Sustainably: What Intentional Communities Can Teach Us About Democracy, Simplicity, and Nonviolence by A. Whitney Sanford, published on April 18, 2017 by University Press of Kentucky. Copyright © A. Whitney Sanford, 2017.

“It’s creating a culture instead of fighting against systems we don’t agree with. It’s creating a new system and culture that we can live in and that works.”—Sarah Wilcox-Hughes, Possibility Alliance

For Living Sustainably, I visited intentional communities including ecovillages, Catholic worker houses and farms, and cohousing communities to see how they translated their values into practice. The residents of these communities experimented with creating new cultures based on nonviolence, self-sufficiency, equity, and voluntary simplicity. In other words, they sought to be the change they wanted to see in the world rather than simply complaining about the world they live in. Living out values requires trade-offs, and residents in the communities I visited had to decide how to interpret and enact their values in the context of their geographic, cultural, and religious frameworks. Several communities draw upon bread labor, a concept embraced by Tolstoy and popularized by Gandhi, to consider both how they produce their food and how this labor enacts a social and religious ethic.

Bread Labor for a New Millennium

Mark Becker [of the Possibility Alliance, La Plata, MO] and others who embrace bread labor and related values swim upstream against a culture that lionizes efficiency and our mass-produced, profit-driven consumer culture. Although the work is difficult, Becker is enhancing his farming skills and deepening his relations with nature and with others. More important for Becker, though, his bread labor gives him control—authorship—over his life and frees him from the constraints of mainstream society. His bread labor and voluntary simplicity are means to a vibrant life, not guilt-induced deprivation. Further, he is crafting his life both in a community setting and in engagement with the world outside his community; he is not isolated.

Residents of intentional communities perform bread labor, in part, to resist inequitable and exploitive economic systems, and they aim to create systems that are sustainable in terms of economy, equity, and ecology. Both Possibility Alliance and New Hope Catholic Worker near Dubuque, Iowa, draw upon the concepts of bread labor and the agronomic university to frame their practices. Eric Anglada brought Maurin’s plan to life in 2010 when he created Growing Roots at New Hope Catholic Worker farm, a twenty-eight-acre, four-family community farm. Although New Hope is not far from Dubuque, the steep narrow roads made the region seem remote; to call my husband, each morning and evening I climbed over a mile up the hill to gain cell phone access. Anglada writes that a group of Catholic workers met for a week and labored to “dig deeper into the intellectual, spiritual, and agrarian core of the Catholic worker—and explore its meaning today.”17

Each day we awoke at 6:30 a.m. to milk the cow, feed the chickens, take a walk, or pick berries, then came together at 8:00 a.m. to pray the Daily Office and eat breakfast. The next three hours were devoted to the “intellectual,” during which Michael Baxter and Sheila McCarthy, both from the Catholic worker house [South Bend Catholic Worker] in South Bend, Indiana, led us in discussions on various topics, including “The Intellectual Foundations of the Catholic Worker,” “Alasdair MacIntyre and Permaculture,” “Peter Maurin, Tradition, and Herbal Medicine,” and “The Integrating Visions of Hildegard of Bingen and Ade Bethune.” After lunch and a leisurely rest, we devoted another three hours to engaging creation and our bodies. The work was varied, ranging from splitting wood and weaving baskets to harvesting vegetables and identifying wild edibles in the woods. The close of the day found us around the bonfire, playing music and singing.18

In late spring 2012, I attended a weeklong permaculture class hosted by Anglada and New Hope that followed a similar structure. We camped in the area that doubled as our classroom. The class mixed discussions of permaculture principles with design exercises in which we considered how to use the land’s natural features to fulfill the farm’s goals. We learned that, according to permaculture principles, features should fulfill multiple goals, so we debated how the existing spring could function as a natural refrigerator and fishing hole, among other things. Several of my classmates had just returned from a Jesus Radicals gathering, and I learned about a group of self-described anarchists who are striving to live out Jesus’s gospel, a radical stance in today’s capitalist economy. During class discussions and in the evenings sitting around the fire, the Jesus Radicals and the Catholic workers taught this religious studies professor a great deal about compassion, open dialogue, and living the world you wish to see.

Adam Campbell of the Possibility Alliance, although not a Catholic worker himself, taught the course, and most of the other participants were affiliated with the contemporary Catholic worker movement. Anglada noted the current strength and growth of the movement, which had virtually been given its last rites in the 1980s, as explored by author Dan McKanan.19 Anglada and I discussed challenges facing bread labor and craft culture in our contemporary socioeconomic context.

There is good interest in the Catholic Worker Movement, but it is hard to view them as more than token gestures in a lot of ways. But in a lot of ways, everything we do is sort of a token gesture. Making candles and making soap are important, but it’s hard to envision economies built around those things. For the last several generations, capitalism has commodified everything we did to meet our own needs. We pay for services that we ourselves or a community or a village used to do ourselves. And so hand-dipped candles and making soap are novelties. We’re not pure or perfect and that’s not what we’re searching for. It’s just trying to have integrity about our daily lives. Food is the most direct and in many ways the easiest way to do that.

All the Catholic workers I spoke with emphasized the difficulty and slow pace of social change, but agreed that living their values sustained Peter Maurin and Dorothy Day’s vision. Anglada, though, acknowledged that slow change through living and demonstrating the change is part of Catholic worker spirituality. “Day’s favorite saint was Therese of Lisieux, a conservative, traditional young woman who you wouldn’t necessarily associate with Dorothy Day. Day was an anarchist, but Therese of Lisieux was all about the little way. We embrace the fact that we’re doing small actions and hoping that these actions add up to a bigger movement. It is a spiritual thing—we’re not going for a mass movement or some giant reform.”

Alice McGary of Mustard Seed articulated the movement’s goals and her rationale for acting on these principles. Mustard Seed is one of the smallest communities I visited, both in acreage (eleven acres) and number of participants (four to five residents). The acreage, near Ames, Iowa, sits on the edge of a larger farm, and although Mustard Seed did not own the land, McGary and her husband had built a small house there. Mustard Seed is well known in Ames and publishes a newsletter, the Catholic Worker Farmer, that reaches beyond Ames and Iowa. McGary said,

Solidarity with the poor, voluntary poverty, nonviolence, the works of mercy, hospitality, education about social justice, the land ethic that Peter Maurin taught, distributive economics and this idea of land and craft, and this model of doing work because you believe in it, not because you’re getting rewarded for it. We’re turning our economic models upside down by making that switch. It’s a foreign switch and hard to communicate and model to people, but it’s really important to me. This work is important and we want to do it, because it’s serving the greater good, and I have a passion about it. And I feel like it needs my soul, and I’m willing to do it not for pay. I’m choosing. I do not want to do it for pay.

Like Becker, she emphasized that the work is not drudgery, but service to others: “The work is also really important. Our work is a service to each other, and it’s not that I’m suffering through drudgery in order to get what I want. I do think that the actual physical work and the fruits of our labor are really vital to what we’re about.”

For Catholic workers and Possibility Alliance residents, the term bread labor evokes a legacy of thinkers including Gandhi, Tolstoy, Peter Maurin, and Dorothy Day. Bread labor is a service to others and a means of deepening community bonds. Whether community residents consciously use the term or not, for most, their work and participation in these communities, fulfilling essential needs, offers freedom from the emotional and social demands of mainstream society. Since they labor for themselves and their chosen communities, not corporations, universities, or governments, they perceive—as does the Valhalla Movement—that in performing the labor of self-sustenance, they own their lives.

Whitney Sanford  teaches and researches in Religion and Nature and Religions of Asia, and her current work lies at the intersection of religion, food (and agriculture), and social equity, focusing on South Asia.