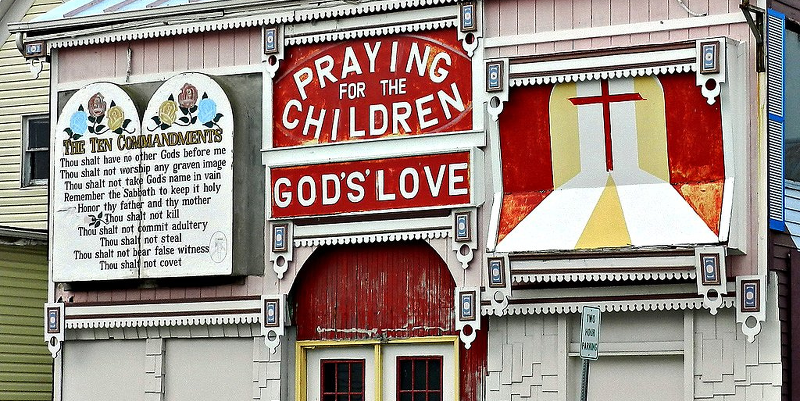 Maybe everyone is religious. Maybe sports fans who live or die each week with the fortunes of Manchester United or the Pittsburgh Steelers are as religious, in their own way, as earnest participants in churches, synagogues, mosques, and temples. And maybe the Americans who look on with outrage when some mob “desecrates” the flag are as devoted to a civil religion as the Pope is to the Catholic faith. But the 60 percent of Americans who say religion is “very important” to them and the 79 percent of Western Europeans who just can’t bring themselves to say that probably mean something more traditional. They probably mean that they believe—or don’t—in God; follow—or don’t—the Torah; cherish—or don’t—the Buddha; or devote themselves—or don’t—to the teachings of Mohammed the Prophet. In other words, most of them probably think conventionally about religion when someone asks if it is “very important” to them. But whether the question is about beliefs, practices, identity, the veneration of tradition, or some other familiar view of religion, most Americans answer it one way and most Western Europeans another. Let’s leave the Eastern Europeans out of view; they complicate matters. We are talking about Western Europe and the United States. That is more than enough.

Of course it is possible that neither Americans nor Western Europeans mean what they say. After all, some 40 percent of Americans have told the Gallup pollsters for half a century that they could have been found the previous week in some religious building doing something religious. A few enterprising sociologists have come up, however, with some imaginative ways of counting, and they conclude that the actual number is closer to 20 percent. A few equally enterprising scholars who study religion in Europe have argued that in some countries, people may practice more religion than they admit. The American sociologist Phil Zuckerman found that Danes and Swedes didn’t practice much, but Zuckerman also learned that one inebriated believer confessed to a friend over a round of drinks that he believed in God. “I hope,” he said, “that you don’t think I’m a bad person.” But this simply pushes the question one step further back. Why might some Americans feel obligated to exaggerate their religious practice and some Europeans to minimize theirs?

The prevailing view in some sociological circles is that the difference goes back to the separation of church and state. The First Amendment to the US Constitution—along with state laws and constitutions—produced a competitive religious marketplace in which scores of sects competed with one another while the stodgy Europeans stuck with their state churches, and everyone (in America) knows that the marketplace outperforms monopolies, especially state-supported monopolies. American competition meant that denominations multiplied, religious entrepreneurs flourished, immigrants imported traditions, uneducated clergy attracted uneducated followers, educated clergy attracted educated followers, and radio preachers and televangelists bought up the airwaves. Separation made possible the “democratization” of American religion—a style of religious life in which every conceivable religious inclination found its niche.

There’s obviously something to this, though colonial Americans in state establishments were about as religious as post-revolutionary generations, some American colonies offered a good number of religious options, and the majority of colonists probably “adhered” in some way to a Christian congregation. (Though historians have shared no consensus about what it meant to adhere.) True, American competition might be exaggerated. If you live in some Southern states, for example, the chances are high that you’re going to be a Baptist. The region is about as homogeneous, once you leave the cities, as Italy, though the Pentecostals threaten some trust-busting. If you dwell in Minnesota, on the other hand, you’re likely to shop at your local Lutheran or Catholic emporium.

Once upon a time, moreover, Europeans in lands with state churches were just about as religious—again, we’re talking about conventional criteria—as Americans shopping in the religious marketplace. Furthermore, a place like England, burdened or buoyed by an Anglican establishment, had about fifteen competing denominations by the mid-nineteenth century and even more after World War I. The competitors attracted about as many members as the Anglican establishment. This looks and sounds like a marketplace, but it did not produce a twenty-first century “religious England.” You can walk for blocks in some English cities without seeing a living, breathing practitioner of any Western religion. Far be it from me, however, simply to discard the marketplace hypothesis; it explains a degree of the difference, and that’s a start.

Since we are looking at trends that began in the eighteenth century, we might want to recall that the American states formed themselves as a nation during the Enlightenment—a period in which it sometimes seemed, at least to the orthodox, as if deists were to become as prominent as revivalist Christians. As a result, the clergy invested themselves in an extended polemic against deistic thought, arguing, among other things, that the deists provided an inadequate support for morality. If ever a theological argument took hold among a population, the association between religion and morality captured the American imagination. To this day, only a handful of politicians could hope to be elected to office if they did not let the voters know that they are religious—a requirement richly productive of unending irony. In Western Europe, voters seem not to see any necessary relation between morality and religious belief.

More than 80 percent of American adults call themselves Christians; more than a third of adult Americans claim to be “born-again.” Where do they get this language? It comes, of course, from the Gospel of John, and what most Americans mean by it an experience resulting in a deeply felt relationship to Jesus as their Savior. But that was not exactly what sixteenth-century Catholics or even the Protestant reformers Martin Luther and John Calvin meant by the words. The current American usage of the term comes from revivalist traditions, a point that makes it abundantly clear that revivalism is one source of American religiosity. Revivalist traditions also appeared in Europe and Great Britain among puritans, pietists, Wesleyans, and evangelicals, and in Catholic missions, but Europe also had strong counterweights: state churches, sacramental views of rebirth, influential university theologians who worried about revivalist excess, and cultural suspicions of “enthusiastic” religion. American revivalists were well-attuned to the individualist dimensions of American culture. European states were, and are, more “corporate” in their self-understanding. The difference is a matter of degree, but degrees make a difference.

Nor can one forget that America has been, since the first Native Americans wandered onto the continent, an immigrant nation. The country drew a constant accession of immigrants from Germany, France, Spain, Italy, England, Scotland, and Ireland, not to speak of Sweden, Norway, Finland, Russia, the Austro-Hungarian Empire, China, Mexico, and scores of other places. Of course, Europe had its own immigrants, sometimes motivated, at least in part, by religious desires. But America has received more immigrants than any other country. Between 1821 and 1934, thirty-three million Europeans alone came to the United States. Between 1965 and 1999, twenty million more immigrants arrived. Immigrants were not invariably religious, but the three institutions that immigrants brought with them were families, schools, and religious institutions.  And the religious institutions became not only places of worship but also of recreation, cultural preservation, social organization, and association, with people from the home country. Whatever the reasons, the multiple functions kept people close to churches, synagogues, temples, and mosques.

Before 1780, nearly 75 percent of the immigrants to America came in some condition of unfreedom: they were indentured servants, convicts, or slaves. Europe also had slaves and serfs, but for most of the eighteenth century almost half of all immigrants to America were enslaved Africans, and slavery altered Christianity. For one thing, it helped to produce a conservative white religious culture in the South. By the 1830s, the Southern planter class associated unorthodox thought with the northern movement to abolish slavery. Something of that amalgam of religion and white southern culture stuck. But the slaves themselves also helped make the South the most religious section of the United States. After 1750 the revivalists reached out to the slaves, who eventually formed their own churches. Seventy-nine percent of African Americans—84 percent of African American women—say today that religion is very important to them. Take them out of the Gallup and Pew religious polls, and the American religious statistics would look a little bit more like the Western European ones. Again, it’s only a difference of degree, but . . .

Immigrant traditions helped influence older American congregations to turn themselves into centers for girls’ guilds, boys’ brigades, women’s associations, men’s clubs, picnics, and parties. European congregations did some of the same things, but the Americans continued long after the Europeans put the brakes on: cooking instruction, bowling alleys, church parlors, diet groups, exercise sessions, yoga classes, skating parties, hayrides, sports teams—in short, a never-ending array of social activities designed to keep people coming back. In the late-nineteenth century, “institutional” churches offered such services largely to immigrant populations, but the activities also reflected innovations in the American economy. When the culture popularized efficiency, so did religious institutions. When businesses elevated marketing, religious groups began to “brand” themselves with distinctive symbols and identifiable signage. In some small towns, the only sources of public face-to-face social events outside the religious institutions are the holy trinity of American entertainment: baseball, basketball, and football.

Why do Americans seem so religious? Many reasons.

E. Brooks Holifield is Charles Howard Candler Professor of American Church History (Emeritus) in the Candler School of Theology and the Graduate Division of Religion at Emory University. A senior fellow at the Center for the Study of Law and Religion at Emory, his current research focuses on patterns of change in American religious history.