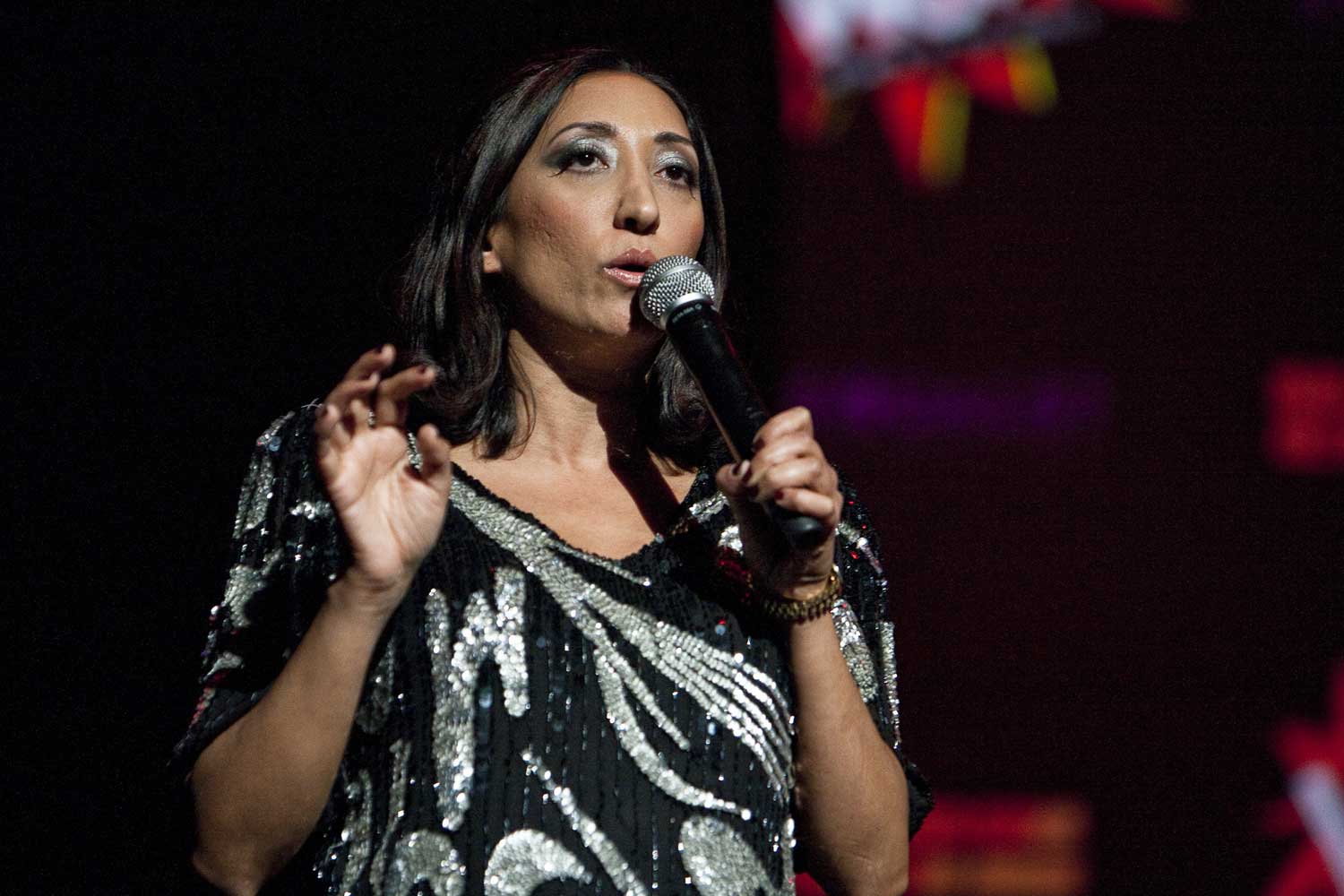 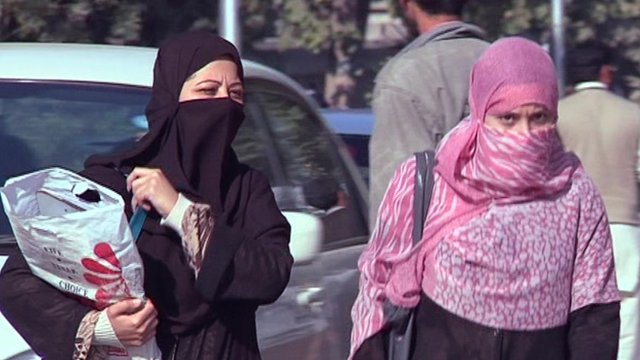 In mainstream popular culture, Muslim women are generally represented as “veiled and oppressed.” Stereotypes of Arab/Muslim women in mainstream popular culture mostly pertain to the veil; the definition assigned to it as “oppression” has not changed since French colonial occupation of Algeria. Although cultural producers are making efforts to counter stereotypes of Muslims overall, the veil continues to be a stereotype that still carries one interpretation only, a colonial generalization that dismisses women’s individual backgrounds and identities. The definition assigned to the veil as “oppression” implies that it is imposed on all women in all Muslim communities everywhere. This form of gendered Orientalism makes women an attribute of religion.

In Evil Arabs in American Popular Film: Orientalist Fear, Tim Jon Semmerling argues that stereotypes persist because non-stereotypical depiction threatens to subvert American ideology. When analyzed in popular culture and mass media context, stereotypes of veiled women reiterate societal anxieties and attitudes that reinforce Orientalist fear, becoming what Semmerling argues for Americans is a means of augmenting “our own stature, our own meaning, and our own self-esteem in times of our own diffidence” (p. 55-56). Female comedians in the Muslim diaspora have been responding to the stereotype of the veil through a “humor of incongruity” to create a space for viewers to form new understandings that place both the veil and women in alternate contexts.

Humor of incongruity is a form of humor consisting of common presumptions that are “inappropriate, absurd or inverted” (Michael, 2011). By incorporating stereotypes, and the veil itself, into their routines, comedians remind viewers of the absurdities of Orientalist fear, and they offer realistic perspectives of social anxiety. Stand-up comedy then creates a space for a new form of knowledge that highlights individual, everyday experiences that include Muslim women’s backgrounds and current contextual realities.

When it comes to impacting public opinion, highlighting individual, everyday experiences are more effective than displaying counter-images. Opinions are influenced when cognitive frames are altered by new knowledge that allows viewers to place stereotypes in a different context in order to form new opinions. For example, fiction is considered to be a more effective form of popular culture in terms of relaying more realistic insights into Muslim women because the writing is on numerous everyday experiences instead of on one single representation, i.e. the veil. The commonalities of daily life, combined with descriptions of women’s contextual realities, backgrounds, agencies, and individualities revert stereotypes by redirecting the gaze from the “veiled and oppressed” woman. By highlighting the ordinary, the public imaginary is directed toward new understandings of transnational Arab/Muslim identities.

As a digital form of popular culture, stand-up comedy possesses the audiovisual capabilities that differentiate between literature and film and allow for control of both image and narrative. Additionally, stand-up is a cultural space that was originally created for minorities to counter the American racial system. Therefore, “[i]t is worth considering that funny forms of protest … might be useful to cool the fires of domestic hatred and point out the aspiring Emperor’s lack of clothes, or at least bring the idea into the public dialogue” (Sills, p. 160). Videos of Muslim comedians in the diaspora, as facilitated by technology and cyberspace, thus inform social perceptions by responding to the stereotype of the “veiled and oppressed” woman.

Generally speaking, the popularity of stand-up comedians is due to the everydayness of their topics. They tell anecdotes drawing on everyday themes that their audience is familiar with and can relate to. In addition to the everydayness in their work, however, stand-up comedians also highlight stereotypes through humor of incongruity, a concept that came into being at the same time as that of abstract thought and that is argued to have facilitated critical thinking, conceptual representation, and creative problem-solving. In this way, female stand-up comedians redefine the image of the veil, by offering other interpretations of the stereotype through a postcolonial humor of incongruity.

Combining narrative with spectacle to intensify their messages and drawing on knowledge that the audience is already familiar with to explain the absurdity of stereotypes, they offer new and alternate meanings to the veil. Iranian-American comedian Tissa Hami, for instance, wears and removes a veil during her performances while employing airport humor, a humor of incongruity that addresses the “evil” terrorist stereotype. “In the case of an emergency, please take a moment and locate the Muslim nearest you,” she says, pretending she’s an air hostess. By wearing and removing a veil, and by highlighting common social assumptions through which she can address the absurdities of Orientalist fear, Hami highlights the social anxiety channeled toward both the veil and Muslims as a group.

British-Pakistani Shazia Mirza’s opening line is “Hello. I’m Shazia Mirza, or at least that’s what it says on my pilot’s license.” “When are you going back to India, Paki?” she asks. Mirza also wears and removes a veil during her performances. “The women in my family in England all wear the burqa, and it’s great, because they all use the same passport.”[1] Veiled women only need one collective passport. The comedian reverts the meaning assigned to the veil through humor of incongruity while continuing to ironically group women as a collective through the use of one passport. By employing this joke, Mirza is also hinting at the stereotype of veiled Muslim women in Hollywood film that critic Jack Shaheen calls “bundles in black, huddled in groups” (2001). “Don’t worry, it’s a convertible,” affirms French-Tunisian Samia Orosemane, in reference to her own veil. Demonstrating freedom, choice, agency, and individuality, Orosemane, like Hami, also wears and removes a veil during her performances.

To conclude, videos of stand-up comedians redefine the image of the “veiled and oppressed” woman from “oppression” to post-colonial incongruity. Exchange of content that highlights spatially contingent worldviews and anti-Arab/Muslim sentiments creates space for audiences to learn of alternate social contexts and representations of the veil. The use of the veil in stand-up comedy does not reiterate stereotypes. Rather, by highlighting common social assumptions, stand-up comedy offers postcolonial and diasporic contextualization of Muslim women that reveal the complexities of representations in mainstream popular culture and as caused by Orientalist Fear. As a form of digital popular culture, stand-up redefines the veil by creating a new space that places stereotypes in a new context. This enables viewers to form new opinions. By highlighting the ordinary, the public imaginary is directed toward new understandings of transnational and diasporic Muslim identities that are depoliticized; and by highlighting common social assumptions, stand-up comedians argue for a realistic perspective of Orientalist fear.

Lamiae Aidi is a student at Concordia’s PhD program in the Humanities. Her most recent project is on responses to stereotypes of veiled women in North American popular culture. Her previous work at CUNY and SUNY includes Middle Eastern music videos featuring women and depictions of women in Francophone and Latin American literature and film, respectively.