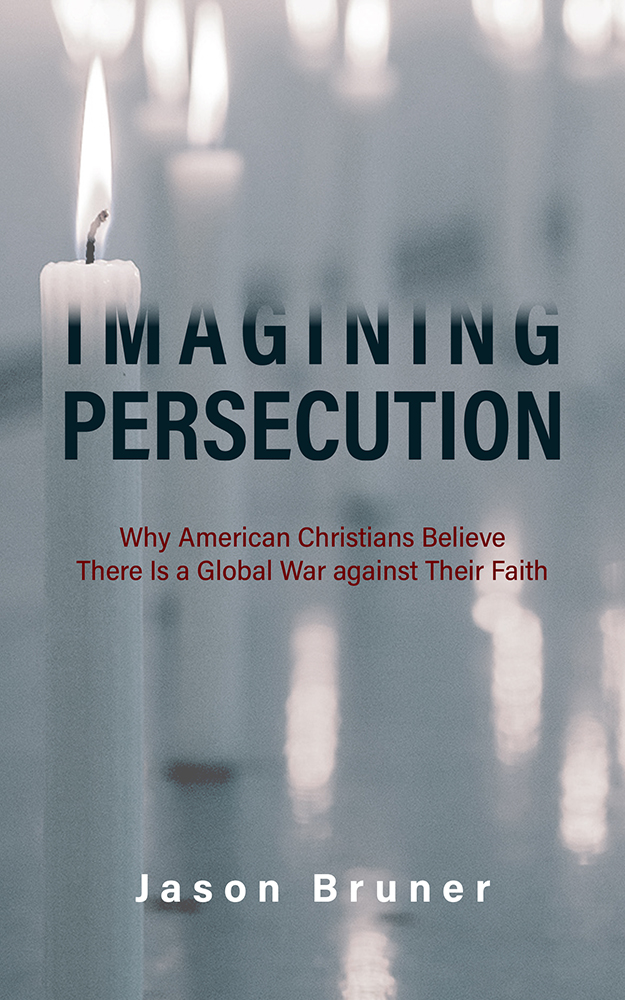 In our interview series, “Seven Questions,” we ask some very smart people about what inspires them and how their latest work enhances our understanding of the sacred in cultural life. For this segment, we solicited responses from Jason Bruner, author of Imagining Persecution: Why American Christians Believe There is a Global War against Their Faith (Rutgers University Press, 2021)

The initial spark came from an ordinary conversation with a family friend nearly a decade ago. I had been conducting research for my dissertation on a Christian revival movement in colonial East Africa when I returned to visit my hometown in north Georgia. When she asked me what I was researching and I responded with “the history of Christianity in Uganda,” she immediately told me she had read about how Christians over there are being persecuted. (Demographically speaking, Uganda’s Christian population is around 85%, and Christianity often plays a very prominent and vocal role in public life.) What piqued my interest was not only her quick confidence that simply because Christians lived “over there” somewhere, in a place that she didn’t otherwise know much about, that they would, inevitably, be persecuted. But I was also struck by the stark differences between how we viewed Christianity on a global scale: her, viewing it through the lens of severe duress, and me, due to my training in a World Christianity doctoral program, viewing its recent history as one of dynamic growth worldwide. Where did her inclination to view the world in terms of global Christian persecution come from? Was she showing me a gap in my scholarly training? And what were the implications for how American Christians like her understood their faith and the place of Christianity within the world today?

This book is about how Christian ideas of persecution and martyrdom have created global identities that transcend the doctrinal boundaries of particular Christian traditions. I’m especially interested in instances of persecution throughout Christian history that have (or haven’t) created the contexts in which Christians of differing traditions or denominations came to regard one another as genuinely, or truly, Christian.

Over the past 25 years or so, some American Christians have made concerted efforts to leverage this common Christian identity for the sake of politically mobilizing on behalf of their “persecuted brothers and sisters in Christ”—to use a common phrase from the literature. These efforts have framed certain forms of suffering as a particularly Christian suffering, with the sense that the suffering of fellow Christians carries with it a spiritual and moral obligation for Christians to act. To do this, Christian activists draw upon a long tradition of Christian theologizing around persecution and martyrdom, because most Christians hold that there is something definitively sacred about suffering and dying for one’s faith.

For me, the most fundamental question the book asks is one that, if I can admit this, I don’t fully answer: In a world filled with suffering, how and why are we made to feel as though some forms of suffering ought to matter to us more than others? For Christian readers, especially those who are familiar with the literature on anti-Christian persecution, I would frame it this way: In whose suffering is Christ present, and why?

Second, I hope readers come away with some skepticism about the ways in which Christian suffering has been (and is being) leveraged politically. This is most evident in the use of astronomical statistics of Christian martyrdoms, which some research and advocacy groups have calculated as being in the range of 90,000-157,000 per year over the last 30 years. I deconstruct these statistics in the book because I think they are mobilized in ways that don’t contribute to the resolution of the violence they try to identify.

Any book has an extensive list of scholars and writers whose work has affected it in one way or another. When I first started reading about the topic back in 2013, work by Elizabeth Castelli and Candida Moss was influential. More recently, Melani McAlister’s superb The Kingdom of God Has No Borders was most helpful. And I’ve long admired Jeff Sharlet’s writing on American religion and politics, though I’m under no illusion that my book has the literary merits of his work.

I also thought about my father-in-law, who received a copy of my first book, which was about a revival movement in colonial Uganda. The next time I visited him, he showed me his copy of the book, with a bookmark sticking out a few pages into the introduction. He smiled and said, “A lot of the sentences make really good sense after I read them 2 or 3 times. But let me ask you, have you ever read John Grisham?” So, I kept him in mind as I wrote, wanting to have more sentences that interested non-experts wouldn’t have to read 2 or 3 times for them to more sense. Still, this book isn’t simply a summary of previous scholarship but seeks to make new arguments and analyses while keeping them intelligible for students and laypeople.

I started writing the book in 2015, and I mostly had in mind John Allen Jr.’s book, The Global War in Christians, as a point of critique. I thought that my book would be about an idea—like, Isn’t this interesting that people are saying there’s a global war on Christians? But then early in the Trump administration, anti-Christian persecution got leveraged, such as with language in the 2017 “Muslim ban” executive order that prioritized “religious minorities” from predominantly Muslim countries—a clause that drew directly from efforts by anti-Christian persecution activists in the 1990s. When I had started tracking an idea, I found myself trying to keep up with a powerful politicized movement that I had clearly underestimated before. I set the manuscript aside several times because I wasn’t sure how to write a book about a topic that suddenly felt like it was developing by the day. I eventually found the form the book ultimately took, which is a kind of historical genealogy and analysis of how Christians have used ideas about persecution and martyrdom to think about who is truly Christian.

When I presented an overview of my project at a workshop hosted by the Louisville Institute (which provided funding for the project), one scholar raised an issue that I hadn’t fully considered. She questioned the centering of white Christian aggrievance, as opposed to those who had been harmed by that sentiment – namely, LGBTQ people, as well as Black Americans and ethnic minorities. Some of that critique seemed to be that if you analyze it, then you in some ways legitimize it. So, I tried to weave in dimensions of that harm throughout the book but ultimately decided that outlining a genealogical history of where I think some of these ideas originated and how they have changed over time was important to keep as the central argument.

I’m finishing up an edited book on similar issues with my good friend, David Kirkpatrick. We have a really impressive collection of chapters from emerging and established scholars on issues of persecution, violence, and agency in World Christianity. The ultimate aim of that project is to generate new analytical and methodological ways forward in light of a rather bifurcated set of literature which, on the one hand, engage with international religious freedom or religious persecution, and on the other hand, deal with global Christian growth, expansion, and vitality.

I’m also eager to start research on a new ethnographic project based in the metro-Phoenix area, but it looks like I will need to wait until public health circumstances allow.

Jason Bruner is an Associate Professor of Global Christianity in the School of Historical, Philosophical, and Religious Studies at Arizona State University.