Trump and the Apocalypse: Or, the Ribald Religion of New Orleans’ Krewe du Vieux Parade 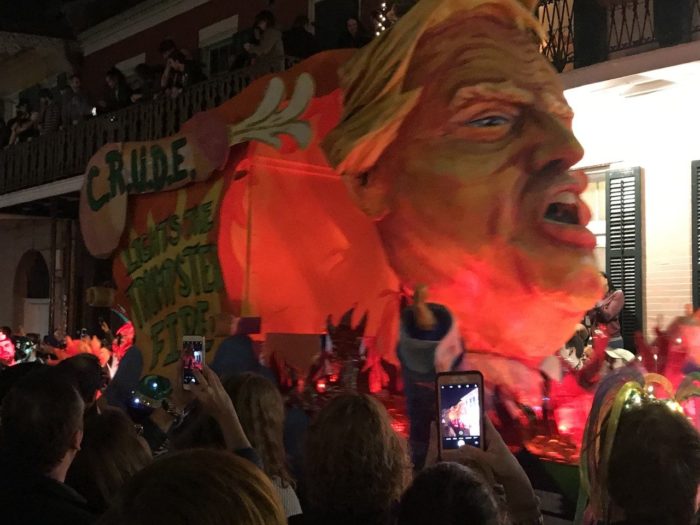 “Krewe du Vieux,” declared the 2020 parade queen B.B. St. Roman, is “the most spiritual Mardi Gras Krewe.” Founded in 1978, Krewe du Vieux is also known “for its wild satire, adult themes, and political comedy.” This year’s theme was “Erection 2020.”  St. Roman, who works as the civilian director of the New Orleans Police Department’s homelessness assistance office, was once Dr. John’s road manager and has always been a religious seeker and pilgrim. In her global travels, she said, “I met spiritual leaders from Africa to the Himalayas, and one thing they have in common is they all have a good sense of humor ” (Le Monde de Merde, 2).

Home of the United States’ most infamous Mardi Gras parade, the city of New Orleans hosts an entire season of parades that begins several weeks before Fat Tuesday. Over 80 social clubs called “krewes,” which include the Krewe of Zulu and the Mardi Gras Indians, devote enormous time, talent, and money to conceptualizing, designing, and building the floats that they will ride or accompany in the season’s 79 parades. Although the parade season is timed to coincide with the Christian calendar, its participants often locate their sense of the sacred in the religious and social boundary-crossing that marks Carnival around the world.

Krieux du Vieux’s seventeen subkrewes, all independently operated voluntary associations, are united by their common commitment to turn the most profane themes into a  communal ritual of critique, lament, and ribaldry. If the parade is religious, it is equally political. National and local political figures, with a special focus on the current President, provided ample material for the parade’s inclination toward the pornographic. Perhaps the most imposing float of this year’s parade was a huge dumpster featuring Donald Trump’s face created by the subkrewe called CRUDE. Appropriately colored orange and titled “C.R.U.D.E. Lights the Trumpster Fire,” the float featured a penis that ejaculates on Trump’s face. 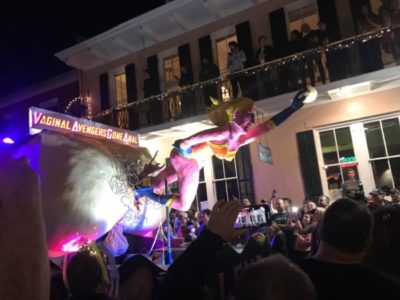 The Krewe of Michigas (Yiddish for “craziness”) portrayed a reclining President Trump, dollars in hand, receiving a hand job from an elephant—the elephant was using its trunk, in case you were wondering. “The Handjob’s Tale,” as the float was titled, included soaring dreidels, Hanukkah menoras, lots of six-pointed Magen Davids, and comments that Trump’s “schnoz” was larger than his “schlong.”

Erection 2020 also tackled the Iowa caucus and New Hampshire primary. The Krewe of Spermes promised that it would hold an “enormous cockus [caucus]” in their stead. Participants included Mike Bloomberg, who pledged to “blow” his money on a “big cockus” rather than on Iowa or New Hampshire. “Spermy” Sanders said that this year he would not get “cockus blocked.” Tulsi Gabbard, who is from Hawai’i, is quoted as saying, “I get leid all the time, but I am not going to miss this.”

Krewe du Vieux also contained some racial humor in the form of what Mardi Gras participants themselves might call “masking,” but we experienced as racist stereotyping. The Knights of Mondu built a “Chinese” float with a pagoda, a dragon, and Mandarin characters. Titled “China Handles Erection 2020,” the float contained the admonition to “Vote Amelican.” White krewe members wearing bamboo hats accompanied the float, pointing to the danger of imposing tariffs on China, which manufactures U.S. “voting machines and software.” We grimaced as the float passed by a Chinese-operated foot and back massage storefront on Toulouse Street. It was especially troubling given the anti-Asian contamination paranoia currently being generated in reaction to the coronavirus. 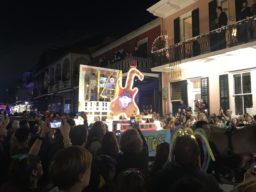 Local politics supplied fodder for the parade as well. The tragic Oct. 12 collapse of the Hard Rock Café building under construction on Canal Street was the subject of Mystic Krewe of Comatose’s “Erection Dysfunction” float. Three people died and dozens were injured when shoddy engineering, apparently approved by corrupt building inspectors, led to the failure of several concrete floors. Turning the neck of Hard Rock’s trademark guitar into a limp penis, the float saluted Delmer Joel Ramírez Palma, the Honduran worker who blew the whistle; Immigration and Customs Enforcement then deported him.

In a similar vein, the Krewe of Spank erected a Nola-opoly game float. “The object of the game,” according to Le Monde de Merde, “is to become the wealthiest player in a comfortably gentrified empire of your own through the buying up, over-developing and selling out of the City of New Orleans.” In order to win you must rely on “House Flipping, Political Contributions, Shoddy Construction, Short-Term Rentals, Shakedowns, Strong-arm Tactics, Shell Corporations, Public-Private Partner-ships, [and] Junk Bonds.”

And if the religio-political nature of this year’s parade was not already explicit, there were also nods to apocalyptic visions, including the “Wake Up Sheeple” float by the Mystic Krewe of Inane, which mocked climate change denial by comparing it to the conspiracy theories of tabloid journalism.  Its headlines included stories about a “cocktopus” in Lake Ponchartrain, “lizard people dancing in plain sight,” and the imminent flattening of the planet by “Louisiana obesity.”

If Krieux du Vieux is the most religious Mardi Gras parade because it is, as parade queen B.B. St. Roman remarked, the most humorous, then Erection 2020 was a satirical, grimly funny, and apocalyptic ritual. Even as we, the sheep, were being called to wake up and all the victims of U.S. politics were given permission to laugh at their oppressors, one might be forgiven for feeling less than hopeful about the future or uncomforted by the laughter. Such comedy might actually lead to sadness. And perhaps, in the end, that was the most religious element of this year’s Krewe du Vieux: at least we can be sad together.