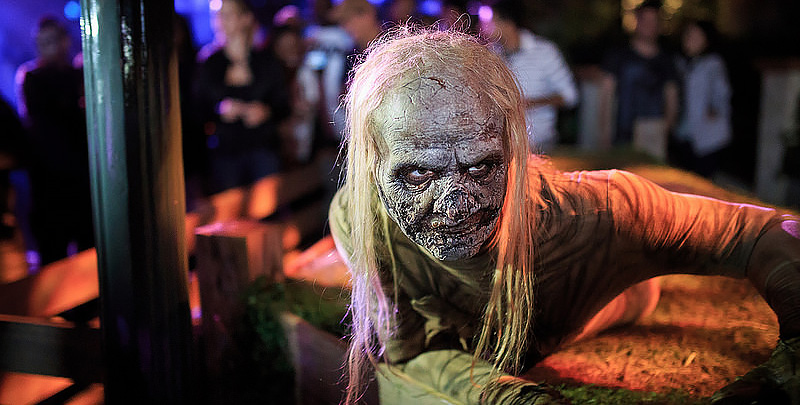 Monsters warn by example; they are are themselves terrible consequences—Edward Ingebretsen[1]

I have a hard time watching The Walking Dead. I hate to admit this as a scholar of zombies, but I will anyway. The show is hugely popular with viewing audiences, and fans of zombies, who first proved skeptical of this melodrama with monsters, have come around. On Sunday evenings in the fall and spring, viewers tune into AMC to see what will happen next. What new methods can be used to kill zombies? Which of our survivors will last throughout the season? What will they have to do to survive? Who will kill or be killed? I decided to begin a project on zombie apocalypses, in part because of The Walking Dead’s popularity but also because of burgeoning amount of zombie media, the books, films, products, television shows, memes, and apps that center on zombies. My decision also hinged on the uncritical embrace of zombies by fans, critics, friends, relatives, and my students. Zombies, I heard again and again, were fun. While they saw fun, I saw trouble. Where they appeared unbothered by gore, I couldn’t help but be struck by it. How could any of this be fun or entertaining? The gap between our perceptions was wide. Monsters are always already warnings, so I needed to know of what.

Zombies begged for cultural analysis. The fun they offered was not neutral, and I found that I had things to say as a scholar of apocalypticism, American culture, and religious studies. These monsters seemed to be the perfect case study to think through fictional ends in popular culture and their messages about particular moments in American history. If I turned away from doomsday prophets and end-times theologies and tuned into pop culture apocalypses, what might I uncover? What might be at stake in the celluloid, literary, and genre destructions of the nation and the world? Why was I unsettled when others were not? Fun appeared elusive while discomfort lingered. I am not a fan of zombies. Yet, I have now spent years of my life watching, reading, and thinking about these monsters. My partner routinely tells me that I might not be cut out for this work because of how I grumble and grouse about zombie media. I have to take breaks from monsters. I don’t like them, but I don’t have to either. Fandom is a common problem in the study of fictional monsters. It is so hard to critique things we have come to love. If our relationships with our subjects are based in love, how do we distance ourselves to say the things that should be said? I’m not sure we can. To love zombies requires a negation of faults and compromise on what you can criticize. Love blinds us. I want my eyes open.

Somehow, I’ve become a scholar of zombies, yet I’m still not a fan. While I started out as a scholar of apocalypticism, zombies emerged as one of my main case studies, the latest incarnation (revival?) of America’s apocalyptic habit. Apocalypses concern me, but monsters keep me up at night. I seek to know why they are popular. Why zombies? Why now? My answers to both of these questions feel tentative at best. You would think I would have better responses after years of research, but I don’t. We can learn much from our monsters, but these truths are complicated and nuanced. Routinely, people declare that monsters are about fear, escapism, and anxiety. I want to shout at them that zombies are about so much more. They shamble, moan, and signify. They are multitude rather than simplicity. Untangling their histories and their meanings is never as simple as pundits would have you believe. To declare the zombie is this and not that obscures the complexity of the living dead and how their fictional lives intertwine with our lives. Either/or is easy; both/and is harder. Also, be wary of those cultural critics who dismiss monsters as child’s play. They too ignore the power and peril of our terrifying fantasies. They overlook the monster’s purpose as a refraction of what we call the human. Monsters are the borders of humanity. Here be monsters is a warning but also a definition. Zombies, then, mark the limits of the human like all the scary creatures that came before them. When we happen upon a monster, we discover what we think of as human too. Defining the monstrous and the human feels too big a task, yet that is what is at stake for me in this process. I want to know our monsters to know us. What do zombies tell us if we let them? Are we ready to hear what they might have to say? Can we hear what they are saying over the moans and growls? I’m afraid of their stories, and you should be too. Fantasy conveys so much about our realities if only we would pay attention. This is of particular importance because zombies are most often the monsters who destroy our worlds. They are potent symbols that to tell us about the dangers of our currently infested moment and previous moments as well. This marriage of zombies and doomsday feels depressingly significant. It is not coincidence that they end us. Zombies are signifiers, and we need to understand them before it is too late to recognize their warnings. I still have a hard time watching The Walking Dead. Here be monsters with all their dire cautions. The show is bleak, brutal, and grotesque. Life is as unrelenting as the zombie horde. Along with millions of Americans, I have watched humans be torn apart by zombies. Humans dismember, shoot, impale, stab, shoot, punch, pummel, shoot, crack open, and slice the offending monsters. Humans also shoot, stab, beat, slice, and harm one another. Gore splatters the camera. Death, walking and final, is the real star of the show. Humans are at least as brutal as zombies. Sometimes, I fear we are more.

Diligently, I’ve made it through all five seasons. There were many stops and starts. Somewhere along the way I became invested in the survival of the ragtag group, which contracts and expands haphazardly. When the show becomes too much, and it often does, I stop watching for weeks at a time. I lose my nerve when the brutality becomes too much, when one of the compassionate characters dies, and when humans start to eat humans mimicking the monsters that have upended their world. That transformation made me realize the fragility and frailty of humanity, even in fictionalized moments of crisis. Much like the other zombie media, The Walking Dead wears me down. I’m not sure I can continue to watch. I also can’t look away. The ethics of this survival say something crucial about our moment, our time. I’m looking for hope; I find only bleakness. What are the zombies trying to tell us as they moan wordlessly on screen and page? What would they say to us if they speak? I hope they would tell us to not emulate them. No good can come of it. I fear that they would chastise us. I know that I keep watching and listening for a clue about what dangers we face. I write to banish the monsters away, but maybe the writing only conjures them more. I can’t decide, but I’m also not sure that I want to continue either way. I specialize in bad endings, but I’m not very good at realizing when I’ve reached an ending to my own work. At what point do we, as scholars, realize that we are at the end of a project before it’s even finished? When do we decide that the research and effort spent can’t carry us any farther? How do we decide to quit? How do we find an end? How can we be sure there won’t be a resurrection?

Kelly J. Baker is a freelance writer with a religious studies PhD who covers higher education, gender, labor, motherhood, American religions, and popular culture. She is the author of Gospel According to the Klan: The KKK’s Appeal to Protestant America (2011) and The Zombies are Coming! (2013). She can be followed @kelly_j_baker.   [1] Edward J. Ingebretsen, At Stake: Monsters and the Rhetoric of Fear in Public Culture, (Chicago: The University of Chicago Press, 2001), xiv. [2] “The Secret Behind Romero’s Scary Zombies: ‘I Made Them the Neighbors,’” NPR, (July 20, 2014).

1 thought on “There Be Monsters: A Warning”