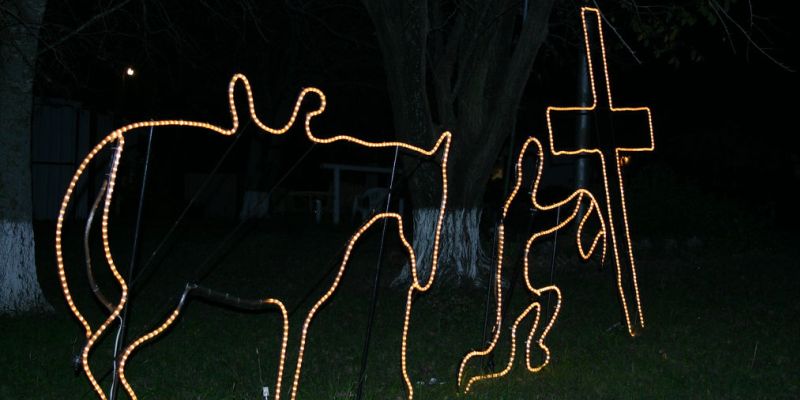 Crosses come in various shapes, sizes, and colors. They are ubiquitous in homes across the United States and pepper the abodes of people throughout the world. Odds are, you have one hanging in your home whether you are religious or not.

The art of the cross is a wide and diverse stream with the cross being transformed and translated throughout the ages to speak in new ways to new people in many contexts. Crosses are both religious and civil symbols, co-opted by various cultures and movements as articles expressing deeper realities and worldviews. In Peru, Jesus is hung upon the cross and depicted in Ayacucho style, donning a chullo — a Peruvian hat or “beanie” — eliciting his allegiance to the poor, the indigenous, the local. In Kenya, Jesus is not only black-skinned, but to elicit this complexion, he is shaped out of the hard wood of ebony. Further, to appeal to predominately caucasian European and North American tourists in East Africa, Jesus figurines shaped in both white and black shades of the ebony wood are for sale in curios so that these tourists find a mirror to their motley experience as white women and men in “black” Africa.

Then there is the cross in Texas. In the Lone Star State, crosses are odd and fascinating pieces of art. They can be found in virtually every boutique, on living room walls and encrusted on diamond-studded t-shirts, hats and women’s hand bags. The cross in Texas is a fashion statement, a decorative addition and a Texan “national” symbol.

As an explicitly religious symbol, the cross conveys the Christian belief in the crucifixion of Jesus of Nazareth and testifies to the concept of redemption for humanity through the suffering and bloodshed of Jesus. We might ask why a cross, the preferred Roman method of capital punishment in the Middle East in the early centuries of the Common Era, is such a popular piece of personal art.

Neo-evangelical speaker Rob Bell once asked a crowd in Tempe, AZ how many of them were wearing crosses. A little over half the crowd raised its hands. Bell wondered aloud why it is that so many people wear ancient symbols of torture, pain, and death, such as the cross. He offered the explanation that it has to do with the art of solidarity: that God sent Jesus into the world to scream alongside of us. He said at the event, “This is why for thousands of years, Christians have found the cross to be so central to life. It speaks to us of God’s suffering, God’s pain, God’s broken heart. It’s God making the first move and then waiting for our response.” For Bell and, as he argues, many Christians, the cross is a symbol of redemption through suffering. More than that, Jesus is seen as suffering with us, redeeming that suffering and standing in solidarity with all of humanity that screams out amidst the chaos and pain that we experience in the world — disease, death, war, and psychological affliction.

For some, the cross is more than a symbol of suffering and pain; it is also one of victory and redemption.

In Texas, the cross has taken on a whole new form, reflecting both Texas’ strong belief in its Christian heritage and its rough-and-tumble independence. Thus, in Texas, crosses are made out of leather belts replete with buckles at the apex. They are adorned with the seal of the state of Texas in the middle with words like “reign of God,” “LORD God Sabbath” and other militaristic and kingdom-oriented words from Scripture etched into the frame. Crosses are fashioned from cowboy rope, embellished with steer skulls, studded with turquoise or diamonds, and my favorite cross in Texas, wrapped in barbed wire with a “Lone Star” gracing rough hewn wood.

Texas is Texas, that’s for sure, and the cross has come to reflect the peculiar qualities that elicit fierce loyalty and identity from locals and both fascination and aversion from outsiders. But what makes Texas, “Texas?” And, consequently what makes Texans ingrain their culture in their crosses? Texans garner these attitudes and convictions from a history of rugged independence and a pride of their roots formed on ranches and fields that bring forth cotton, cattle, oil, politicians and football stars. There is an unwavering devotion to the Texan way of life, to what Randolph B. Campbell has called “personal liberty, rampant individualism, and admiration for the superrich.”

Although in general, the cross is a symbol of suffering and an icon of redemption and victory through pain and death, in Texas, the cross serves as a symbol of freedom, ingenuity, rough-and-tumble independence and strength. Some may find Texan crosses offensive, robbed of their Christian meaning and their orientation towards the sacrifice of Jesus. They may ask, “What does the cross of Texas have to do with the cross of Golgotha?” Such emotions are evoked because symbols such as the Texan cross do not have the historical crucifix in view, but instead what is symbolized by it — in this case, Texan identity.

Every cross in Texas is imposing, impressive or both. In this way, these crosses reveal something telling about Texan Christianity, and in some ways, Texan religion in general. It is loud, proud, and undeniably Texan. Indeed, the Bluebonnet State generates much attention because, as the cliché goes, “everything is bigger in Texas.” Specifically, as Campbell offers, Texas’ history and identity became, “myth-encrusted, not because it is so greatly different from the other states but because it is such an exaggerated version of the United States.” Essentially, what the U.S. values, Texans value, but to a more fervent degree; what characterizes the quintessential “American” typifies Texans to a greater extent. So in some ways, the Texan cross is the quintessential American cross — symbolizing hard-fought independence and individual victory harrowed in pain, toil, and blood.

More than speaking to God’s suffering and Jesus’ redemption of the world through his pain and death, the cross in Texas conveys a culture’s pride in itself, in its fortunes won through blood, sweat and tears, and reveals a cultural ideal of faith in God and country. It is the symbol of “Tex-ianity” and every cowboy, rancher, football player, student, oil refiner, or engineer, is meant to find in it the qualities of the Texan — hard working, independent, and faithful to God, family and state.

Ken Chitwood is a religion scholar, PhD student and teaching assistant at University of Florida, studying ethnography of Religion in the Americas with emphases on globalization, transnationalism, immigration, Latina/o religion and Islam. Chitwood is also a popular religion newswriter. He sojourned in Texas for four years in the Houston area.