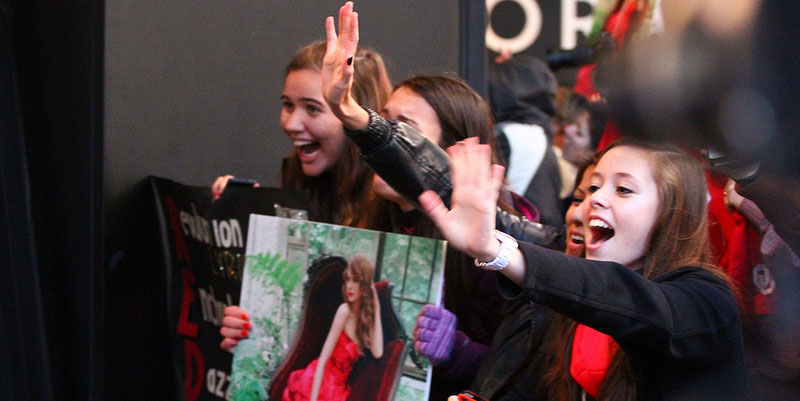 The patron saint of awkward, idealistic (white) girls lives in my home, a part of our soundscape. The kids and I dance to her music. I place the toddler on my hip and grab the six-year-old’s hand. We shake off our concerns and frustrations together. We laugh at our silly dance moves. We sing along. This is a moment, in which we let everything go and enjoy ourselves. Taylor Swift is not solely responsible for these moments of joy, but she provides the soundtrack. That’s all I can really ask of her.

I worship at the altar of this songstress born in 1989. I have for, at least, seven years. Her songs punctuate my day, dividing my time between silence, song, and the noise of small children. I listen as I write, as I walk, as I cook, and as I parent. Her voice moves with me as one day shifts into the next. Unexpectedly, her songs became the soundtrack of my life, before and after children, in academia and outside of it, for teaching and now writing. Tunes about break ups, new loves, and old flames kept me company in the car, at home, and at the office. Her songs played on as my life shifted and changed, a bridge between who I once was and who I could be.

I discovered Swift while I was pregnant with my first child. I was writing my dissertation on Klansmen, and my A/C broke at the beginning of New Mexico’s desert summer. I didn’t want to move, and I didn’t want to write. While I was desperately trying to get cool and avoid my research, I stumbled upon an article about a teenage country singer/song-writer, and I was struck by her earnestness and her story of becoming a songwriter in Nashville at 14.

I was raised on country music (and Michael Jackson). Or maybe, country music raised me. Its rituals and lessons are as familiar as they are ordinary. There’s a morality that makes it clear that God is present, prayers are necessary, and your actions define who you are (for better or worse). Long-suffering mamas can cure what ails us, and cowboys can take us away to a better future. Truth can be found in conversations on front porches and while driving on dirt roads. Hearts get broken. Hopes get dashed. Dreams fall apart; sometimes they never get put back together. People leave us. Alcohol helps us forget — if it doesn’t kill us first. Steel guitars, accents, and the familiar lyrics were the rhythms of my childhood.

While reading the article on Swift, I realized I had already heard her third single, “Our Song,” on the radio. It is an endearing tune about first loves, slammin’ screen doors, and talkin’ real slow. I bought her self-titled album and promptly played it on repeat. Swift warbled about Tim McGraw, fearsome daddies, revenge, teardrops on guitars, outsider status, and stereotypical visions of white, heterosexual monogamy. Swift takes those well-trod themes that dominate country music and places them alongside a teenage girl’s imaginings of love and loss.

Her music felt like home when I was far away from it. Screen doors, dirt roads, pick-up trucks, prayers before bed, and the laser-focus on abstinence until marriage were the artifacts of my teenage life. Swift’s songs tapped into a life I left behind, but still missed in ways I would never admit aloud. While I lived far from home, I still found its comfort in her music, but the comfort was separate from the heartache I wanted to escape. “Drew looked at me,” I sang along with her remembering the angst and drama of unrequited love. Belting “I was riding shotgun with my hair undone” brought back my Southern accent that I worked so hard to lose. My own alto singing voice sounded more and more country with each lyric sung. (Later, I would learn and be disappointed that Swift’s twang was manufactured. She’s from Pennsylvania, after all.) I sat in my overly warm house and sang my nostalgia.

I’m not alone in my devotion. Each of her five albums have sold more than four million copies with a grand total of 27.1 million copies in the U.S. alone. 1989, my current jam, sold more copies in its first week than any previous album in 12 years, and it is also her fourth No. 1 album. Fearless (2008), Speak Now (2010), and Red (2012) were also No. 1s. She’s won seven Grammys, 11 Country Music Association awards, and 12 Billboard Music Awards. Swift has 51.9 million Twitter followers (including me) and 21 million followers on Instagram. Celebrity mags follow her love life relentlessly to report on new beaus and ex-boyfriends. She has advertised for Keds, Diet Coke, Covergirl, Target, and LEI jeans. In other words, she’s the face to the brands of a certain type of middle class white womanhood. She’s wholesome and relatable. Swift appears as the iconic good girl, and fans love her for her songs, fashion, and charm.

Yet, my fandom of Swift is not so much about good girl charm or sartorial choices, but rather about how her songs make me feel. She made me feel rebellious while I existed in academic circles. Swift was the antidote to all things scholarly, self-serious, and tweeded. I listened and sang along to Taylor Swift’s albums to remind myself that I had an identity separate from academia. Her music brought back the country morals I’d grown up with. I covertly listened to her songs in my office as a form of sustenance.

As I navigated the academy, I haphazardly applied her songs and her moral vision to my life. Taylor Swift became one of my interpretive frames. When I was bullied one too many times by a senior colleague, I would put “Mean” on repeat. The strumming sounds of the banjo made me feel better as I sang “Why you gotta be so mean?” as an indictment. When I went on the job market for the last time, Swift’s “We’re Never Ever Getting Back Together” was my jam. My fondness for this particular song signaled an inevitability that I couldn’t face just yet. “Never Grow Up” makes me cry every time I hear it. I have one kid who seems more grown up with every passing day and a toddler who used to be a baby only mere months ago. I feel the pang of wanting them to stay small, so I can hold them close and keep them safe.

I find myself craving her visions of the way the world should work. The world that she conjures compels me. I find myself longing to dwell in songs steeped in middle class comfort, teenage innocence, and the overwhelming power of love to fix us (and to break us). She sings about excellent parents and little brothers, in ways that make divorce seem like an impossibility. I know intimately that this is not the case; my parents were divorced. Her songs make me wish for an idyllic family that I didn’t have growing up.

Moreover, the moral universe of Taylor Swift is beautiful in its simplicity. You dream. You love. You hurt. You don’t steal other people’s significant others. You don’t cheat. You don’t lie. You love some more. You tell the truth earnestly. You hope for fairy tale endings. You realize how unlikely it is that life works that way. You get second chances. You can start over (“be brand new”). You should have said “no” (to temptation). You can get revenge on girls who steal your boyfriends by slut-shaming them in a song (Not cool, Taylor, very not cool). You embrace that other people, particularly men, find you crazy. You can be young and reckless. You sleep only a little (Girlfriend, you’ll come to need sleep. Trust me on this). In spite of all of this, you remain hopeful and optimistic. Life won’t weary you.

There are other lessons too. Practical girls can rebel. Dresses work as both artifacts and metaphors. Bad boys can be good, but only for weekends. Nerdy girls have a shot at boys too (Implied lesson: heterosexuality is the only sexuality). Boys only want love if its torture (Um, no). Stories of us can sometimes turn out badly. Love can always “begin again.” Second and third chances are available (if you aren’t a cheater and before you’re married).

The starkness of her options laid bare in a breathy voice. Either/or options proliferate. Relationships are forever or they go down in flames. Stay or go. Love or nasty scars. I don’t want a scar, my six-year old wails. I don’t think you need to worry about this right now, I say and sigh. Later, we discuss how love and torture don’t necessarily go together. For a small moment, I regret my introduction of “Blank Space” to my children. Then, the moment is gone.

Swift creates a world in which the worst traumas are bad break-ups, lingering love, and drama-filled relationships. Her song-crafted vision appeals to me in part because I know trauma can be much, much worse. There are some losses that wound us in ways that we never fully recover. Taylor, there are more tragic fates than boys who no longer care. I know the world she presents is not the one I inhabit, though I do want to linger for a while.

So, I still listen to her.

As her albums progress (as she gets older), the fairy tales have been replaced with more ambivalent tales of love and loss. This is why 1989 is my favorite album, and possibly, the favorite of so many other people too. The binary options for love and hate are still in place, but the choices are more fraught and complicated. There’s a creeping awareness of the ambiguity of life, which I appreciate. Some weeks, I listen to the album over and over.

Taylor Swift is not my religion. I’m a devoted fan to her music. Yet, she dominates the untold moments of my ordinary life. She is part of how I make time, a constant presence of my days and nights. Her presence passed onto my children, who are now devotees to the altar of Tay Tay. My toddler asks to “dance dance” to “Shake It Off” while carrying around our portable boom box. He sings “umm umm” as he wiggles and shakes. His chubby hands grab the boom box and he staggers around to its sick beat. Despite her misgivings about the lessons of “Blank Space,” my six-year-old asks for songs by name. She would listen to “Welcome to New York” on repeat if I would let her. Sometimes, I do.

Kelly J. Baker is the author of Gospel According to the Klan: The KKK’s Appeal to Protestant America (Kansas 2011), which employs the 1920s Ku Klux Klan as a case study to explore the intersection of Protestantism, nationalism, whiteness and gender. Her recent work includes articles on the Klan’s robes and fiery crosses as material religion, “Rapture readiness” in contemporary Christian apocalypticism and zombie apocalypses in contemporary film and literature. She can be followed @kelly_j_baker.

2 thoughts on “The Altar of Taylor Swift”