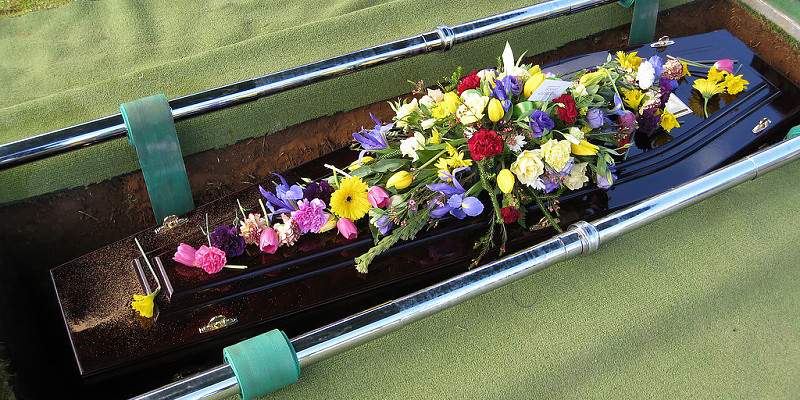 “What do you want done with your body when you die?” This is a question I never fail to get from undergraduates in my college Death and Dying course. I’ve taught the class at Emory for roughly twenty years, and after a semester spent exploring attitudes toward death and mortuary practices over time and around the globe, students are most curious about this: the ultimate questions—not in theory, but in real life. My real life.

My answer is always playful and played to shock them. Depending on my mood, I might respond: “I’m planning to be embalmed, put in my best suit, and put on display in an open, ornate casket with beautiful flowers all around and lots of guests who will listen to my favorite music—the mournful tunes of Wilco, Uncle Tupelo, and Golden Smog.” Or, if I’m feeling more macabre than normal, I’ll say: “I’d like to stream my decaying corpse on my Facebook page. That way, as it’s being eaten by vultures and other birds of prey, all of my friends can contemplate it, and better grasp the true realities of this physical body.” Each time I get the question I usually mix it up. “Cremation and thrown to the wind is my preference,” I might say; “unceremoniously buried in an unmarked grave in a natural setting” is another favorite as well, and quite popular at the moment.

What do you want done with your body when you die? What an incredible question. Incredible, but not because it is so personal and, dare I say, sacred. It’s incredible in a different sense: I don’t think that question is even possible to imagine, or has ever really been asked, throughout human history. Method of disposal of the body is not really a choice—you don’t see many societies where individuals are given multiple options for disposition, or in which individuals make the decisions about their own corpses. Granted: the postmortem fates of the rich and powerful and the common folk are often not the same. But the very idea—what do you want done with your body?—is outside the conceptual realm of possibility in most of the world.

Funerary rituals are slow to change, they say. Through human history, available practices for disposing of the dead often remain stable; indeed, these practices are fundamental for conserving and maintaining social structures and power relationships. When the usual relations between the living and the dead are disrupted or abruptly transformed, it is likely that society is in the midst of dramatic upheaval and transformation.

In American history, the prevailing, dominant, deep-rooted model for human disposal was focused generally on two components: being present with the body before it disappears from society for good, and burying it in the ground. The details varied, but the results were the same: intimacy and proximity with the corpse, and internment in a churchyard or cemetery. The emergence of the funeral home in the later nineteenth and early twentieth century was spurred, in large part, by the Civil War and by the journey of Abraham Lincoln’s preserved and displayed corpse at its end. The nascent funeral home in the later years of the nineteenth century only reified these elements, thanks to embalming and the commercialization of cemeteries. Differences in practice emerged throughout the twentieth century in terms of race and class, but the core remained the same. And no one was given a choice.

All that changed in the 1960s: a time of tremendous cultural crisis and instability, protests, and disruptions. Along with the general social convulsions and challenges to cultural authority, one book in particular catalyzed a change in the way Americans dispose of their dead: Jessica Mitford’s The American Way of Death. Published in 1963, it opened the door for cremation and memorial societies to enter the public and private debates and deliberations on death rituals. More importantly, and in line with those times, Mitford’s book empowered consumers to consider costs and personal preferences, delegitimizing traditional patterns tied to the two primary institutional authorities that had managed funeral rituals to that point: the church and the funeral industry. The book raised uncomfortable questions about the real value, meaning, and purpose of the corpse for the living.

Since then, many forces have conspired to turn the moment of death into a moment of consumption, enabling consumers to make choices about the most appropriate mode of disposal and the most fitting funeral rituals. Now more than ever, these mortuary practices are determined by the living, before they die, and not by family members and friends, after death. Throughout American history, American mortuary practices were determined by two (male) social groups: religious figures and undertakers/morticians/funeral directors after the Civil War. These two groups are now only two among many authorities on mortuary choices, and the traditions they used to maintain are losing ground; other traditions and innovations in corpse disposal are now on the market, and are available to an eager market of spiritually free consumers.

Members of the Baby Boomer generation are now the primary consumers of funeral goods and services for dying parents. They are also themselves getting closer to death, a demographic trend that will turn the Baby Boom into a Corpse Boon (a boon for the funeral industry, at least). The Boomers have always demanded choice, looking to customize their purchases to fit their lifestyles, personalities, and personal predilections. The high priests and role models in American popular culture, celebrities and entertainment idols, also have assumed an even greater role in shaping attitudes and legitimating practices at the time of death, providing the public a new range of possibilities for what can and can’t be done with the dead in the second half of the twentieth and beginnings of the twenty-first centuries. Finally, the millennials have now arrived on the scene in the wake of the Boomers, and are increasingly identified as “nones,” (individuals unaffiliated with any particular religion but who are religious and spiritual in other ways). Their presence will surely only reinforce these trends—moving away from “traditional” American funerals and toward rituals with a more democratic, consumer-driven, and experimental sensibility.

What do the mortuary practices of a society tell us about that society? Why do the living care about the postmortem fate of the body? Does the treatment of the corpse have a bearing on how the dead are remembered? Are these religious questions? Ethical? Economic? The American way of death is, in many ways, a mirror of the American way of life, celebrating sacred values associated with individualism, free choice, and spiritual innovation and experimentation. In recent times, traditions have been losing ground; sources of authority about the dead body, and the ultimate meaning of death, have been shifting and diversifying. These changes in American mortuary customs speak volumes about religious and cultural realities in America today.

Gary Laderman is the Goodrich C. White Professor of American Religious History and Cultures, and Chairperson of the Department of Religion at Emory University. He has written on other topics besides death, including popular culture, science, sexuality, and drugs. Laderman was one of the founders of Religion Dispatches and is currently editor of Sacred Matters.

This article is posted in conjunction with Cosmologics, a magazine of science, religion, and culture through the Science, Religion, and Culture Program at Harvard Divinity School.