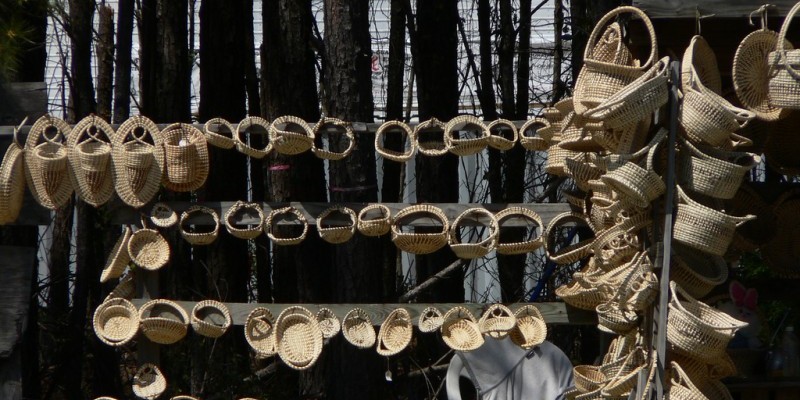 In our new interview series, we ask cultural theorists about what inspires them and how their latest work challenges our understanding of the sacred in American cultural life. For this segment, we chatted with LeRhonda S. Manigault-Bryant about her latest book, Talking to the Dead: Religion, Music, and Lived Memory among Gullah/Geechee Women.

1.     What sparked the idea for writing this book?

Talking to the Dead was sparked by my desire to reconcile my earliest encounters with the literature on the Gullah/Geechee people. I’m from the South Carolina Lowcountry and when I first began reading about the Gullah/Geechee as an undergraduate, I was struck by how I didn’t recognize anyone I knew—or myself for that matter—in what I read. I certainly didn’t read much at that time about communicating with the dead, which was an experience I had had quite regularly as a kid. This book has given me a chance to tell my own story alongside the stories of women like those I grew up around.

2.     How would you define religion in relation to your work? Where do you see the sacred or sacred things in this book?

The sacred thoroughly permeates this book. You can explicitly see the sacred where I describe how religious songs are sung, from my observations of church services and in my accounts of prayer and ecstatic shouting. These are the rituals that are more traditionally thought of as “religious” and that are the easiest to label as such. Then, there are other aspects of the sacred that show up in what may appear to be unlikely places. For example, one woman in the study is a local root-worker and herbalist who sees her practice as a sacred quest. Another woman has deep spiritual connections with her deceased grandmother when she uses her hands to manipulate sweetgrass. These acts may not be traditionally interpreted as “religious,” but they have sacred—even religious—meaning to the seven women described in the book.

I define religion—in this book and in my own life—very fluidly. Religion is one of the many aspects of culture that informs relationship to others, how people make sense of the world and how they act based on that understanding. In my view, there is a sinuous relationship between the sacred and the religious that is shaped by how individuals interpret the significance of a given moment, relationship or experience.

3.     Can you summarize the three key points you’d like the reader to walk away with when finished?

4.     Who are your inspirations or intellectual models for you as you wrote this book?

I think it’s quite fitting that my writing was impacted by the voices of the living and the dead. My always-there inspiration is my husband James, who is a beautiful writer and offered substantive stylistic and editorial feedback over the years. Another voice that was always with me was the inimitable Zora Neale Hurston. Her ability to tell a story was nothing less than masterful, and I wanted to craft these women’s narratives in a way that she would be proud of. Then there is the Canadian writer Lawrence Hill, whose voice influenced me during the latter writing stages. I teach his book Someone Knows My Name in my classes, and I found myself trying to stylistically emulate his seamless weaving of fact and fiction.

5.     What was the most difficult thing about writing the book? Did you encounter any unexpected problems or challenges?

I’d say that the hardest part of writing the book was giving myself sufficient time to grapple with the subject matter without worrying about any specific timeline. Talking to the dead is a metaphysical practice, and it’s difficult to translate that which is metaphysical into words. I had to allow myself ample time to unpack what the practice means to the women in the study while figuring out what it has meant in my own experiences.

I also had to balance the extensive time that writing and revising takes alongside the demands of the job and my efforts to remain a good (and sane!) wife, daughter and friend. The irony is that the dead don’t operate on any living sense of time, so I had to be patient with the process. I’m very fortunate that I didn’t have any surprises along the way, even considering that at the outset I didn’t know that the book would become what it has.

6.     What’s the most unexpected response, critical or positive, that you’ve gotten about the book?

When I first began shopping the book, I received an unexpected response from a reviewer that I should turn this project into a play. I was initially offended because I see the book as intervening in a long history of exoticizing these communities. Over time though, I came to realize exactly what that reader was trying to get me to see: the women’s stories are so beautiful and so vivid, and the written word doesn’t capture those elements in the same ways that a “live” reading or a dramatization like Julie Dash’s film Daughters of the Dust does. As I got further along, I strived to use my writing to make the narrative “come alive,” so to speak. I’m much more appreciative of that early remark now, especially so after seeing my friend E. Patrick Johnson’s performance work for his book Sweet Tea: Black Gay Men of the South, an Oral History. I don’t have any specific plans to turn this into a play but it’s an interesting idea.

I’m already at work on my next solo project, entitled Pushing Weight: Religion, Popular Culture, and the Implications of Image. It’s more along the lines of my recently published, co-authored book on Tyler Perry, and explores how black male comedians are using fat drag performances to depict black religious expression. I’m also hoping to delve into writing about my interests in the relationship between religion, race, and science fiction, which is inspired by my long and deepening love for Octavia E. Butler’s work.

LeRhonda S. Manigault-Bryant, PhD, is Associate Professor of Africana Studies at Williams College. She is the author of Talking to the Dead: Religion, Music, and Lived Memory among Gullah/Geechee Women (Duke University Press, 2014), and co-author of Womanist and Black Feminist Responses to Tyler Perry’s Productions (Palgrave Macmillan, 2014) with Tamura A. Lomax and Carol B. Duncan. A proud native of Moncks Corner, South Carolina, Rhon navigates the academy as a scholar-artist, and teaches courses that merge her life as a vocalist with her interdisciplinary specializations in religion, gender, race and popular culture. You can follow her on Twitter @DoctorRMB.