Black History Month in 2015 was marked in singular fashion, with the publication of a new edited volume of select speeches and essays by Martin Luther King Jr. The book is edited by Cornel West, and was recently released by the Beacon Press in Boston, with the provocative title The Radical King.

West entitles his introduction to the volume “The Radical King We Don’t Know,” and throughout the book, West dips into the details of a life, as well as an intellectual and moral trajectory, we truly never knew. When Coretta Scott and Martin went on their first date, Coretta remarked afterwards that “[she] had never met a black socialist before” (221). King had studied with Professor Walter R. Chivers at Morehouse College and had read thoroughly into the Marxism of his day.

In August 1967, when King delivered his last and most radical speech to the SCLC in Atlanta, he rejected the excessive materialism of Marxist philosophy. But that was not all he did.

The truths of both, this preacher said. That is radical indeed, in the then reigning hot-and-cold war of contested ideologies. That is why King published a laudatory essay on WEB Du Bois in Freedomways, a quarterly review of the freedom movement. In “Honoring Dr. Du Bois,” King saw him not only as “an intellectual giant” (113), but as an activist, an historian and a peace leader (117). Du Bois’s socialist-communist commitments did not count against that, and did not call Du Bois’s pedigree into question for this, “the radical King.” 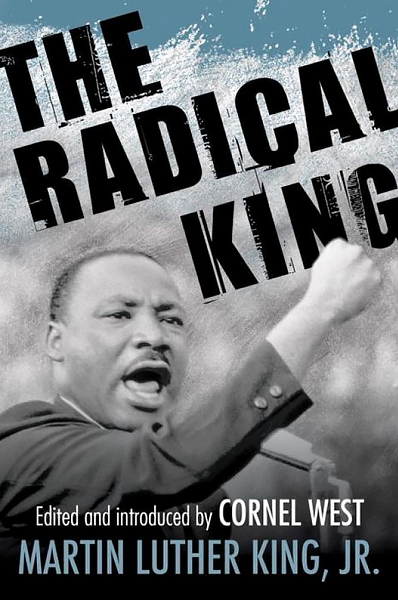 It is in this sense that we should understand King’s various commitments–to the civil rights struggle at home, his opposition to the Vietnam War, and his increasing insistence on addressing the problem of poverty and economic injustice here and around the world–as of a piece.

One of the most famous of King’s public addresses was delivered exactly one year before his death, at the Riverside Church in New York City, where the Reverend William Sloane Coffin presided. It was a moment of complex triangulation: those who supported the war might well break with the fragile coalition King had formed; those who opposed the war but did not share King’s religious commitments would not fully understand what he was trying to achieve. Thus the following words are most instructive:

Why are you speaking about war, Dr. King? Why are you joining the voices of dissent? Peace and civil rights don’t mix, they say. Aren’t you hurting the cause of your people, they ask? And when I hear them, though I often understand the sources of their concern, I am nonetheless greatly saddened, for such questions mean the inquirers have never known me, my commitment or my calling. Indeed, their questions suggest that they do not know the world in which they live. In the light of such tragic misunderstanding, I deem it of signal importance to try to state clearly, and I trust concisely, why I believe that the path from Dexter Avenue Baptist Church–the church in Montgomery, Alabama, where I began my pastorate–leads clearly to this sanctuary tonight (202).

West considers this the single most revealing moment in King’s impressive speaking career. The “tragic misunderstanding” of King’s moral trajectory is not ended, West suggests, least of all among those contemporary social activists who equate economic success (primarily their own) with the movement’s success.

There is a great deal here that we have not known, given the “Santa Clausification” (74) of King’s legacy in the United States. King identified as a socialist already in the early 1950s. In 1964, FBI tapes reveal that King was discussing strategies with Malcolm X for using the United Nations Human Rights Declaration to condemn treatment of black people in America; Malcolm wanted to meet King to coordinate their efforts, but was assassinated before they did so. By 1965, King had made economic redistribution one of the three central tenets of the movement; he was killed in support of a sanitation workers’ strike in Memphis. He worked hard on black voter registration, north and south, and yet was unacknowledged when the black candidates he supported won. On the last day of his life, King phoned Ebenezer Baptist Church in Atlanta with the title for upcoming his Sunday sermon: it was to be “Why America May Go to Hell” (ix).

“This book unearths a radical King that we can no longer sanitize.” The King West portrays here was “anti-imperial, anti-colonial, anti-racist, and [a] democratic socialist,” but he was also courageous in every sense of that term, even and especially in the face of death. “Could it be,” West asks, “that we know so little of the radical King because such courage defies our market-driven world?” (xvi)

As West tells it, relating King’s story to his own story, and those times to our own, the trajectory was harrowing, and radically uncertain.

There was intense FBI pressure, including attempts to make him commit suicide. The black civil rights leadership was trashing him. The white establishment had rejected him. The young black revolutionaries were dismissing hm. Yet deep down they knew his radical love for them was unconditional. Deep down they knew his radical witness was sincere, shot through with a depth of radical humility and radical integrity they could not deny. (222)

Louis A. Ruprecht Jr. is William M. Suttles Professor of Religious Studies and Director of the Center for Hellenic Studies at Georgia State University. His latest books include Winckelmann and the Vatican’s First Profane Museum (Palgrave Macmillan 2011), Policing the State: Democratic Reflections on Police Power Gone Awry, in Memory of Kathryn Johnston (Wipf and Stock 2013; 2015 rereleased with a new afterword, “Policing the State after Ferguson.”) and Classics at the Dawn of the Museum Era: The Life and Times of Antoine Chrysostome Quatremère de Quincy (Palgrave Macmillan 2014).