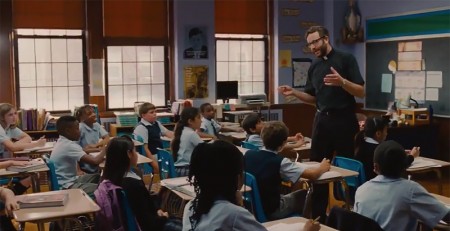 John Michael McDonagh’s Calvary inverts a standard storyline. In this film from last year, a good priest must suffer for the sins of the bad priests. With the scandal of sexual assaults fresh in the minds and bodies of the villagers in the story, as well as the audiences who saw the film, priests have not had a positive place in popular consciousness. Which makes the portrayal of Father James (Brendan Gleeson) in a small Irish village so striking. This is “a good man, a fine man,” as one of the villagers states.

You can read my full review of the film, but what I’m interested in here is how Calvary is indicative of a curious new trend of portraying positive images of Christian priests and pastors in film and television. The images are not only positive, but the clergy are politically progressive. Maybe it’s a coincidence, and I’m not sure how quantifiable it is, but as someone who watches a lot of film and television, I’ve been struck by some representational shifts.

Previous priests and pastors have showed up in film and television as sinister figures (Brother Justin in HBO’s series Carnivále), purveyors of the strangely supernatural (Father Merrin in The Exorcist, Father Hennessy in Constantine), or covetous keepers of institutional secrets (Bishop Aringarosa in The Da Vinci Code). In other places they are tragic figures made hollow by trauma (Pastor Jamison in HBO’s The Leftovers), portrayed as conservative upholders of a straight-and-narrow tradition (Father Dominic in Downton Abbey), or worse as malicious profiteers of the conservative-powerful tradition (The Borgias in The Borgias, Father Benito in The Crime of Father Amaro). Then there are the roles in which they are more human, while their very humanity is at conflict with the larger religious institution; thus they are portrayed as sexually desirous humans (Father Amaro in The Crime of Father Amaro, Father Ladislao in Camila, Father Pilkington in Priest), or filled with doubt about the institution of the church (Father Gabriel in The Mission, Father Flynn in Doubt, Father Kiernan in Stigmata). The sexual-spiritual conflicts generally end up with an overly simplistic binary: single individual’s desires are the good guy, the institution of the church takes the fall. Finally, clergy are goofy figures whose frocked status provides a point of satire (the three priests in the Irish sitcom Father Ted, Reverend Lovejoy in The Simpsons, Father Billy in The Catechism Cataclysm). I’m sure the list could go on and on.

With such portrayals in the background, a new type of image has appeared. Here are some examples. (I’m going to leave Oxygen’s reality show Preachers of L.A., and its spinoffs out of it for now, as my focus is on fictional characters.)

The BBC series Rev. aired from 2010-2014, and was centered around an Anglican priest in inner-city London. Reverend Adam’s (Tom Hollander) days are filled smoking, drinking, and lusting, but he keeps left-leaning political practices: helping the poor, performing the ceremony of a gay couple, and trying to maintain a place for community in an urban environment. It is perhaps a post-Christian view of life, which is not to say it’s terribly interested in secularity. (See Kaya Oakes’s review here.)

FX’s The Americans (the fourth season begins next year) is set in the Reagan-era, which is both the culmination of the Cold War and the waning of evangelical connections with Republicanism. Elizabeth (Keri Russell) and Philip Jennings (Matthew Rhys) are embedded Soviet spies living in greater Washington D.C. They’re the pinnacle of Americana suburbia on the surface, but underneath they are trained to kill, to torture, to impersonate and infiltrate the CIA. They have two children who don’t know about their parents’ other life, though the daughter, Paige, increasingly suspects something is not right and her teenage angsty-rebellion is one of the highlights of the show. Against her parents’ atheism (the one thing that sets them apart from the “other” Americans), she goes off and joins a church. The parents are appalled when she brings a Bible home, reads it, and then wants to pray before meals. As I watched this subplot unfold in the series, I began expecting yet another ultra-conservative figure to emerge as a cult-like figure, but “Pastor Tim” turns out to be an anti-war, peace-lover who gets arrested protesting the U.S. involvement in wars in Central America. Elizabeth and Philip are concerned about Paige becoming baptized into a Christian church, but in one of the clever plot moves, it is the liberal politics of the pastor that makes the daughter’s decisions more difficult to navigate for the parents. They find themselves agreeing with him politically, if not theologically.

And the actor Chris O’Dowd plays a key role in Calvary, but he also co-stars in another of last year’s really good films, St. Vincent (dir. Theodore Melfi). Here O’Dowd plays Brother Geraghty, a charming Irish priest teaching at a Catholic school in New York City. When the young Oliver–around whom the strings of the story twist–transfers into the school, Geraghty helps him out. Along the way we get some nouveau-catholic pedagogy as Geraghty lets students describe their own religions: Protestant, Buddhist, atheist, and “nothing in particular” (“the fastest growing religion,” Geraghty cracks). The big student assignment is to write about “everyday saints,” and each child has to think of a saint in their own life, someone who “makes the world a better place for others.” In these ways, Geraghty is a pluralist; he remains Catholic even as he respects diversity, though here too with a humorous twist, “Catholicism is the best religion . . . because we have the most rules.”

Finally, an Icelandic film from 2013, Metalhead, is an excellent account of a sibling’s grieving process. Hera (Thora Bjorg Helga) mourns her brother’s death by picking up his electric guitar and teaching herself to play heavy metal. Beautiful scenes of her plugging in her amp next to her brother’s grave turns the guitar into a salve for the soul. Along with the metal and mourning, however, comes self-destructive behaviors and the family calls in the new local pastor. Turns out he’s a headbanger himself and he says, “God can also be found in the dark. Jesus wasn’t afraid of sitting with the outcasts.” Credit goes to writer/director Ragnar Bragason for not having the pastor “save” her–that she does on her own–but his role is to break down the simple oppositions that Hera and others have come to believe, that metal is all satanic and the church dislikes it. The film’s coda is a great family dance to Megadeath’s “Symphony of Destruction” as metal turns liturgical.

I don’t regularly attend church (but some of my best friends are ordained), so I’m not really interested in championing positive portrayals of priests and pastors, or critiquing negative ones, because I feel I’ve been slighted. But I am interested in the complexity of human identity, and the ways these complexities allow a variety of practices, beliefs, and behaviors. Simply for the sake of accuracy, it is important to represent diverse channels of human character. Religious identities intersect with sexual, ethnic, racial, gendered, and national identities, and none of these are monolithic. In spite of what we might think based on media representations, not all Christians are conservatives, and not all Christian clergy are narrow-minded, abstaining teetotalers in ignorant servitude to some “Church,” some tradition.

The priest/pastor figure has been a stock figure in films and television for years. Usually type-cast, they have filled a gap in a story but have had little space outside the bounds of narrow convention. But just as popular media have started to offer more complexity with regards certain factors of identity (which isn’t to say Hollywood isn’t deeply and maybe intractably racist and sexist), religious identity may also be coming into its own, and the secularist vision is showing signs of wear.