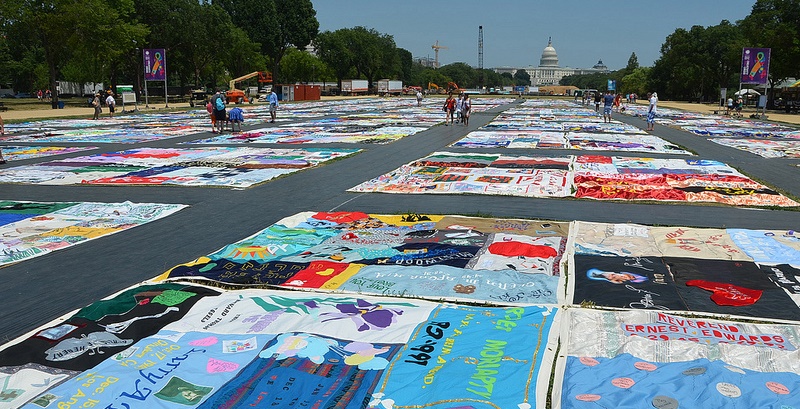 In our interview series, “Seven Questions,” we ask some very smart people about what inspires them and how their latest work enhances our understanding of the sacred in cultural life. For this segment, we solicited responses from Anthony Petro, author of After the Wrath of God: AIDS, Sexuality, and American Religion (Oxford University Press, 2014). 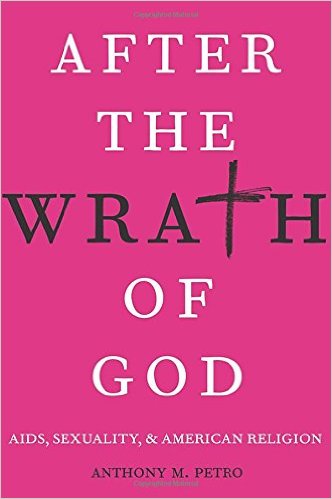 I wanted to write something about religion and sexuality for my doctoral work, but I never thought about writing on religion and the AIDS crisis until I watched a film by Gregg Bordowitz, an artist and professor at the Art Institute of Chicago. He happened to be screening some of his material in Atlanta, where I was living after finishing my MA at the University of Chicago. One of the scenes featured a gay black man standing at a microphone, describing how horrendous the AIDS crisis was at the time – in the 1980s – and then he spoke about God. Not in a negative way, but as a positive force, as a source of grace, even for gay men with AIDS.

I knew right then I wanted to do more research on this. But I was far less interested in conservative responses to AIDS, those that declared it a divine punishment. I was pretty bored with that kind of rhetoric and initially far more interested in progressive responses. As I started digging, though, I found that this binary – conservative versus progressive – was not useful analytically. So I turned instead toward what I call mainstream responses to AIDS, this vast middle ground that included evangelicals, mainline Protestants, and Catholics alike. Their positions still varied, greatly so, but they also had much in common with one another—and more in common with each other than with the rhetoric of the far right.

The book is quite influenced by Emile Durkheim and Mary Douglas, though it pushes more in the direction of their work on morality, which is tied to their ideas of the sacred. What becomes sacred for many conservative Christians—and soon for many Americans more generally—in this period is the family, or a nationalist myth of the family. In this story, the family—and the nation—came under threat by the 1960s and 1970s, especially with the advances of civil rights movements for racial equality, women’s equality, and gay rights. These movements pushed against boundaries that kept (white, heterosexual) families pure. With emergence of AIDS in the 1980s, conservatives and mainstream Americans alike could focus their anxieties and worries on a new scapegoat: gay men. Amid the moral panic spurned by the AIDS crisis, we find numerous representations of gay men, from descriptions of what many considered their “bizarre” sexual acts to images of men dying, marked by the scourge of AIDS which was also, for many Americans, a sign of gay immorality. The Christian Right made all they could of such images, but they were hardly alone.

In writing this history, I also wanted to show one form that “religious power” takes in the modern United States, to borrow a term from Talal Asad: the power of the moral form. I found it helpful to think about religious power and morality through what Michel Foucault calls biopower, which included new ways that people were called to relate to norms in the modern period, including norms of sexuality and health. I show how biopower could not, in the case of the AIDS crisis in the U.S., be disentangled from older Christian rhetorics of sodomy, homosexuality, and national security. In other words, there is no easy divide here between the secular and the religious. Rather, I argue that morality—the languages of morality—became an empty form through which Christian rhetoric could be translated into the languages of nationality, citizenship, and public health. This is the most important form that Christian power often takes today.

First, the AIDS crisis was a religious and moral epidemic. It was an occasion for Americans to articulate theories about why something so terrible was happening—what we in religious studies call theodicies—and to invest these explanations with new moral programs in public discourse. These responses were not only a consequence of the epidemic but also constitutive of the crisis itself.

Second, the most influential religious responses came not from the moral jeremiads of the Christian Right, but from the mainstream Christian languages used to foreground the need for compassion and to call for a new moral prescription for sex. As Laurent Berlant has observed, “compassion” is never quite as innocent an emotion as we sometimes think: it is structured by what she calls a “social relation between spectators and suffers,” a social relation that, during the course of the AIDS crisis, also led to a distinction between Christians and people with AIDS, between those watching the crisis and those living it, between those who were innocent and those who were not.

Finally, the AIDS crisis pushed more Christians—through denominations, in churches, as writers, and as individuals—to speak publicly about sex. Sex (and especially gay sex and premarital sex) could not longer be ignored. AIDS became an occasion to elaborate a fuller vision for moral sex. This vision succeeded because, far from refusing to discuss sex in the public sphere, like many in the Christian Right, it instead offered a normative claim about “proper” sex, which was monogamous sex within the bounds of marriage. This approach informed not only public health policy but also the grounds of what I call “moral citizenship,” the power to define the boundaries of national recognition. Since the 1980s, gay men and lesbians have moved closer to the center of moral citizenship by refocusing the political struggle for sexual freedom on the right to have intimate, monogamous relationships, that is, to model the very American myth of the perfect family.

My two most important models were Margot Canaday’s The Straight State: Sexuality and Citizenship in Twentieth-Century America and Lauren Berlant’s The Queen of America Goes to Washington City: Essays on Sex and Citizenship. I had copies of each—and they are two very different books—by my side when I was writing and revising! The question of inspirations is harder: there are too many. But there is something about the beauty of Mark Doty’s Heaven’s Coast: A Memoir that haunted me throughout the process.

There is an abundance—even an excess—of evidence, which could make it easy to get lost. In addition to the countless directions one could go with primary sources, there is also an immense and wonderful body of scholarship on AIDS in the U.S., from cultural studies, history, sociology, religious studies, media studies, and so many other fields. I wanted to read as much of it as I could, in part simply because it is so rich. So two of the hardest parts of writing and revising the book was letting stuff go and realizing that the historical narratives we write are always partly fictive in ways we cannot (and probably should not) avoid.

I think people outside of the academy, especially those coming from more activist backgrounds in AIDS work, are not quite sure how to place me. My hunch is that they think I might be a pastor! There is something funny about religious studies as a field, and the worry that we might secretly (or not so secretly) be doing theology. I suppose all religious studies scholars face this to some degree, but the suspicions are magnified for those of us writing for audiences historically more critical of religion in general. Still, I hope my book demonstrates how religious studies can contribute to work on the history and politics of AIDS in the U.S.

I’m working on a new project about the history of Christian engagements with public health and disability policy. I’m playing with a case-study approach, at least in the initial research phase. So I’m doing archival work on the history of Christian work on alcoholism, debates about euthanasia and end of life care, needle exchange, and the rights of children with disabilities. The project draws upon the methods of religious studies, the history of public health, and feminist and queer disability studies to demonstrate how Christian leaders and activists have shaped cultural understandings of health and moral citizenship. By tracking how American Christians have shaped cultural understandings of public health, including the health of the nation, I hope to show new forms that Christian cultural power has taken, even as the United States has become increasingly “secular.”

Anthony M. Petro is Assistant Professor of Religion at Boston University interested in religion in America and women and gender studies. His research centers on the history and politics of modern Christianity in the United States, and the intersections of religion, sexuality, medicine, and public health. He can be followed @anthonympetro.

1 thought on “7 Questions for Anthony Petro”