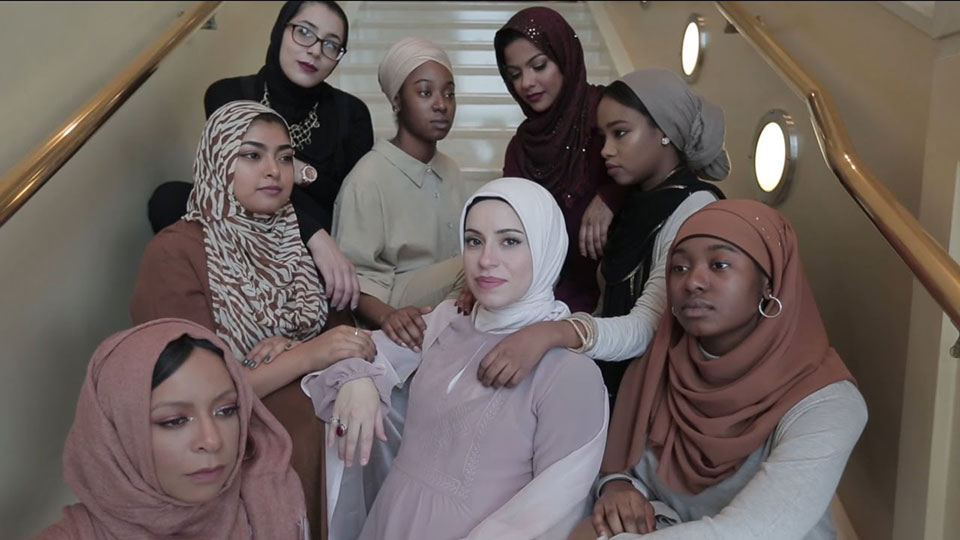 “Covered up or not don’t ever take us for granted,” advises Syrian-American rapper Mona Haydar in her 2017 music video Hijabi[1], a rap song about hijabis, women who wear headscarves. Muslim women and their choice of clothing take center stage in debates on ‘difference’ in the Muslim diaspora. Constructions of femininities and masculinities of the Muslim ‘other,’ stemming from Orientalist imaginations and from colonial feminist theories dominate the Western media, and the consumption and reception of stereotypes of women has resulted in a form of gendered Islamophobia. Consequently, hijabis, along with women who wear veils, are often discriminated against.

Gendered Islamophobia, which is a social justice issue, can only be reversed by ending the language of the Muslim ‘other’ that is prevalent in Western media. In other words, there is a need for media representations that include contextual realities reflecting the diversity of Muslim women. Western popular culture consisting of repetitive stereotypes prevents the public from alternate knowledge; and in order for the public to learn about other feminisms that demonstrate women’s changing roles and attitudes toward the hijab, it is important that there be a space in popular culture that hears from women who choose to wear a headscarf. “So even if you hate it, I still wrap my hijab.”

To address the social problem of gendered Islamophobia, rapper Mona Haydar opens by relaying questions directed at hijabis in the US, questions that reiterate the notion of difference between women in the East and in the West.  Debunking myths of Muslim women requires critique of imperialist propaganda.

Asking whether one’s headscarf is too tight implies discomfort on behalf of the wearer and suggests that the Muslim ‘other’ should reconsider her choice of wearing one. To point out the problem of ethnocentricity, Haydar tells the viewer that Orientalist discourse bores her and makes her uncomfortable. She needs to get her work done. Meanwhile, the audience should question its own knowledge. In this way, Hijabi reverses a Western paradigm of difference and brings to light the fact that stereotypes limit the growth of a deeper feminist exchange and growth of knowledge.

You need to get yo life
You only see Oriental
You steady working that dental
You poppin’ off at the lip
And run ya mouth like a treadmill
Not your exotic vacation
I’m bored with your fascination
I need that PayPal, PayPal, PayPal
If you want education

Haydar goes on to explain that hijabis are against the control of women and that they are traumatized by discrimination. As such, they want ‘no drama.’ Drawing on Egyptian goddess Nefertiti, the rapper reports that what she and her hijabi friends want is a world of female leaders that counter eighteenth century stereotypes of Muslim women as culturally inferior. Haydar finds that hijabis born in the 1980s are up-to-date with the modernity of the world; and she reminds the public that Muslim women, ‘covered or not,’ shouldn’t be underestimated.

The following, which is the main chorus, tells hijabis of all races that stereotypes of them are strategies of control. ‘Power run deep’. Addressing hijabis ‘around the world’, Haydar encourages women to ‘Keep swaggin my hijabis. Swag-swaggin my hijabis.’ That is, continue wearing your headscarves with pride even if predominant rhetoric and depiction of Muslim women remains negative.

The second verse emphasizes individuality and identity. And ‘Mipsters’, for example, are Millenial Muslims[2].

Citing numerous countries from most regions of the world, the verse highlights the global nature of the hijab and counters mainstream representation of Muslim women as Middle Eastern  Arabs. In this sense, the song is educational cultural capital that adds to predominant understandings of Muslim women’s geographic locations and backgrounds, and it offers the viewer new contexts and settings featuring the hijab.

Yet, despite the impressive number of YouTube views, which exceeds 5 million, Mona Haydar has been apprehended for her music video Hijabi because “the hijab is not an ‘artistic scarf’[3]. Nonetheless, the majority of viewers appreciate her resistance music as a response to imperial Western propaganda. Reviews commend her for ‘celebrating diversity of women around the world’[4] and for ‘slamming the hijab haters’[5]. In my opinion, the music video neutralizes Islamophobic rhetoric and creates possibilities for a more transnational feminist solidarity and East-West exchange of knowledge in the sense that it adds to meanings of the hijab as reflective of the diversity and individual agency of women.

In sum, through her choice of language and genre of music, Haydar reaches a global audience, and Hijabi becomes an example of a media that facilitates contemporary cultural exchange of knowledge. Through the lens of media as a form of pedagogy that shapes people’s identities and personas, the music video is a response to stereotypes of a subcategory of Muslim women that is represented as a problematic difference. It reminds women to voice their choice, it reiterates the same message as World Hijab Day.

In addition to the plurality of meanings that the headscarf holds for its wearers, hijab trends in different locations reflect a collective resistance to colonial domination and a solidarity with women that is meant to break stereotypical narratives. To address the social problem of gendered Islamophobia in the US, Haydar communicates through rap, an American genre of music that symbolizes solidarity with the marginalized.  And, reflective of a feminist American dissidence that began in the 1970s, she angles the spotlight on Muslim women away from the notion of difference to the right to religious freedom.

Lamiae Aidi is a PhD student in the Humanities at Concordia University. A product of the New York public education system, Lamiae Aidi is on the constant look-out for representations of women in marginalized communities. For her undergraduate research, she analyzed depictions of women in Francophone and Latin American literature and film; and for her Master’s degree, she wrote her thesis on sexually suggestive music videos featuring women in the Arabic-speaking world. Her most recent project is on the links between hate crimes targeting veiled women in the US and the media’s gendered depictions of women.