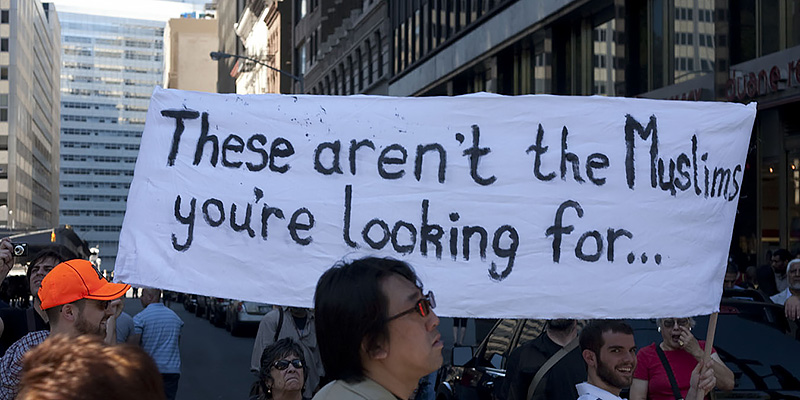 There is an idea of “Islam,” as a signifier of something foreign and threatening, that continues to plague American discussion of the religion. It is part of the shooting in Chattanooga, and it part of the debate around the Iran nuclear deal.

This view of Islam has been part of how America has defined itself since the founding of the country. Even though Thomas Jefferson used Muslims as the test case to see if the ideals he strove for could be realized, the cultural legacy of European wars with Muslim empires was too ingrained in the American psyche. Despite the large numbers of Muslims that existed in America at various times, including during the slave period and when the Philippines were a United States colony—thereby making a sizable group of Filipino Muslims American citizens—Islam, the religion, was always seen as a foreign entity.

Nearly 40 years ago, Columbia professor Edward Said observed that with the rise of modern news sources, Islam went from being an abstract, foreign entity, to being a living entity, which had a will and actions of its own. Rather than being a tradition constituted of human believers, known as Muslims, who argued about what their religion was about, we began to hear what “Islam says” and “Islam is.”

Therefore, as the United States, we could go to war with Islam; we could speak about the fact that Islam was corrupt; that Islam failed. Islam was no longer Ishmael to America’s Isaac, a distorted version of what made the United States great, and against which the nation could point and say “we are better than that.” Islam became Cain to America’s Abel, seeking to slay the nation.

Lt. Gen. William Boykin (Ret.), one of the chief architects of the War on Terror, repeatedly made statements, while in service, that the United States was at war with Islam and the false god of Allah, and implied that Muslims were agents of Satan. After retirement, he became more explicit, claiming that the greatest threat to the United States was Islam. More recently, Texas State Representative Molly White (R-Bell County) suggested that Muslims would not stay in her office if asked them to swear allegiance to America and renounce “Islamic terrorism,” while she displayed the flag of a foreign nation on her own desk.

This official, political discourse represents and influences popular perceptions of Islam. Hollywood, often described as “liberal” by its friends and foes, has consistently made racist and misogynistic movies, long after the culture had moved on from those viewpoints. While the film True Lies is often held up as one of the archetypes of “Islam is evil” films, there are so many more recent versions of the theme, including Dracula Untold, which actually inverts history to make Islam the villain.

On television, writer and producer Howard Gordon has made a fortune creating shows around the trope of “Islam is the enemy,” including 24, Homeland, and Tyrant. America’s favorite show, NCIS, used to have nuanced plot lines involving Muslims, but since writing off the only non-Christian character, have found a recurring enemy in Islam. Bill Maher is a self-declared liberal who declares that “Islam…is the most dangerous and violent [religion].” His frequent guest, Sam Harris, argues that “some propositions are so dangerous that it may even be ethical to kill people for believing them,” in talking about religion.

Harris has a PhD, in neuroscience not religion, and academics should know that the quote is not a definitive statement on how religious believers should be treated, but part of a larger argument. However, a reader who finds meaning in the text may simply read that religion is a thought crime that should be pre-emptively disciplined. This idea is more relevant if the reader is already culturally primed to perceive Islam as demonic. There are other academics who are more open in their Islamophobia, and none actually has any expertise in the matter. For example, Phyllis Chesler and Satoshi Kanazawa are psychologists, and Tunku Varadarajan is a business professor.

This conception of Islam as an active being is not about political affiliation. When industries like entertainment and academia, generally perceived as liberal, propagate the notion that Islam is a “thing,” then we have to accept that our cultural understanding is the same.

There are, of course, nuanced representations of Muslims, like the Academy-award nominated Timbuktu, the television show Bones, and politicians like U.S. Representative Keith Ellison (D-MN). Yet, when the beast is Islam, then the individual believers are irrelevant. It is no longer the people who make the religion, but the religion that rules the people. This worldview does contribute to Islamophobia, and Islamophobia has real consequences: mosques are attacked, people are knifed, and pushed off subway platforms. This happens despite evidence from counter-terrorism centers, the military, and law enforcement that the vast majority of attacks of mass violence in the United States do not involve Muslims except as victims.

This environment of disgust with an “Other,” is not unique to Muslims. Ta-Nehisi Coates of The Atlantic writes extensively on how cultural perceptions of Blacks affect policy, media, and academia. All of these are engaged with how a larger public, Black and non-Black, engages with Blackness. It is the same mechanisms that affects Muslims. It is no coincidence that Darren Wilson, who shot Michael Brown in Ferguson, called a young, Black man “demonic.”

As long as we continue to see Islam as a living being, rather than a religion composed of individual human beings, we rend the diverse fabric of the nation. It is not just about addressing religious illiteracy, or knowing the history of our own country, but about seeing another person’s humanity. A person does things, believes things, and she lives next door. She is the one who speaks, not Islam.