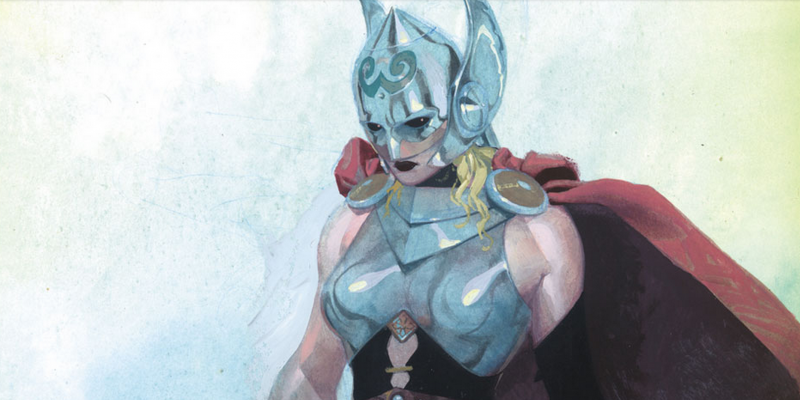 Jason Aaron, the current writer of Thor: God of Thunder comic book series for Marvel Comics, posted the following to Twitter on July 17:

Aaron’s comment came in the wake of Marvel announcing plans to feature a female Thor starting with a new Issue #1 in October. Over a forty-eight-hour news cycle, mainstream media featured Marvel’s big announcements, both of Thor’s gender swap and of the African-American superhero, the Falcon, assuming the mantle of Captain America in October as well. The View, The Colbert Report, The Wall Street Journal, and many other major news sources echoed what comics journalists knew for some time: Big change is coming to the superheroes.

All these news outlets missed, however, the core of Aaron’s tweet: Thor is, in fact, remaining the same.

Yes, starting in October, Thor will be portrayed as having breasts and hips. We will use the pronoun “she” and “her” when discussing the character. There may even be new (likely heteronormative) romantic interests for this Thor. But her power will remain the same, her custody of the enchanted uru hammer, Mjolnir, will still stand as her trademark, and her mission as a superhero member of the Avengers team continue unchallenged.

Most importantly, the status of her god(dess)hood will endure. He or she, Thor remains a god—and that fact puts the character beyond any traditional gender binaries.

Whether one is deeply religious or strictly secular, an individual will tend to anthropomorphize god. As Voltaire said, “If God didn’t exist, we would have to invent him,” and note the “him.” In order for many of us to envision divinity, we have to give it a human form, and, in giving it a human form, we likewise assign it gender. But, in being omnipotent, a monotheistic god would likely transcend all basic human boundaries, particularly physical ones like sex or constructed social ones like gender. (Even a polytheistic god is unlikely to be strictly male or female in the mortal understanding of those categories; it wouldn’t have or need the sex organs that our reproduction requires.)

So, even as Thor’s physical manifestation may be changing, the character’s godhood—a more essential trait than human-like sex or gender—is not. Our compulsive habit to assign gender binaries not only sidelines those in our societies who live in a grayer space (e.g. transgender, intersexed, etc.) but it also obscures the sublime complexity that divinity is meant to communicate. In Judaism, the plural Elohim is meant to signify God, just as the four-letter YHWH symbol or Hebrew words Adonai and Ha-Shem all provide a signifier for an unknowable signified. In Islam, the ninety-nine names of Allah convey the multiplicity of the divine’s aspects, and the shuffling pronoun usage of “we,” “I,” “him,” and “them,” to refer to Allah in the Qur’an likewise implies that the divine exists beyond any one category.

All this is not to strip Aaron and Marvel’s initiative of its value, though. It would be insultingly dismissive to say that Captain America being black doesn’t matter or that a female Thor is a non-story. However, it’s a story within a context and much of that context is being ignored. The fact that Thor has been a woman before (the Earth-X mini-series) is eschewed, as are, as any comics fanboy will tell you, all the others who have previously lifted Thor’s hammer to inherit the Thunder God’s powers. Moreover, these news announcements, while compelling, are also slightly disingenuous: many outlets previously carried word of Captain America’s death (he got better), Spider-Man becoming a person of color (in an alternate timeline), Superman’s death (he got better, too), a Muslim Green Lantern (briefly, before the original returned), etc. Even Thor’s brother Loki was female for a brief period, but no more. Superhero comics have a tendency to revert back to the norm after a sufficient amount of time. All those wowed by the news of a female Thor are likely unaware that the male Thor, the character readers have followed since 1963, will still grace the pages of Marvel Comics but without his powerful hammer, without his left arm (taken in some as-yet-unknown disaster), and without his title as a Lord of Asgard. Just how soon the now-unworthy, male Thor will resume his role is unknown—

—and, unlike Caucasian Steve Rogers inevitably relieving the Falcon of his new duties, the eventual de-feminizing of Thor will miss the point. If his Asgardian family truly is godly, then their gender is beside the point. To make them intractably male or female is to make them mortal. And the last thing anyone wants from their superheroes or their gods is that kind of fragility.

As the late George Carlin once quipped, “Men are from Earth, and Women are from Earth. Deal with it.” Thor, though, is from Asgard, and he or she brooks not with small minds.

A. David Lewis is a religion, English, and graphic novel polymath. He is also an adjunct professor at Bentley University in the English and Media Studies program. He can be followed @adlewis.