In our interview series, “Seven Questions,” we ask some very smart people about what inspires them and how their latest work enhances our understanding of the sacred in cultural life. For this segment, we solicited responses from Brett Hendrickson, author of The Healing Power of the Santaurio de Chimayó (NYU Press, 2017). 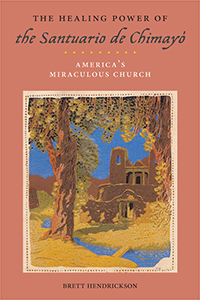 I moved from Arkansas to New Mexico as a teenager to attend an alternative high school, which turned out to be just on the other side of the Sangre de Cristo mountain range from the village of Chimayó where the Santuario is located. The church and its holy dirt didn’t make much of an impression on me at the time, but I did fall in love with northern New Mexico. It’s incredibly beautiful, New Mexican food is delicious, and I’ve spent some of my happiest times there.

In 2012, I did a little research in Albuquerque for my first book about Mexican-American folk and religious healing and really enjoyed being there again, now with my family. So when it was time to start a second book project, I figured I might as well pick a topic that would let me spend a lot of time in the state.

The Santuario, in many ways, was a perfect subject for me. It’s important in Latino/a religious history, it has to do with religious healing and popular devotionalism, and it’s in my beloved New Mexico. When I discovered no one had written a book-length history of the place, I was on it.

Let’s start with the sacred in the book. The sacred kind of piles up at the Santuario. The Santuario de Chimayó is the most visited site of Catholic pilgrimage in the United States—up to half a million people visit it every year. Several thousand walk miles to get there on Good Friday. In a side chapel of the building is a little room with a hole in the floor, the pocito, that contains the holy dirt. People have been collecting it for over two hundred years because of its alleged healing powers. The dirt is also associated with the miraculous apparition of a crucifix out of the soil of a Chimayó field. There is good reason to believe that the dirt of the area held healing properties for Tewa Pueblos even before the arrival of the Spanish. On top of that, the crucifix that appeared in the dirt is named for another miraculous crucifix in Guatemala, which is also surrounded by curative earth. Additionally, the Santo Niño de Atocha, an image of the Christ child who is important to many Latinos/as, has come to be associated with the Santuario and the holy dirt. Finally, since the whole place is stunningly picturesque, both aesthetically and narratively, it has become a huge tourist destination. As I show in the book, the tourist is often as likely as the pilgrim to encounter at the Santuario that which we might call sacred.

So far, I haven’t spent a lot of time trying to define “religion” or “the sacred” in my work. I tend to be more interested in how certain practices that most people would call “religious” come to be shared by diverse groups of people. For instance, why is the dirt attractive to Nuevomexicano Catholic pilgrims as well as to Anglo Protestant tourists, just to name two groups of people who come to the Santuario? If we just answer this question by saying: “because the dirt is ‘sacred,’” that doesn’t explain much. My work examines these shared attractions and the conflicts (and cooperation) that can occur when different people want access to the same place or the same practice.

The first: One of the main ideas I grapple with in the book is “religious ownership.” The Santuario was built by a Spaniard in the Spanish Empire. The place then became part of Mexico even as the owner also became a citizen of the new independent nation. When the United States took over New Mexico in 1847, the Santuario became part of this country. After that, the private family that owned the church sold it to the Archdiocese of Santa Fe in 1929. With all this regime change, I wondered who “owns” the Santuario and its holy dirt now? The answer, of course, is not straight-forward, but I think the question itself leads us to think seriously about various and competing claims people make on religious places, religious beliefs, and even specific ritual acts.

The second: All too often, we think of the American Catholic Church only as a church of immigrants. While immigration has been vitally important for U.S. Catholic history, there is also reason to think of Catholics as present on this continent before the boundaries of the nation expanded to their current scope. The story of the Santuario, a miraculous Catholic adobe church, is part of our complicated national heritage and helps us think in new ways about American Catholicism.

I wrote most of this book during my time as a Young Scholar in American Religion, which is a wonderful program offered by the Center for the Study of Religion and American Culture at IUPUI. My mentors, Laurie Maffly-Kipp and Doug Winiarski, are models of intellectual rigor mixed with humor, generosity, and kindness. The other Young Scholars from my cohort are inspirations of creativity, passion, and friendship. The farther I am out of graduate school, the more attracted I am to scholars who are not just smart but also great human beings to be around.

One of the trickiest things when writing about people from New Mexico is using the best terms for ethnic or cultural groups. It was a great reminder that there is not necessarily any unified “Hispanic” or “Latinx” identity that works for everyone who might be labeled as such. People who trace their ancestry to the Spanish in New Mexico often refer to themselves as “Hispano” or “Nuevomexicano,” though other terms are also used. Likewise, it can be difficult to refer to New Mexico’s indigenous people collectively without generalizing or excluding. All of these difficulties stem, of course, from our ongoing national experience of racial and ethnic prejudice. In this sense, the difficulty I encountered around ethnic terms is appropriate and part of what I hope is the work of doing better.

I’ve received positive feedback so far, though the book has just come out in the last month! The most unexpected response has to do with where I live on the eastern border of Pennsylvania, just a few blocks from New Jersey. Some folks from the greater New York metro area feel that where we live here in PA is just about as far west as the country goes, and they are shocked to hear that there is anywhere in New Mexico that draws half a million visitors a year. It’s been kind of funny to discover how provincial we all can be.

I’m just getting started on a new book project that will look at the role Catholicism and Catholics have had in making, maintaining, and contesting the U.S.-Mexico border. I hope to examine various episodes in the history of the border and understand much better how Catholic policies and Catholic identities guided how the border has been defined and how nationality has been experienced in both Mexico and the United States.

Brett Hendrickson is an associate professor of religious studies at Lafayette College in Easton, Pennsylvania. His research and teaching focus on the religious history of the Americas, the intersection of religion and healing, and religion in public life. In addition to The Healing Power of the Santuario de Chimayó, he is also the author of Border Medicine: A Transcultural History of Mexican American Curanderismo (NYU Press, 2014) and various journal articles and book chapters.