In our interview series, “Seven Questions,” we ask some very smart people about what inspires them and how their latest work enhances our understanding of the sacred in cultural life. For this segment, we solicited responses from Jennifer Graber, author of The Gods of Indian Country: Religion and the Struggle for the American West (Oxford University Press, 2018). 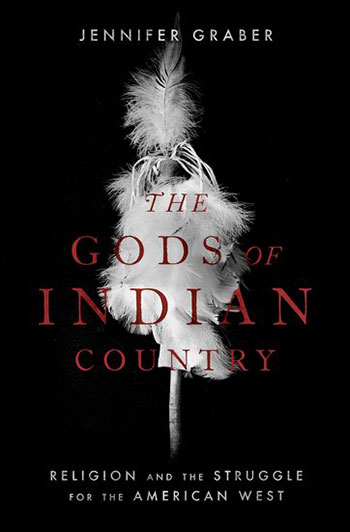 Short answer: drawings made by Kiowa men imprisoned for their resistance to American occupation. My first book was about New York’s antebellum prisons. As part of my background reading for that project, I came across multiple episodes of Native incarceration after wars fought with Americans. Back in 2007, I did some initial research about texts created about the 1860s imprisonment of Dakota Indians. I was interested in how missionaries thought about Native ritual life during and after confrontation with Americans. From there, I thought I’d write a book exploring religious transformations wrought by a series of conflicts we call the Indian Wars. The Kiowa story was going to be one chapter in that book, but then I found the artwork. I knew then that I needed a whole book to consider that artistic production and the religious worlds it depicted.

Broadly speaking, this book is situated within recent work about the cultural history of the concept of religion. The Americans in this book, which include Catholic and Protestant missionaries and reformers, invoked the word “religion” constantly, however their uses were slippery. Sometimes they meant a universal human impulse to connect with the supernatural. More often, “religion” served as a placeholder for their own particular traditions. Protestants, especially, talked about Indians’ need for “religion,” but meant a sort of generic Protestantism that Tracy Fessenden has so helpfully delineated. Every once in a while, some Christians living in Indian Country referred to Kiowa “religion.” Work by David Chidester reminds us to pay attention to such references. When did Americans call Native ritual activity “religious” and when did they withhold that descriptor? I track these usages (and their impacts) in the book.

In terms of Kiowa ritual activity, I mostly avoided using the word “religion” to describe it. I’m sure there would be ways to use it responsibly and I imagine other scholars might choose to do so. I stuck close to the language of ritual and practice, partly because Kiowa people did not invoke the English word “religion” to describe their activity until well after the period the book covers.

A crucial part of Kiowas’ survival of American occupation was their ritual interactions with sacred power – as well as their willingness to adapt those rituals.

Protestant reformers and missionaries interested in evangelizing Native people and settling the West constructed a notion of themselves as “Friends of the Indian” in contrast to Americans calling for a military approach to expansion. This constructed identity, with the army as its foil, allowed these Protestant workers to mask their support for and participation in other forms of colonial violence.

Catholic leaders and missionaries developed their own idea of themselves as “Friends of the Indian” by defending Native people’s right to access Catholic missions and schools. They connected Kiowas and other Native nations to their broader argument about Catholicism and religious freedom in nineteenth-century America.

Margaret Jacob’s White Mother to a Dark Race, which compares policies of indigenous child removal in the U.S. and Australia, was important. She inspired me to look closely at the domestic sphere, especially at the experiences of mothers and children, to trace colonialism’s impact. Jacob’s book led me to a whole slew of work on domestic or intimate colonialism.

Robert Orsi’s History and Presence, along with his earlier work, helped me find a language for describing and interpreting Kiowa ritual life. His concentration on religion’s relational quality helped me consider how Kiowas have interacted with supernatural power, a variety of powerful beings including animals and celestial bodies, as well as how Kiowas related to one another in light of these experiences.

Coming into this project, I was already familiar with the literature on Protestants and their evangelistic and social reforming activity. I knew a lot, but certainly not all of the literature on nineteenth-century American Catholicism. I had to train myself in some new fields of study, including Native American and Indigenous Studies (NAIS), the history of the American West, art historical and anthropological studies of Plain Indian material culture, and post-Civil War United States history. Writing that last sentence makes me think I was probably insane to try such a thing. To be sure, it was challenging, but it has also been the most exciting intellectual thing I’ve ever done. Learning about and joining conversations in NAIS has changed how I research and how I think.

Because the book came out recently, I haven’t seen a lot of responses yet, but the book jacket blurbs provided by two historians of the American West speak to the anxieties I had about potential responses. The project brought together scholarly fields that don’t usually intersect. For instance, most work on the American West doesn’t engage religion, although there is a cohort of folks working to change this. And most scholars in Native American and Indigenous Studies don’t engage the critical study of religion. And most work in American Religious Studies ignores Native American religions. Of course, I think we have lots to gain by bringing these fields together, but I had no idea how other folks might respond. I still don’t and have to wait for the reviews to come in, but the two western historians who provided blurbs showed a real appreciation for the book’s attempt to make religion central to the story of American internal colonialism. So I’m hopeful about other potential responses.

I have several small projects about Native religion and material culture I’d like to do, including some digitization projects that will make materials in museums accessible to the Kiowa Tribal Museum. But to be perfectly honest, I’m also planning to rest my brain and let it be filled again with new things. When working feverishly on a book project, you concentrate your research and reading efforts on what you need to accomplish your project goals. That means that other wonderful work falls to the wayside. I have a huge stack of books in American religions that I’m planning to read, books on alternative Catholics, religion and racial identities, the borderlands, the army, and national parks. That’s to name just a few. The contemporary academy hardly allows us to take a breather and functions to keep such pauses secret. I think this particular aspect of academic culture is destructive to us as people and also to the kinds of intellectual work that decent rest and health make possible.

Jennifer Graber works on religion and violence and inter-religious encounters in American prisons and on the American frontier. Her first book, The Furnace of Affliction: Prisons and Religion in Antebellum America, explores the intersection of church and state during the founding of the nation’s first prisons. Her latest book, The Gods of Indian Country: Religion and the Struggle for the American West, considers religious transformations among Kiowa Indians and Anglo Americans during their conflict over Indian Territory, or what is now known as Oklahoma.