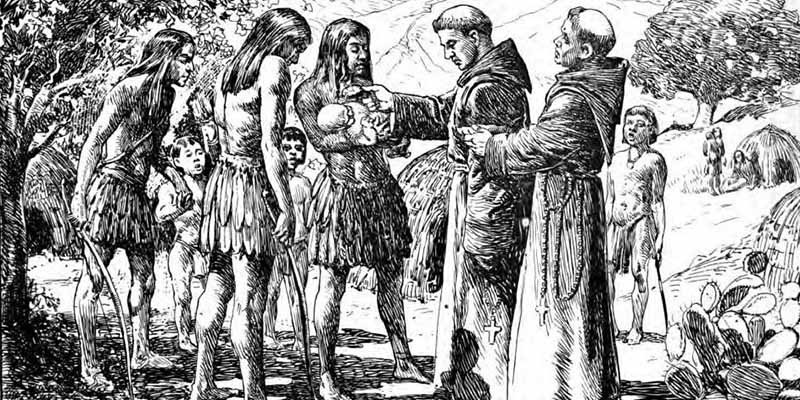 The presence and awareness of religion in the United States is overwhelming. We see so many different forms and variations; it plays a role in so many areas of social life. Religion is, indeed, an inescapable fact of our lives even though we can’t agree on what the hell it is; but it is not likely to disappear in the near or long-term future, and will certainly remain a constant force to be reckoned with as a critical factor in shaping future events. For obvious reasons, many in the media, universities, political think tanks, corporate worlds, polling outfits, and general public want to know the answer to the big question: how will religion affect the future?

But what if we flip the lens and ask not about the future, but the distant past: when does religion first emerge on the North American continent?

This is a dangerous but illuminating question to be sure, opening up heated conflicts about historical accuracy, collective memory, and political power in the past and even more so in America today. Religion doesn’t just show up out of the blue, one day when the wind is blowing on the great Plains, or the sun is shining on the Pacific coast, or the snow is coming down in the northeast. Or maybe it does.

When does religion first appear in North America? You would think this is an easy question to answer, but it is more complicated than it appears, with many more possible answers than you might first imagine. By asking about origins instead of future trends, we are reoriented to a very different set of questions about religion in contemporary society, as well as to intellectual traditions in the study of religion that are particularly curious about beginnings.

The origin of religious life in general human history is also rather difficult to pinpoint and highly controversial in public debates surrounding religion in the modern period. Does religion emerge in human life because God demands it, or perhaps it’s a result of playful gods looking to entertain themselves? Is it a consequence of human evolution, deeply buried in our primate past and expressed through altruistic behaviors and primal moral codes? Or, on the other hand, perhaps it is tied more to our aggressive instincts to kill or be killed? The origin of religion may reside in specific neural patterns and brain activity, an internal biological mechanism triggered by certain experiences and circumstances. Conversely, its beginnings may be tied to an external force or power, with revelations bringing a glimpse of otherworldly truths to followers who create institutions and rituals.

The question of origins spurs furious conflicts between religions and science, comparative assertions about commonality among different religions as well as across religion and science, and heated disagreements over whether religion is even real at all. A scientist will rely on the biological logic of evolution to argue about the emergence of religion in human history; believers of the Abrahamic traditions look to revealed scripture to answer question of origins and see the hand of God in the birth of the cosmos and human life; some with New Age interests will look to ancient writings and wisdom that unlock the mysteries of the shared spiritual sources of human religion.

It is safe to say that humans will never agree on the answer to the question of where religion comes from, ultimately. This makes it especially difficult to answer an even less general, more geographically specific question: When does religious life begin in North America? Even if we can’t agree on the source of religion in human history, surely a more narrow and regionally focused inquiry can yield consensus and certainty. For most of American history, the answer was obvious: “true” religion arrived with the Pilgrims who landed on Plymouth Rock. The activities of the native peoples encountered by Europeans did not display “real” religion, but were misguided, delusional, or even, for many, in league with the Devil.

But today such a simplistic, theological response will not do. Questions about the origins of religion on the North American continent are highly contested and divisive. Like any question about religion, it all depends on whom you ask. The origins and histories of religious life in America are difficult to trace, not because of lack of evidence or viable theories, but because so much is at stake for the many interested parties who claim to have the correct answer to this question. After all, how you answer this will establish the boundaries of true religion versus false religion, or will raise the possibility that religious boundaries are completely arbitrary and conditioned by historical circumstances.

When does religious life begin in America?