In our interview series, “Seven Questions,” we ask some very smart people about what inspires them and how their latest work enhances our understanding of the sacred in cultural life. For this segment, we solicited responses from Jeff Wilson, author of Mindful America: The Mutual Transformation of Buddhist Meditation and American Culture (Oxford University Press, 2014).

My projects usually consider how Buddhist and non-Buddhist religion and culture encounter and affect one another.  At a certain point, it became impossible to avoid encountering discussion and practice of mindfulness in American culture, so I felt that turning my attention to the phenomenon would help me investigate how Buddhism operates in the United States.  Then as I started collecting examples of how Americans were actually using mindfulness, I became ever more intrigued with the incredible constellation of applications with which mindfulness is being associated.  Many of these are not only new, but actually diametrically opposite or even opposed to how mindfulness was used in Asian history.  That process, whereby mindfulness became so indelibly American that it could be easily applied to sex, diet, parenting, work productivity, and so on was just so fascinating that once I started looking at it, I couldn’t tear myself away. 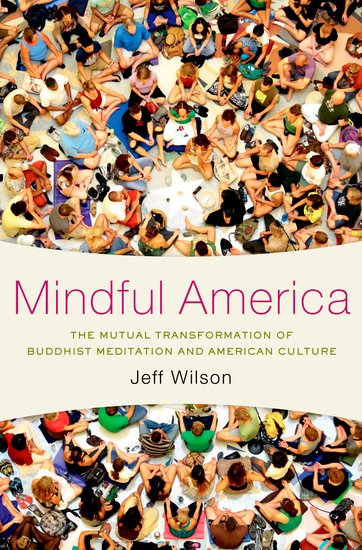 In a very real way, the fluctuating border of the sacred and the mundane is the primary topic of this book.  Much of what has happened with mindfulness is that Americans have strategically stopped labeling it as Buddhist or religious, so that they can attract a larger clientele population or insert it into areas where religion would be inappropriate, such as the public schools.  But they don’t change the actual practice very much at all: the mental techniques they’re using are still very similar to those employed by Buddhists past and present.  So is this Buddhism or not?  Is it genuinely secular if we just label it secular?  And is anything really secular if we have to label it “secular”—doesn’t that automatically raise the issue of religion?

I don’t really define religion in the book.  Rather, I examine how and when various proponents of mindfulness define it as religious, spiritual, secular, medical, scientific, and so on.  The really interesting thing is that mindfulness can be simultaneously religious and secular, spiritual and scientific, not only for different people but even for the same persons.  This demonstrates just how much the category of “the sacred” is in flux in today’s society.

Americans adapt Buddhism to fit their culturally-specific needs and desires, rather than adjusting themselves to the traditional demands of Buddhism.  Nonetheless, this should not suggest that American appropriations of Buddhist meditation are automatically inauthentic—Buddhism always changes when it crosses cultural borders, and this flexibility is a key element of what has allowed Buddhism to survive and thrive for so many millennia in so many different societies.  Furthermore, even as Americans make major changes to Buddhism, Buddhism is still significantly impacting American culture and bringing about new possibilities and practices in mainstream lifestyles, so the process of influence is very much a two-way street.  Those are the three primary points of the book.

Probably the two single biggest inspirations were George Tanabe and Ian Reader’s Practically Religious and Kathryn Lofton’s Oprah: The Gospel of an Icon.  I read Tanabe and Reader as a graduate student and was so impressed with their depiction of the pursuit of practical benefits in Japanese Buddhism that it fundamentally affected the angle of view I often take with Buddhism.  I read Lofton’s book a few years ago and it taught me that there was a whole realm of possibility in religious studies that I hadn’t known was allowable or feasible before.  It is at the intersection of these two fields—Japanese Buddhism and American religion—that I locate most of my own research projects, so it’s fitting that a book from each contributed so heavily to my ideas about how to study mindfulness.

The incredible variety of the mindfulness movement and its sheer size were daunting.  I had to read hundreds of books, many hundreds of articles and web pages, and absorb significant amounts of secondary literature on everything from neoliberal economics to the global dissemination of sushi.  This is the first book I’ve done which isn’t specifically fieldwork-based, though it does rely on my many years of observation of the mindfulness movement at meditation centers, temples, universities, and elsewhere.  Shifting gears into textual analysis and a cultural studies perspective took some work after so many years of anthropological methods and concerns.

The most unexpected response isn’t any specific reaction, but rather the surprising range of responses.  Many readers seem to be invested in trying to figure out my feelings toward the mindfulness movement, especially whether I am supposedly pro- or anti-mindfulness, even though I state explicitly in my introduction that I have no interest in taking sides.  Strong proponents of mindfulness (often with a heavy economic stake in the success of the movement) sometimes feel that they are under attack.  They aren’t used to anything but positive press about mindfulness, so they feel uncomfortable with an analytical perspective that doesn’t engage in boosterism.  They tend to react by claiming that because my depiction of some aspects of the mindfulness movement doesn’t match their own personal experience, therefore my analysis is somehow wrong, and that anyway if there are problems in the movement we should concentrate on the good it does.  Meanwhile, I get a steady stream of requests from readers who think I’m promoting mindfulness, often with the hope that I will teach them how to be mindful or help them develop their own mindfulness-connected business ventures.

Both of these reactions are pretty far off-base.  My goal is to analyze how the total mindfulness movement operates as a rapidly-evolving cultural phenomenon derived originally from Asian Buddhist meditation traditions but now subject to contemporary North American social, economic, technological, and political conditions.  I’m not invested in the success or failure of mindfulness, nor any of its particular manifestations or applications.  I want to understand how it works, not help it work or prevent it from working.  Privately, I have no doubt that mindfulness benefits significant numbers of individuals in various ways, though on the other hand claims about mindfulness very frequently outstrip rigorously demonstrated effects, and it is possible for a phenomenon to be both helpful and harmful, of course.

I have a book coming out later this year, a co-edited collection of writings by the major Japanese Buddhist scholar D.T. Suzuki, which focuses on Suzuki’s work on non-Buddhist religions and philosophies.  I also have a slew of new articles about mindfulness that are slated to appear in the next few years.  As for the next book, I’m toying with several ideas—it’s hard to choose!  This is such an exciting time to be researching the encounter of Asian and North American cultures.

Jeff Wilson is Associate Professor of Religious Studies and East Asian Studies at Renison University College (University of Waterloo). He is also the author of Mourning the Unborn Dead: A Buddhist Ritual Comes to America (OUP 2009) and Dixie Dharma: Inside a Buddhist Temple in the American South (UNC Press 2012).