In our interview series, “Seven Questions,” we ask some very smart people about what inspires them and how their latest work enhances our understanding of the sacred in cultural life. For this segment, we solicited responses from Eric Reinders author of Buddhist and Christian Responses to the Kowtow Problem in China (Bloomsbury Academic, 2015).

1.What sparked the idea for writing this book? 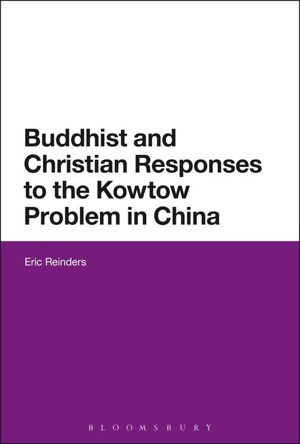 Buddhist monks claimed exemption from the obligation to bow to the emperor of China, because although he was the emperor he was still laity. I’d read some of the polemical literature from the fourth and fifth centuries CE, but in 662 they actually had an imperial debate, not just an exchange of documents but a big meeting, which was documented quite well. One of the principal agitators was the monk Daoxuan, who also wrote a treatise on bowing. So here was a chance to look at a wide range of views about bowing and refusing to bow. I do love the idea that there was this group of people who could walk up to the most powerful man in the world and not bow.

In the abstract, I deal with sacred as a relational category, part of sacred/profane. So my focus is on the boundaries and intersections. And the issue in the bowing debate was what happens when a representative of Buddha’s domain comes face to face with the pinnacle of secular power? Although, “secular” is misleading here, since the emperor’s body was thoroughly sacralized. So it was more like two competing sacred domains, embodied.

First is a matter of definition. I had to reject the idea that the act of bowing could be defined by some specific meaning or mental state. People say, it’s an expression of respect, or it’s act of worship, and so on. But I say, a bow is a performance of a vertical distinction. All it does is perform a difference of lower and higher.

Second, what that difference of higher and lower means depends on the entire context, and it’s a mistake to decide it only has one fixed meaning. For the most part, it has meaning through complex analogies to other distinctions. For example, in not bowing, the monk is like a foreign ambassador, or a soldier in armor.

Third, if the bow is a performance of a vertical distinction, then we can include saluting the flag as a form of obeisance. It achieves its distinction by raising the object, at the top of a pole whose sole function is to make the flag higher than us. Similarly, the lowered gaze is a form of obeisance, and there are many kinds of rhetorical obeisance as well.

4. Who were your inspirations or intellectual models as you wrote this book?

I had always been interested in Buddhist monasticism, but frankly rather bored by what I read about Vinaya. Then I read Foucault’s Discipline and Punish about the making of the soldier’s body and I thought, yes, there might be a way to talk about monastic discipline in a new way. Then there was an article by my advisor Bill Powell, where he describes some old women teaching their grandchildren how to bow in a temple totally gutted during the Cultural Revolution. Sacred space can be something created entirely by bodies.

Daoxuan had a tendency to say “As the sutra says…” And he also misquoted a lot. When I first started translating these texts, in the pre-internet age, it was very hard to find those citations. Now the Buddhist Canon is searchable online, I can find most of these, or close matches. Or in a few cases I can say with confidence, I have no idea what he’s quoting.

When I talk with Western Buddhists about bowing, sometimes I get an intense, visceral rejection of bowing, unless somehow the act can be sanitized of its associations with idolatry or abjection. I’ve been told that bowing to the Buddha image is in fact bowing to the Buddha-nature in oneself, which is mighty convenient. For many, it’s a shock to find that obeisance is totally normal and expected in Buddhism. Of course, just because millions of other Buddhists bow to the Buddha doesn’t mean you should. I really don’t care if you bow or not.

I am currently finishing a book on the films of Hayao Miyazaki, and then I get back to my project on comparative imagination (especially Chinese translations of English fantasy works, and vice-versa). But in terms of the early Tang dynasty, I’d still like to write some sort of intellectual biography of Daoxuan.