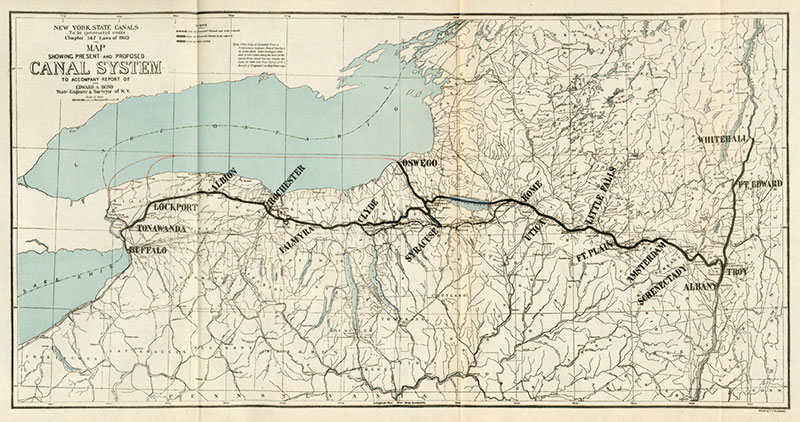 If you drive into Palmyra, New York, today you’ll come upon a site not unlike what the Mormon founder Joseph Smith saw two hundred years ago: a cluster of four tall steeples rising from four Protestant churches. Presbyterians, Methodists, Baptists, and Episcopalians confront each other at adjacent corners of the town’s crossroads. Though they aren’t the same steeples as in Smith’s day, the inter-denominational face off was already in force, leading Smith to reflect: “There was in the place where we lived an unusual excitement on the subject of religion. . . . Priest contended against priest, and convert against convert so that all their good feelings one for another were entirely lost in a strife of words and a contest about opinions.”

In a newly settled land rife with new religious movements in direct competition for people’s souls, Smith was able to work within the discord to form something fresh and novel. As is well known through contemporary caricature and acclaim alike, he forged one of the most powerful religious traditions operating in the world today.

What isn’t so well known is that the origins of Mormonism, like the origins of many American religious practices and beliefs, are deeply bound up with the birth of the Erie Canal, on whose banks the town of Palmyra grew. The early lives of both Joseph Smith and Brigham Young were nourished by canal-based social and economic developments, and ultimately the printing and distribution of the Book of Mormon would not have had an impact without the canalway.

Alongside many other New Englanders at the time, Joseph Smith’s family moved to the Palmyra area in 1817 when Joseph was twelve years old. The land was fertile for farming, though the area was still quite remote. All of that was about to change, for in that same year construction of the Erie Canal began between the towns of Rome and Utica a hundred miles east. By 1823, the canal was opened between Palmyra and Rochester, establishing the once-remote outpost as a regional commercial center: prosperity grew along with the population and farming became an even more fruitful endeavor.

Lying fifteen miles south of Lake Ontario and twenty miles east of Rochester, Palmyra was dubbed “Canal Town” in the 1944 novel by Samuel Hopkins Adams, and its links with the waterway are vital to the beginnings of Mormonism. By 1825, the Canal stretched 363 miles from Albany to Buffalo, creating economic boomtowns along the way and generating strong spiritual excitation and experimentation as settlers moved further from the ecclesiastical authorities of the East.

Soon after settling in the area with his family, the young Smith began having visions of heavenly beings as he walked in the pristine forests surrounding the small settlement. In 1827, Smith tells us, he found golden plates with ancient inscriptions on them at nearby Hill Cumorah. With the help of close colleagues, he set to translating these into what became the Book of Mormon. Also around that time, a printing press was shipped from New York City by canal boat to Egbert Grandin’s print shop, located in the heart of the burgeoning canal-fed commercial district of Palmyra, among the various Christian churches. Had it been five years earlier, the transfer of a 1500-pound iron printing press from New York City to Western New York would have been nearly impossible, but now the canal allowed an unheard-of ease in commercial transportation.

Five thousand copies of the Book of Mormon were printed in the shop, an optimistic number that exceeded literate souls in the town. By then, canal boats heading west and east were transforming not only the economic life of the area but also the social and political arenas. The waterway facilitated the distribution of newspapers, tracts, and books, alongside itinerant preachers, reformers, and industrialists, connecting socio-religious ideas and practices from the Eastern seaboard to the heartland of the American continent. Alexis de Tocqueville, the French diplomat who traveled the United States at the time, spending time on the packet boats of the Erie Canal, noted that there was “hardly a hamlet in America without its newspaper.” Transportation technologies helped lead to a rapid rise in literacy rates in the young nation, which in turn created demand for more printed material, which various religious organizations helped supply.

Smith’s Church of Christ (Latter-day Saints) officially formed the same year the first run of the Book of Mormon was printed. The community was a small but loyal assembly. But because of the “strife of words and a contest about opinions,” inter-denominational dispute followed, forcing Smith and his followers to leave town. In 1831, they packed their belongings on a canal boat and began the great trek west, starting with a trip across the Erie Canal to the western lands of Ohio.

One of those who would read the Book of Mormon, and become convinced of its truths, was Brigham Young. While Young is often associated with the western lands of Utah, it was the Erie Canalway that nurtured him in his formative youth. Like Smith, Young too was born in Vermont. Like the Smiths, the Youngs also sought more fertile soil in New York state, arriving in 1804. Young was sixteen when construction began on the canal in 1817. He left home that year, finding work as a carpenter and painter. Then, in Bucksville (renamed as Port Byron when the entire canal opened in 1825), he built and painted canal boats. As the area grew rapidly while the canal extended across New York state, his skills were in constant demand, and even today his mark is left on furniture and buildings across the canalway.

By the late 1820s, Young moved just south of the Rochester area. Rochester was one of the richest boomtowns along the Canal, and became the site of many religious and social reforms during the second quarter of the 19th century. In 1830 the preacher Charles Finney took a canal  boat to Rochester and, over a six-month period between 1830-31, held one of the largest revivals in the history of the United States. The area retained an “unusual excitement on the subject of religion” for years to come, and in 1848, just east of Rochester, the Fox sisters famously communed with a spirit, launching the global phenomenon of “Spiritualism.” All of the work of these new movements was spurred by the ease of communications that the canal engendered.

In this area, in 1830, Young encountered the Book of Mormon through his brother, Phinaes, eventually converting to the Mormon faith, and challenging him to pack up and head west. Starting out on a canal boat, he met up with Smith and the Mormon contingent in Kirtland, Ohio in 1832, eventually leading the Mormons west, bringing along the knowledge and know-how he had learned along the canal. His leadership was as much a matter of the practical, hands-on skills he learned along the canal as it was about any theological command.

The Erie Canal in modern oblivion

Religious groups took various routes out of the area, often seeking ever greener pastures to the west. Many groups that began along the canal, like the Mormons, Spiritualists, and Adventists, spread to remote corners of the globe. Others slowly faded into the landscape. But regardless of whether the religions moved, survived, or disappeared, particular beliefs and behaviors continued to flow from this ribbon of land and have remained part of the particular practices across the westering United States.

The old canalway became the path for the railroads in the 1860s, which began the canal’s decline in importance, and then the interstate highways, which made overland travel the choice of transportation through the twentieth century. Technology is layered on technology and the canalway is today a geographic palimpsest, a surface on which is written older histories: the stories have been erased but are still legible between the lines.

Today’s Erie Canal is a study in ruins. There are still boat tours of sections of the canal–or, of the third version of the canal, redug in the early twentieth century when waterways had already passed their usefulness. New York State tourist offices have attempted to fit the canal into their hospitality industry and every few years someone kayaks the length of the canal, taking advantages of the locks and smooth waters, and then writing about the experience with a mix of wistfulness and triumph. Overall, nostalgia remains.

In recent decades, members of the LDS church have been returning to the lands along the canalway. In 1999, they built a small temple in Palmyra, and the annual summertime Hill Cumorah Pageant in nearby Manchester brings tens of thousands of Mormons to the eponymous hillside to witness a spectacular reenactment of the Book of Mormon. While in the area, visitors/pilgrims can go to Joseph Smith’s home and walk through the Sacred Grove where a young Smith began having his visions. Later, the pilgrims might head over to Palmyra and check out Grandin’s print shop, now an LDS visitors center. But only every once in a while do people peek behind Main Street to see the canal still flowing behind the shops.