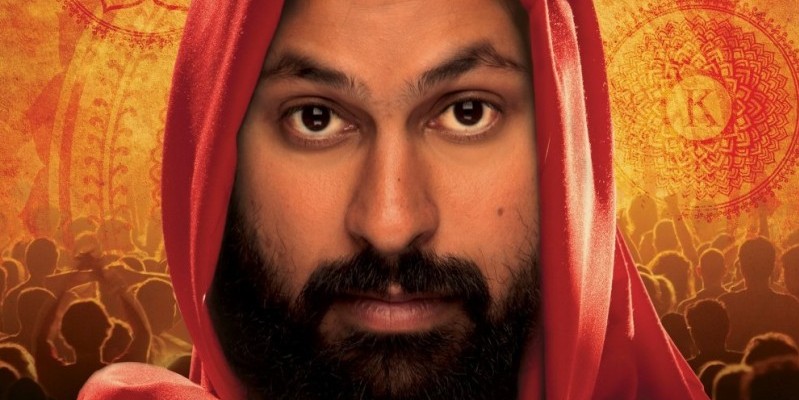 In Sanskrit, the term guru is defined as: “important,” “valuable,” “respectable,” and “heavy,” in addition to the definition that finds more currency in 21st century America: spiritual teacher in a general “Eastern” tradition. There have been a number of recently published works analyzing the role of the transnational spiritual guru in modern day America (Gurus in America, Transcendent in America, and Homegrown Gurus to name a few), but ethnographies of transnational South Asian religious movements in the United States have yet to explore the experience of joining, belonging, and reflecting within these communities from the perspective of the devotees. The 2012 film Kumaré, directed by and starring Vikram Gandhi, attempts to do several things. Mostly the film reflects on the nature of the guru in American culture and (Eastern) spirituality, but additionally it gives us a peek into the construction of a devotee community in an ever-transforming American-Eastern spiritual culture. Though the film’s methodologies may elicit more questions than answers on the goals of the film and the efficacy of its narrative, Gandhi does explore important questions that reach beyond modern spiritual communities in the United States: How do devotees of a teacher come to relate to, trust in, and cultivate faith in a guru and his message? What is the role of the guru, the teacher, in a transnational religious community?

Kumaré begins with Vikram Gandhi’s mini-autobiography of his life as a second–generation American born to immigrant parents, living the typical life of a young kid raised as a Hindu in New Jersey (the complexities of which are beyond the scope of this review). Gandhi begins to question his religion during his adolescent years and there we find the seeds of this film. Following a sense of frustration with Hindu traditions, Gandhi seeks to find an essence to religion, a essence in which he can find comfort, safety, and faith as his grandmother does in her calm, simple morning rituals. He looks towards gurus in the United Statesand finds charlatans; he goes to India to find authentic gurus and finds less-than-holy characters; finally, he returns home to ask if just anyone could become a guru – a question that leads to the thrust of this film: Why is it that individuals put so much faith and trust in a guru? How is a guru created? Can one find faith and, as Gandhi asks, “peace in a made up religion as they do in a real one?”

To this end, Gandhi decides to conduct an experiment. With the help of handy sidekicks (an actress/yoga practitioner and an actress/business manager) Gandhi transforms himself into Kumaré, a fake spiritual teacher from a fake village in India, with fake yoga postures, fake mediation techniques, and fake teachings, who makes his temporary spiritual base in Arizona. The big irony of the film is that the guru who posits himself as fake in every possible way (including teachings that emphasize his fakeness, and his illusory nature) turns out to be the most trustworthy, real guru that his small group of followers had ever met. Through aggressive networking, travel, and a lot of hard work, Gandhi/Kumaré gains a small group of fourteen followers from yoga centers, word of mouth, and self-help groups who end up taking an “initiation” into his “lineage.” It is at this time, after weeks of one-on-one contact that amounts to some of the most involved and caring therapy money can’t buy, that Kumaré attempts to reveal his “true” nature. This first unveiling, however, doesn’t take for him or his followers, perhaps because it simply feeds into the “fakeness” narrative that the followers were already familiar with. Gandhi moves back to New York but stays in touch with his devotees. It’s at this point of the documentary where things become a little thin, a little rushed.

The editing of the film, while building the narrative of Kumaré’s genesis, began to lose sight of Vikram. While the film begins as a self-exploration of what a guru could mean through the transformational reflections of one man, the film ends thinly with little narration from Gandhi and montage sequences that lack the weight of the rest of the film. While Gandhi’s narration subsides as the film progresses, in the end, all we are treated to are a few minutes of film where Gandhi looks obviously depressed. We don’t really know why, though we can guess that he is having withdrawal from one of the most intense and intimate experiences of his life. The editing juxtaposes these scenes with those of his followers, living their newly transformed lives in Arizona, succeeding at changing their lives for the better. The film ends with Gandhi returning to see his followers, finally beard- and accent-free, to a mixed response at real “The Unveiling.” Most of his “students” stay in touch with him as Vikram, seeing the entire experience as positive, though a few never speak to him again. Gandhi ends the film without any reflection, resting on the emotional climax of the final unveiling to say what, for whatever reason, was not spoken: the guru is just a person, but through the devotee the guru becomes bigger than life – the exemplary figure of what you can achieve.

Kumaré, though a thought-provoking documentary, felt almost like a Sacha Baron Cohen film in that the filmmakers seemed to relish in the awkwardness of interactions between Kumaré and his naive students. Though more documentary film than social satire (less Borat than one may think), one never gets too comfortable in the deep and moving confessionals of Kumaré’s followers as the viewer is constantly reminded of the fabricated aspect of the entire project. Setting aside questions about this obviously problematic methodology, Gandhi had the opportunity to make a statement on the experiential aspect of spiritual-religious communities in modern day America and the role of the transplanted teacher, the socially constructed guru. Unfortunately, as this film is intended for an American audience, we are treated to only the American guru phenomenon without the alternate transnational, or even Indian side of the same phenomenon, another dimension that is often disregarded when considering modern transnational spirituality traditions transplanted in the United States. The very basis of the film puts into stark relief the nature of religion as a construct and argues against its sui generis essence, but in the end, with all these weighty questions and concepts, the film seems to fall flat. When the curtain falls away and all we are left with is a thirty-something filmmaker, somehow the weight of the guru isn’t really felt anymore. Kumaré leaves the tough questions about gurus for another day.

Anandi Leela Salinas is a PhD student at Emory University in the Graduate Division of Religion and Associate Editor at Sacred Matters Magazine. Her PhD research is focused on the contemporary practice of darshan in Hinduism and ethnographic film.
By The Editors
Contributed Article-For Homepage, Contributed Articles, Holy Archives, Sacred Guests Tags: American CultureAmerican religiondocumentaryfilmguruHinduismIndiaKumarespiritualityVikram Gandhiyoga