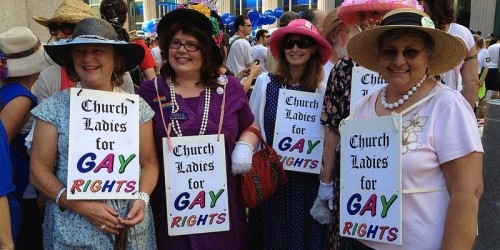 Ask someone born after 1980 whether they know anyone who has left his or her childhood religion and the answer will likely be yes. In fact, many Millennials, adults who are between the ages of eighteen and thirty-four, could probably name more than one. Roughly one-quarter (24 percent) of Millennials have abandoned their childhood religious identities and now claim no attachment to organized religion. And this is more than just a life cycle phenomenon; today’s Millennials exhibit a greater propensity to leave their childhood faith than any previous generation. Now, a survey from Public Religion Research Institute sheds new light on an important factor in Millennial disaffiliation: negative church teachings about, or treatment of, gay and lesbian people.

The high rates of disaffiliation among young adults have prompted much hand-wringing among religious leaders and a cottage industry of manuals to help guide wayward Millennials back to the pews. But when it comes to identifying the forces responsible, there has been a woeful lack of compelling evidence. The new PRRI survey offers some of the most direct evidence to date identifying one of the factors responsible. When Millennials who had left their childhood religion were asked what role negative religious teachings about or negative treatment of gay and lesbian people played in their decision to disaffiliate, about one-third (31 percent) say it was either a very important or somewhat important factor. In other words, one out of every three Millennials who left their childhood religion say that their former church’s posture toward gays and lesbians played an important role in their decision.

Today, nearly one in three (32 percent) Millennials identifies as religiously unaffiliated, making it the most common religious identity among this politically and culturally important cohort. It would overstate the findings to suggest that the treatment of gay and lesbian people is the only reason for historically high rates of non-affiliation among Millennials as previous surveys have shown that the reasons Americans give for leaving religion vary widely, and Millennials certainly make these decisions based on a number of factors. But for churches with aging congregations, maintaining a posture that stands increasingly at odds with young people is unlikely to prove a sound strategic decision over the long term.

Daniel Cox is director of research at the non-partisan Public Religion Research Institute. Along with PRRI CEO Robert P. Jones, Cox is a principal author of the new report, A Decade of Change in American Attitudes about Same-sex Marriage and LGBT Issues (2003-2013). [ATF2] The report is based on PRRI’s LGBT Issues and Trends Survey, which was released on February 26, 2014.  With 4,509 interviews among a random sample of Americans, the study is one of the largest public opinion surveys ever conducted on LGBT related issues.